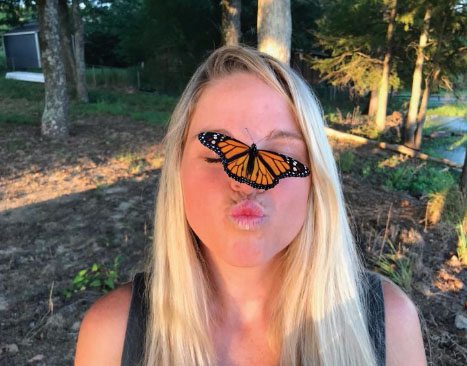 When you think of Arkansas, what comes to mind? Do you think of the Ozark Mountains, the Delta and its flatlands or our bountiful lakes and rivers? No matter what you envision, it’s obvious that Arkansas has no shortage of natural attractions. And now we have media-savvy YouTubers who are showing the world what we got.

If you haven’t been spending the past 12 years living in a secluded cabin and obsessively writing a manifesto, you’re at least passingly familiar with YouTube. The Google-owned video platform reported that 73 percent of U.S. residents regularly use YouTube; 60 percent saying they visit the website on a daily basis. It has 2 billion unique visitors every month, and over a billion hours of content are viewed every day. These numbers have grown steadily since YouTube’s 2006 launch.

Considering YouTube’s massive popularity and user base, it’s surprising that until recently there were essentially no prominent Arkansan YouTubers. However, about a year and a half ago, a young couple, Jessica “Jay” and Cole Harken, saw this niche and have quickly worked to fill it while simultaneously showcasing Arkansas’ verdant beauty and wildlife, focusing mainly on fishing and getting bitten by snakes while attempting to catch them barehanded.

The Harkens met while studying wildlife conservation and management at Arkansas State University. They quickly hit it off, both being passionate about the outdoors and sharing a hometown, Conway. Unlike Cole, who by then was an old hand at herping (searching for reptiles or amphibians), Jay had never caught a snake before they began dating, although it turned out that catching snakes in muddy streams was a surprisingly easy sell for her.

Cole: We were catching trout on our first fishing date, and there were some snakes out on the bank. I told her, ‘Hey, let’s catch one.’

Cole: The snake bit her immediately.

Improbably, Jay says that initial experience actually helped her lose any fear of snakes, finding that getting bitten by one didn’t really hurt all that much. Jay began joining Cole on more fishing and herping trips and after a quick courtship, the two got hitched. Spending most of their free time in kayaks or on riverbanks, the idea for “Cole & Jay” — their future YouTube channel — began to take shape.

“We’d both enjoyed documenting our outdoor adventures, fishing and herping, and sometimes posted them on social media,” says Cole. Initially, they only put up these posts for their friends and family, but things would soon change. “In June 2018, I posted a Facebook video of me holding a huge diamondback water snake,” Jay says. “It went viral. I think it wound up with around 20 million views. With all that attention, we decided to start a YouTube channel, and already having a viral video jump-started our channel.”

She wasn’t kidding about how fast things began to move. Within three months, their YouTube videos had been watched over 4 million times. Today, their channel has 126,000 subscribers and their videos have been viewed around 16.3 million times, averaging roughly 860,000 views per month. According to a study from the Offenburg University of Applied Sciences, the top 3.5 percent of YouTube’s most-viewed channels average one million views per month, placing “Cole & Jay” easily in the top 7 percent of YouTubers in terms of popularity and views.

There are several possible explanations for the Harken’s quick rise on the internet.

“Well, we’ve tried to see which videos we make that people respond to and capitalize on that while it’s still getting a response,” says Cole. “It’s like riding a wave; there are highs and lulls, where a video will pop off and get hundreds of thousands or even a few million views, and each time you get a jump in subscribers, then things drop off a bit until the next big video.”

The Harkens have followed in the footsteps of other popular YouTubers in other ways. If you look over their page, you’ll find that Cole and Jay are extremely fond of exclamatory titles, like “Jay catches GIANT SNAKE and gets BIT!,” or “Our DOZENS of TARANTULAS have HATCHED and have OVERRUN OUR HOME!! (I may be exaggerating that last one.) While this strategy does seem sort of “clickbaity,” the term clickbait implies that the video is trying to mislead people, tricking them into clicking on it by presenting one type of content while not providing it, but this is not the Harkens’ game. 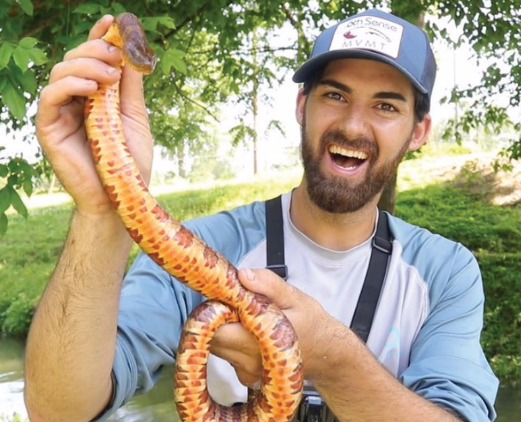 “All of the successful channels we’ve watched usually have bold titles and attractive thumbnails,” Cole explains. “Being exclamatory and emphasizing certain action words catches people’s attention and helps us stand out in YouTube’s oversaturated fishing genre.”

This begs the question: Who is watching these videos? Who are the Harkens catering to?

“We don’t aim for a particular audience,” Cole says. “Recently, we’ve been getting more interest from people around our age [mid-20s to mid-30s] but when we started, it seemed we were most popular with older people in rural areas.”

He believes this was due to their older audience’s nostalgia for outdoor activities they once enjoyed. “We got a lot of comments saying things like ‘I used to do this when I was young, but now I’m too old,’ so I guess they sort of live vicariously through us,” says Cole. “As we’ve grown, our audience has evened out.”

A Day in the Life

The video titles may be a bit over-the-top, but they do deliver exactly what their titles claim. This practice of using excitement-inducing titles and capitalizing on video trends within YouTube’s outdoors genre is evident in their channel’s biggest hits. Of their 19 videos with more than 100,000 views, seven involve one or both of them bitten by a variety of critters and four present the Harkens catching, cleaning and cooking fish and frogs. Three months ago they published their second video to garner more than 3 million views, wherein they took a break from the normal schedule of wading through streams and grabbing at snakes to perform a delicate and successful wing transplant surgery on a monarch butterfly. 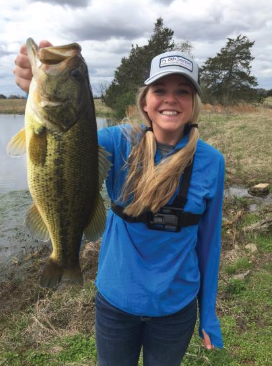 Despite their apparent predilection for getting bitten by snakes, “More than we can count,” according to Jay, it’s not due to a lack of expertise. “Most of our bites come from water snakes in muddy water. In order to grab that snake and bring it in close to the camera to educate viewers about the species, you just have to go for it,” he says. “When you first grab them, it’s easy for it to whip around and bite you, unless you shake or whip it around, which would injure the snake. We’d rather get a quick, harmless bite and then get them under control instead of hurting the animal.”

“But we’d definitely not want to encourage people to go out and get bitten by snakes,” Jay adds.

“Cole & Jay” is fully run by the titular two, as a total cottage industry. Both are equally responsible for recording video in the wild. From there, Jay downloads and edits the day’s clips, then they sit down together to decide how the video should look. Then, Cole works on video titles, tagging and descriptions while Jay schedules and posts the finished product. Depending on the season, the Harkens are out fishing or herping every day, filming all the while.

Jay: Anything we do, we bring our cameras with us just in case something happens. Sometimes it doesn’t work out — we don’t catch anything or find anything interesting — but we want to always be prepared.

Cole: Yeah, we always have to be ready because we don’t stage our fishing and herping videos. Keeping things authentic and our reactions natural is really important to us.

This quick success inspired the Harkens to make creating content for YouTube a full-time job, joining the YouTube partnership program to monetize their videos. While it’s rare for YouTube creators to turn their online hobby into a full-time job, with such a large body of viewers and interested advertisers, it is possible.

Despite the fact that most YouTube viewers access the website on mobile devices, an independent study (Cowen & Co., Cowen Proprietary Tracking Survey, Feb. 2019) of 2,500 American adults found that 17.7 percent of those aged 18 to 34 reported they mostly use YouTube to watch video content on their TVs which is second only to Netflix (38.6 percent).

It’s important to note that Netflix does not carry advertisements, instead relying on paid subscriptions. In contrast, YouTube’s entire business model is built around supporting freely accessible content with advertisements. YouTube earns revenue through Google AdSense, where YouTube Partners like the Harkens can earn 55 percent of what advertisers pay Google for ad views and clicks. In short: There’s gold in them digital hills.

Just how much gold, however, is highly variable. Advertisers pay YouTube based on how many people watch their ads, called the Cost per Mille (CPM); mille being the Latin word for thousand. CPM changes based on the type of advertisement and content, how long the ads are and if viewers hit the skip button. Youtube isn’t particularly keen to share details of its monetization policy, but CPM in the United States averages from $4 to $8 per thousand views, from which YouTube takes its 45 percent cut, which can be surprisingly deep. Most YouTube Partners find it difficult to make a living from AdSense revenue alone.

The Harkens were understandably reserved about explicitly detailing their finances, but did provide some clarity on what making a living from YouTube is like.

“Our income from AdSense is enough to make a living from, but it varies pretty widely month by month, depending on how many views our videos get,” Cole explains. “Although so far, even in our slowest months we’ve had enough to cover our living expenses.”

While the Harkens are currently focused on living in the moment, they are taking proactive steps toward future success. “We’re trying to build our personal brand as much as we can; we want to grow and develop bigger projects with the fishing industry,” says Cole.

In response to the variability of their monthly AdSense income, the Harkens are currently diversifying their revenue sources.

“We want to up our merchandise game, and we’re focusing on finding three or four points of income flowing in, beyond Google Adsense,” says Cole.

“Cole & Jay” are currently sponsored by a fishing and outdoor apparel supplier called 6th Sense Fishing. In 2020, the couple is preparing to sell their own merchandise and considering a Patreon account, where their fans can pay subscriptions to support “Cole & Jay” content. 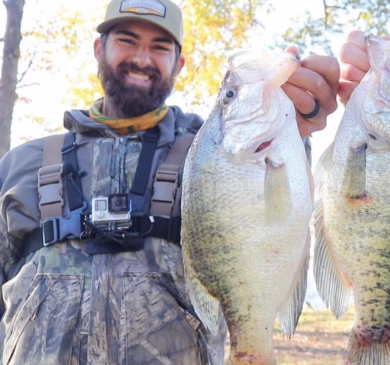 While “Cole & Jay” is currently one of only two or three significantly popular Arkansas YouTube channels that AY About You is aware of, and the only one with content centered around the Natural State, there is room for more Arkansans to carve out their own niche. The Harkens’ central piece of advice? “Don’t expect immediate, exponential growth. Just keep posting content, and if you’re lucky, one of those videos will hit the feeling of the moment. It’s about waiting for that viral moment,” says Cole.

“After that, be consistent with your uploads. We got lucky early on and had a video with 3 million views, so that gave us kind of an unusual jump,” Cole goes on to say.

“And have fun with it,” Jay adds. “You can’t go in feeling stressed out about this kind of thing.”

The Harkens also recommend that you shouldn’t go in expecting YouTube to be your sole source of income.

It’s extremely unlikely to experience any level of traction on YouTube; as of 2018, half of all videos uploaded to the website had 89 views or less. However, the Harkens’ ability to build their passion for sharing their outdoor adventures into a full-time career in such a short time is proof that with an interesting subject, charismatic presentation and a bit of luck, it is possible to achieve success online.