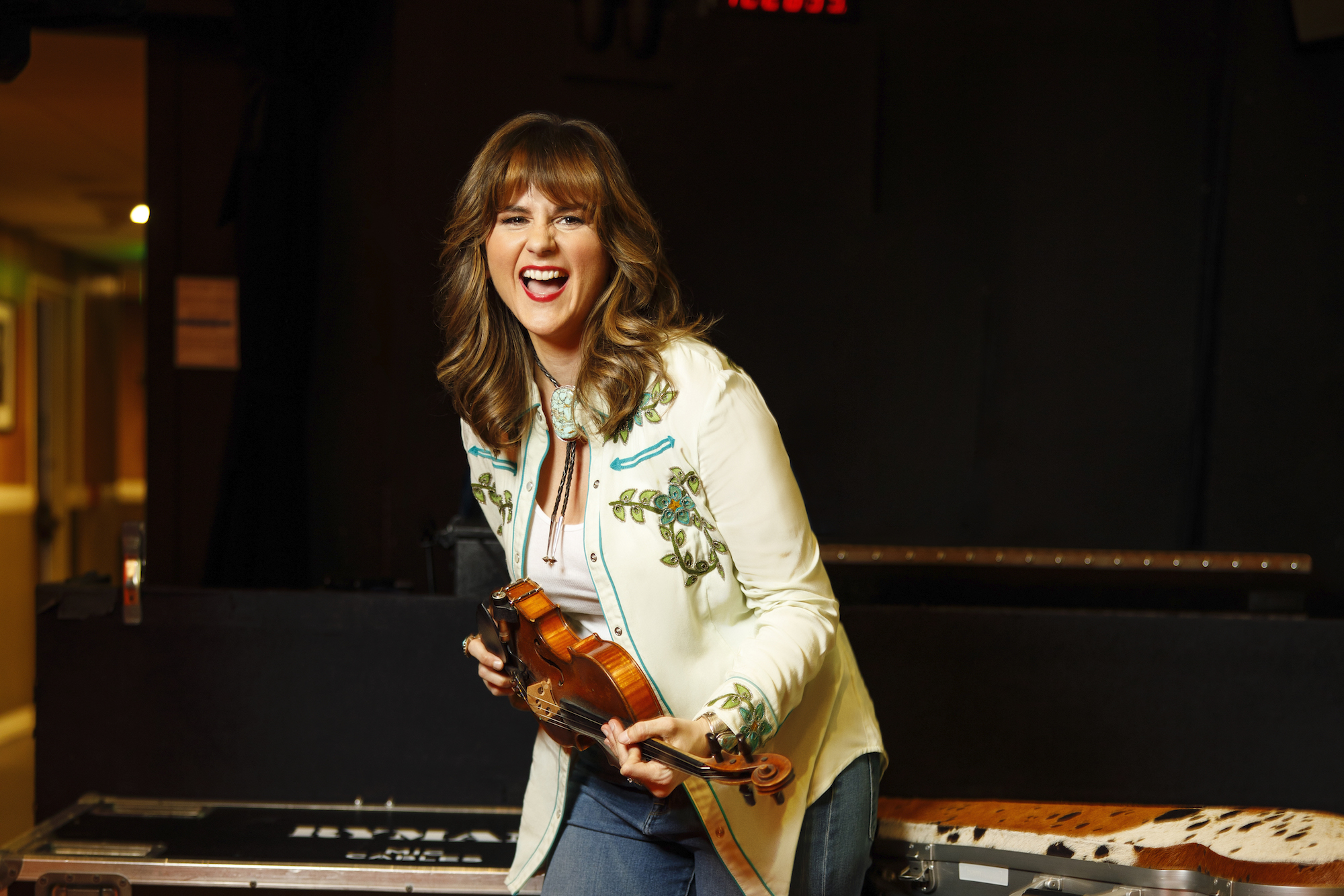 Although, it might be more appropriate to instead say she broke through a certain glass ceiling at the last CMA awards, becoming the first woman to win “Musician of the Year” at the awards program, which primarily goes to instrumental performers. “Musician of the Year is usually given to session players. There’s been a ton of great female players, but most of them aren’t on the session side of things, I think that’s a big reason why I’m the first woman to receive it,” says Fleenor. “I had a goal and I went for it, you know? The proof is in the picking.”

Fleenor does foresee the awards opening up to more women, though. “I certainly hope this has brought some attention to [female performers] and that will influence who gets hired for session work,” she says. “There’s some badass women players out there who should be included.”

Not only was Fleenor the first woman to win “Musician of the Year,” she was the first fiddle player to be nominated for the award in two decades. Fleenor believes this is part of a resurgence in traditional instrumentation in country music, which has fallen by the wayside over the past ten years. “When I first moved to Nashville, fiddle was pretty prominent on the radio. Only a few years later, I found myself touring with Martina McBride, and I found myself playing acoustic guitar, just because there wasn’t as much call for fiddling,” says Fleenor. “There’s always been an ebb and flow in country music. It’ll stray from its roots, but it always comes back, and I think that’s what we’re seeing today.”

Fleenor currently has two singles out, “Fiddle & Steel” and “Good Ol’ Girls,” which have garnered several hundred thousand listens. Both are autobiographical, following her beliefs about storytelling’s importance to country music. “I think some of the best songwriters come out of Nashville. The songs from here really pull at your heart strings, and the songwriters here can really relay that message,” says Fleenor. “Three chords and the truth is really what we live by. It wasn’t until I moved here that I learned that.”

Fleenor’s oeuvre spans from touring with Blake Shelton and Steven Tyler and playing in “The Voice” house band to session work and recording demos in her home studio. “Every day is different. Right now with the virus I’m strictly sticking with home recording, but last week I did tracking sessions with a full band, then I ran home to record some fiddle tracks for two french-language songs,” says Fleenor. “I also worked on background vocals and some mandolin recordings. Really, every day is different.”

Like most of us, Fleenor is basically homebound due to the COVID-19 outbreak. Thinking back to her childhood as a young fiddler, she had a few recommendations for parents stuck at home with juvenile musicians. “Try to make it fun for the kids, find ways to encourage them to practice, instead of it being a chore,” she says. “When I was a kid, my mom took the pieces out of a strawberry shortcake board game, so whenever I spun the dial, it landed on something I was supposed to practice. Kids’ attention spans are so short, you need to find ways to keep things fun and engaging.”

The pandemic has also caused Fleenor’s touring schedule to take a backseat, although she is looking at a few potential Arkansas performances. “They wanted me to come to Arkansas to do a concert, but Blake [Shelton] was in the middle of a big tour, which kind of rolled into when I’d be playing on “The Voice,” said Fleenor. “Still, I’d like to find a few dates this summer to play in Northwest Arkansas, if I can find time and if this virus gets figured out.”

Speaking of Blake Shelton, we were able to get a few comments from Fleenor on a fairly-recent controversy Shelton found himself embroiled in:

AY: You’re around Blake Shelton a lot. You perform in his road band, you’re in the house band for “The Voice” which he hosts, right?

AY: Okay. In 2017, People Magazine named Blake Shelton the ‘Sexiest Man Alive.’ In your professional opinion, did Blake Shelton deserve this award? Was he the sexiest living man in 2017?

Fleenor: (Laughs) He’s probably the sexiest man in Home Depot. It’s so funny, because these ladies come up to me and say “He’s so hot, how can you stand being around him?,” I see the Blake Shelton who comes to soundchecks in jeans and old cowboy boots. I think Blake won because his personality is lovable, he’s so funny and down-to-earth. That, and he cut off his mullet.

Fleenor’s newest single “Good Ol’ Girls” can be found on Spotify and Apple Music. An acoustic version can be found here on YouTube.