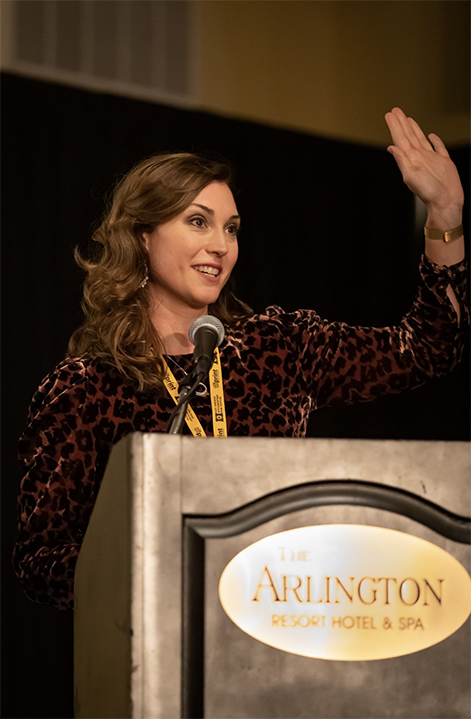 Jennifer Gerber had to go halfway across the country to realize something significant about her home state and its role in the artistic medium she loves.

“I wasn’t born in Arkansas, but I was raised here; grew up here in Hot Springs,” she says. “I left here after high school to attend film school in Chicago and started working in the industry.”

“Then I went to graduate school in New York, at Columbia University. I wrote a few scripts at Columbia about Arkansas and I realized while I was there that I was the only one from the South and the only one writing about a part of the country that’s not represented. So, I decided to make that my life goal, to tell stories about this community and be part of it.”

Gerber moved back to Hot Springs just as the Hot Springs Documentary Film Festival was rolling and knew she’d made the right move. Seeing the quality of films on display and the ready access to their creators moved her to sign up as a projectionist that first year. She steadily took on more responsibility until 2017 when she was named interim Executive Director, a title made permanent last year.

“I had a job at the time teaching at UCA full time and I loved that. I didn’t have plans to leave it,” she says. “But once I had completed my first festival here, I really saw the potential of this organization and the impact that we’re making in the state. I wanted to keep going and continue to build what we had established.”

In Gerber, the festival not only got a passionate leader but a well-credentialed one. She recently released her debut feature film The Revival with a theatrical run in Los Angeles and digital distribution on all the major outlets. She also worked with James Franco on The Sound and the Fury and Black Dog Red Dog starring Whoopi Goldberg and Olivia Wilde as first assistant director. She continues to write and is planning to dive into her next feature film next year. It’s a game plan that doesn’t unfold easily.

“It’s been a challenge, but I do what I do because it’s who I am. At my core, I’m a filmmaker and storyteller and I can’t stop myself from doing it,” she says. “But time management–wise, it has been really tricky. A part of the change that I hope to see in 2020 is that I’m carving out a little more room for some of my personal projects.”

Native filmmakers such as Gerber are enjoying heady times, professionally. The advancement of technology and online media outlets have made filmmaking more accessible than ever, freed from the rigid studio system of days gone by.

“The industry is in a really odd place right now, because they’re trying to monopolize the online platforms, where there’s so much content, but there’s still such a need for content,” she says. “It‘s kind of an odd problem. But it does create opportunities for filmmakers to really fit all by themselves on YouTube or on Vimeo or on their own Facebook pages. You can find your audience no matter what you have access to in terms of distribution, and you can build your audience.”

“It’s also an interesting thing because on your phone right now, you can make a pretty beautiful film. So, I think we’re seeing a little more levelling of the playing field when it comes to access to technology because you don’t need a fancy camera to tell a good story.”

“However,” Gerber adds, “it is still really difficult to tell a good story. There may be a lot more content being made, but it’s still hard to make a good film.”

Arkansas’ reputation – along with its crop of native directors and screenwriters – is growing in film circles. While still producing a fraction of what is found in other areas, the quality of work shot in Arkansas is generally very high. One reason for that, Gerber says, is the environment itself.

“The common thread that we see in a lot of the films is actually the beauty of Arkansas and the landscape,” she says. “I think what makes filming here really unique is the diversity of landscapes and places. There’s just so much amazing history and structures in this state and its presence in front of the lens.”

“But what I think is cool is it’s an artistic community where everyone has their own stories. There’s quite a range of the types of stories that we’re seeing and the way they’re treating them and that’s a good thing. We don’t want them all to be the same. I think that’s really exciting.”