Joe Jones And A Place Of Civic Reflection 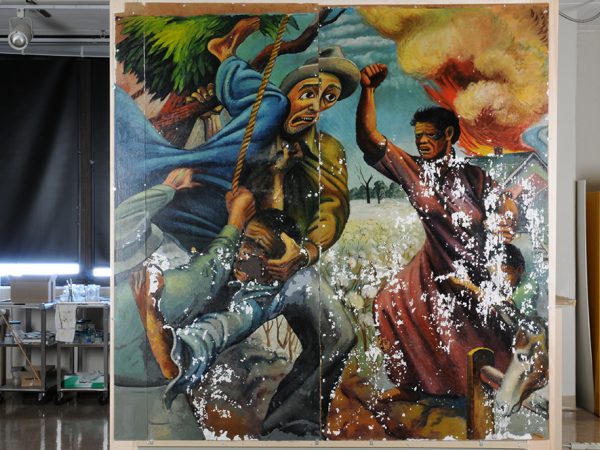 The damage of this panel, originally painted on the cafeteria wall at the defunct Commonwealth College in Mena, is minor compared to others of the 29 found in an abandoned home in Fort Smith. The painstaking restoration by Helen Houp Fine Art Conservation in Dallas has restored the mural to its near original brilliance.

[dropcap]M[/dropcap]ena, a town of a little more than 5,000 residents, located in Polk County is known for its captivating scenery. Queen Wilhelmina State Park. The Little Missouri Falls. The Ouachita National Forest.

Now, add to that list another little-known visual attraction from the area. Although its aesthetic is not of nature as are the falls or the forest, it is captivating, nonetheless.  It is a mural by artist Joe Jones entitled “The Struggle of the South,” painted in in 1935 at the now defunct Commonwealth College. The mural features scenes of early 20th Century rural Southern life in Arkansas including, farming, coal mining in northwest Arkansas … and lynching.

Commonwealth College was founded in 1923 to train students in socioeconomic reform and the burgeoning labor movement. The school was small and unconventional as institutes of higher learning go. According to the online Encyclopedia of Arkansas, the school operated on a “vague” quarter system during which students were allowed to take no more than three courses. According to the Encyclopedia of Arkansas, one of the college’s best-known students was Governor Orval Faubus.

The college closed in 1940 and the mural was removed from the campus. The mural was discovered decades later in a closet in a house near Fort Smith when it was obtained by UALR.

According to Brad Cushman, Gallery Director and Curator of Exhibitions at the UALR Art Department, the Arkansas Natural and Cultural Resources Council has awarded the UALR Gallery Program $536,000 to be used for the conservation of the mural. The university acquired the mural in 29 fragments in 1984, and began the process of restoring the mural in 2010. The mural is currently in storage awaiting a permanent display space.

Jones, according to Cushman used his art as activism, shown by a statement in 1933: “I’m not interested in painting pretty pictures to match pink and blue walls. I want to paint things that knock holes in walls.” His passion for self-expression becomes a means for addressing social injustice. He began as a house painter and later began as a self-taught artist moving from house walls to easels.  Soon Jones begins to teach free art classes to unemployed white and black laborers.  Eventually, he is locked out of his studio classroom for teaching more politics than art.  Ironically, his art studio was located in the St. Louis courthouse building where slaves had once been auctioned and the Dred Scott decision was made.

Joe Jones was invited to be a guest instructor at the Commonwealth College in Mena in August of 1935.  Upon arrival, Jones travels throughout Arkansas for three days to get a sense of the social and cultural climate of the state.  This tour would influence the artist and the imagery he would compose for the mural. Jone’s “Struggle of the South” is one example of Jones’ depiction of social inequities.

He works on the mural, for the dining room walls, at the Commonwealth College for three weeks.

Later, Joe Jones is commissioned to paint a mural for the Magnolia, Arkansas post office in July of 1938. His initial design depicting an African American family in Magnolia was rejected. He was instructed to paint a wheat farmer, in spite of no wheat grown in Arkansas.

Since that time, and with new public interests in Jones’ works, three grants awarded to the UALR Gallery Program have made possible some restorative work on the murals, including cleaning, recreating missing sections, crating and storage of the panels and more. “The conservation was completed a year ago,” Cushman said. “The panels have been conserved and are in climate controlled protection in Dallas.” 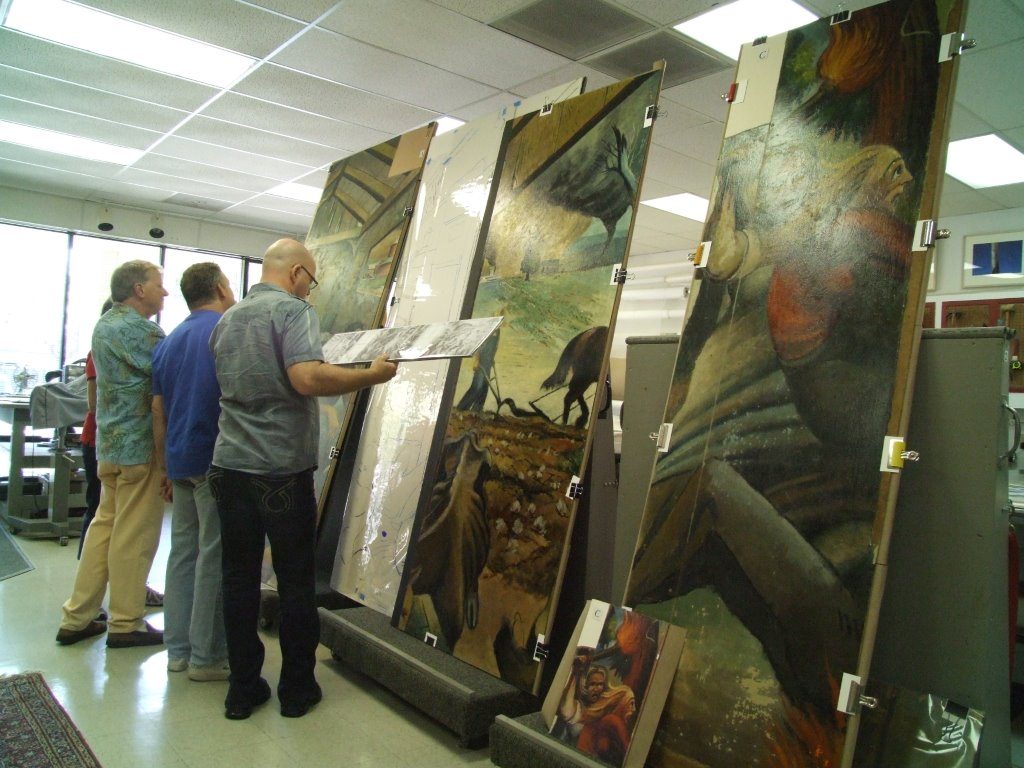 Eventually, the panels will be shared with the viewing public. But Cushman has envisioned a plan for the panels that goes far beyond simply being hung in a gallery.

“There is such a challenging story presented in the mural, because you’re dealing with poverty, income inequality and man’s inhumanity to man because of the lynching segments,” Cushman said. “And then, there were the striking coal miners that were also dealing with labor issues like the tenant farmers. To me, it wasn’t a mural you could just put up in a public space or on a campus. It needed a context. It needed to have a place where people could ponder the imagery,” he added.

Cushman said that it’s important for visitors to become intrigued with the idea of viewing the panels from the moment they arrive at the gallery that would be in the university’s Institute on Race and Ethnicity Center. “My thought is, what would hook a current audience when they come into this space? Why should I be interested in a mural painted in 1935?,” he pondered.

The space housing the panels should be interactive, Cushman insists. “Our idea is to have a digital mural at the beginning of the exhibit space dealing with contemporary issues. It could be labor; it could be a Black Lives Matter issue.” Cushman said that these and other contemporary issues such as the recent protests about the pipeline re-routing issue in North Dakota, or the recent shootings at the African Methodist Episcopal church in Charleston, South Carolina are the kinds of issues that could be represented in discussions at the gallery. “This would be ongoing and changing,” Cushman said, “so when people walk into this space they would interact with the panels and create their own digital mural.”

Cushman hopes that the panels exhibit and the gallery will become “a place of civic reflection.”

“I’m hoping that this will become a space where students and faculty will gather when something happens that really shakes us up. It could be a place where we all gather together in a safe place and ask questions and talk about it,” he said.

Cushman’s desire it to keep the mural relevant. “When things happen today in our community now, we often times learn about it through social media. The various digital area of the exhibit can be updated as current situations arise adding and expanding discussion.  Large digital rustic tables as you exit the mural will continue to create dialogue as students and parents are on campus in informative ways.”

The cost for this vision will cost around $3 million dollars. Works are in process to raise the funds. “This is a group effort across university departments,” explained Cushman. “I don’t know if it will take two years, five years, but it’s important for this to become reality. This can have an important impact for the university and the community.”

A documentary film representing the complete restoration process is being produced with funding from the National Endowment of the Humanities, Chairman’s Emergency fund. Cushman, along with Cheryl Hellmann, Director of UALR University Television, principals in the film’s production.

To see more images of the restoration, go to aymag.com/arts-culture.