Professional and amateur cycling teams head to Fayetteville March 30 through April 2 for the annual Joe Martin Stage Race. Celebrating 40 years, this four-day, four-stage race will host 750 athletes from 27 countries and all 50 states.

Today, the race is a draw for top domestic and international cyclists, but it had humble beginnings. Joe Martin helped start it back in 1978 as a local event called the Fayetteville Spring Classic Bicycle Race. He was known for being all things cycling: operating a bicycle shop out of his garage and starting a bike team. After Martin’s death in 1988, the event was renamed the Joe Martin Stage Race. It is one of the longest, continually held races in the country. 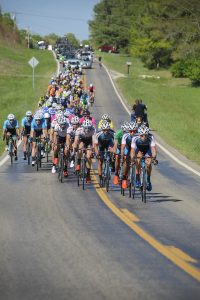 “I think we are the biggest event in Northwest Arkansas that people don’t know about it,” Bruce Dunn, race promotor, says. “We’re one of 25 of these events in the country and Fayetteville, Arkansas, has one. Less than 10 of them are internationally sanctioned and only four are national and internationally multi-stage races.”

The Tour de France is the most famous example of a stage race, in which the cumulative time at the end of the stages determines the winner. Stage races can last anywhere from three to 25 days.

Dunn says that the average cyclist’s training adds up to about 16,000 miles on their bike per year: more miles than some people drive their cars. The athleticism of cyclists, how close quarters they are on the course, the colors of their jerseys, and the sounds of bicycles whizzing by all play to the enjoyment of watching the race.

“Bike racing can’t really be truly appreciated unless you see it in person,” says Dunn. “It’s one of the most beautiful sports.” 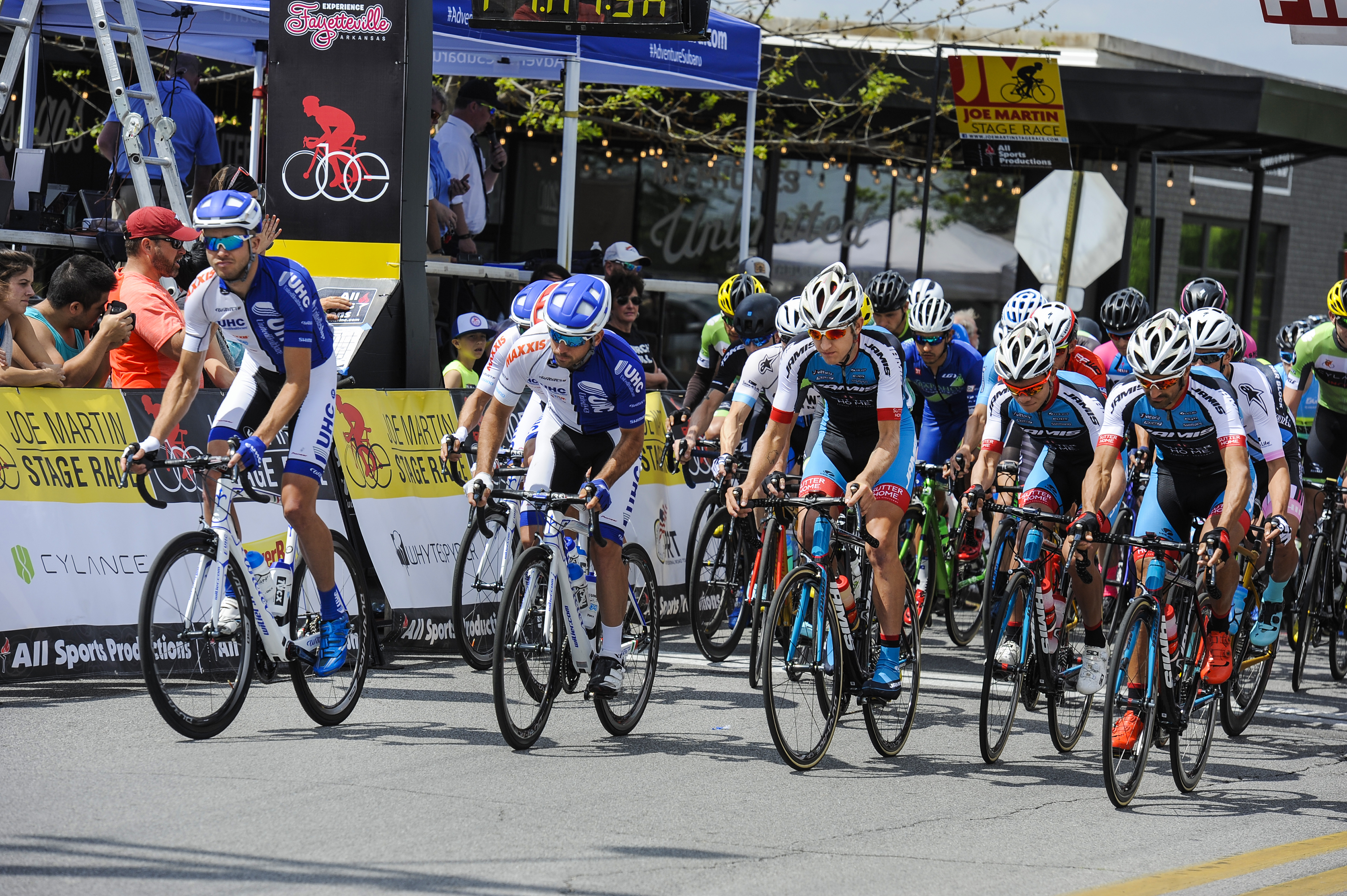 JMSR’s four-day, four-stage race offers thousands of dollars in cash and merchandise. The races will begin at noon on Thursday, March 30, with a Pro Men, Pro Women, and an Elite Men category uphill time trials that will push even the most seasoned athletes. In time trails, riders race against the clock.

Friday, the Pro Men’s road race begins at 11:30 a.m. for a distance of 110 miles. The Pro Women will start their 64-mile race at 12:15 p.m. Both races will finish beginning at approximately 2:45 p.m. in the downtown retail and entertainment district of Fayetteville.

Saturday’s action begins at 7:30 a.m. with the amateur racers contesting the Devil’s Den Time Trial at Devil’s Den State Park in nearby West Fork. The Saturday afternoon road race is the third day and third stage for the Pro Men and Women’s fields, as well as the second stage for the amateurs.

A distinctive feature of the event is the Joe Martin Gran Fondo, which lets people sign up to experience the pro routes. Held Saturday, April 1, it consists of three courses – both the 114-mile and 45-mile courses are the same as the Pro Men and Women and the 30-mile course is held on a portion of the pro’s Saturday route.

“A lot of these tour rides don’t have that,” Dunn says. “To participate on the same course as the pros do is unique.” 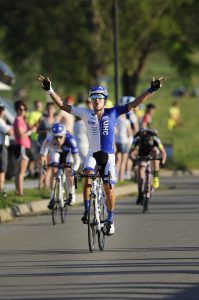 The final event of the Joe Martin Stage Race is Sunday. The criterium races, which are the most spectator friendly, start at 8 a.m. The Pro Women’s race starts at 2:30 p.m. and the Pro Men’s race at 3:30 p.m. A criterium is a multi-lap, one-day race around a relatively short course that is typically less than one mile. Criteriums often take place in urban areas with sharp turns. Fierce, competitive sprints are common.

The JMSR criterium start/finish line and vendor expo will be at the intersection of Center Street and Church Avenue in downtown Fayetteville. The racing action is fast and furious with riders going at speeds over 35 miles per hour around 90-degree turns with handlebars and shoulders touching.

Also on Sunday at 2 p.m. around the downtown Fayetteville square, there will be a special event for kids ages 3-12, including a free ride and inflatables. This day has a festival atmosphere.

Sunday in particular is a good time to meet the athletes. “It’s not like you have to have a backstage pass or special access,” says Dunn. “They are right there.” The sport of professional cycling is a much more approachable sport, Dunn adds.

Dunn says that JMSR will continue to be a premier event as long as the city, community, sponsors, and volunteers are willing. He adds that there are only a few professional bike races in the country because the cost to produce one is high. He is currently looking for a new sustainable source and sponsor for JMSR. 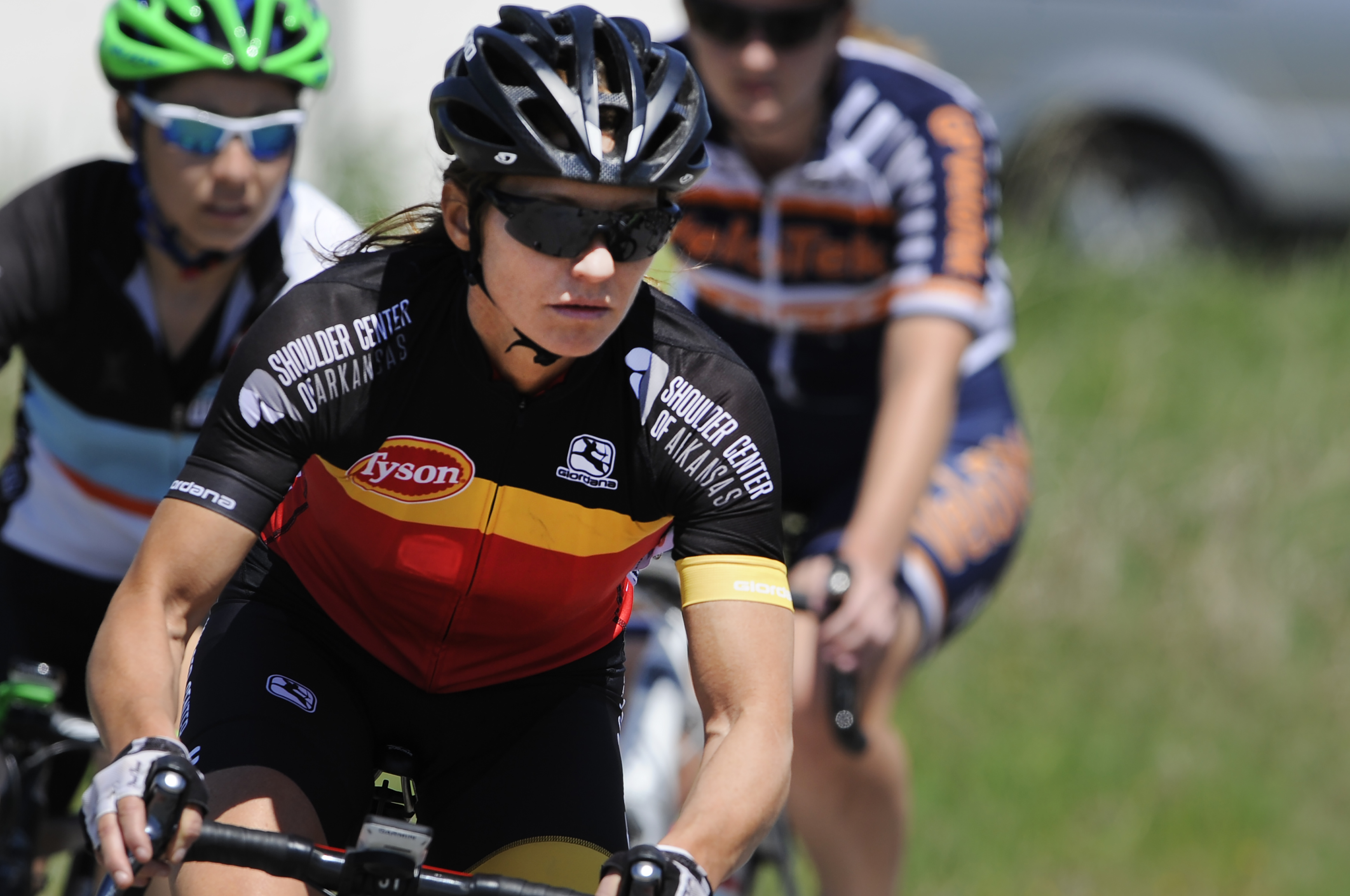 The goal is to expand on the success of the JMSR to start a state-wide Tour of Arkansas that will be internationally televised in the next three to five years.

“It’s the bigger picture in addition to the fact that we love the sport, health and wellness factor, and it’s great for the community,” he explains.

Dunn likes the fact that JMSR has been a contributor to the awareness of the city’s trail system and has helped with the impetus to carry forward the cycling initiatives.

He adds that when families come to watch the JMSR they typically want to visit area bike shops and start cycling. “I hear that every year,” he says. “People say ‘maybe we should rediscover cycling as a family.’ I’m most proud of that.” Dunn says he also sees people who attend the race from outside the state return for vacations because they love the area.

Dunn is the race promoter and owner of All Sports Productions, a sports event management and consulting company promoting cycling, running, duathlons, triathlons, adventure runs and other outdoor events. See all of the events at www.allsportsproductionsinc.com.