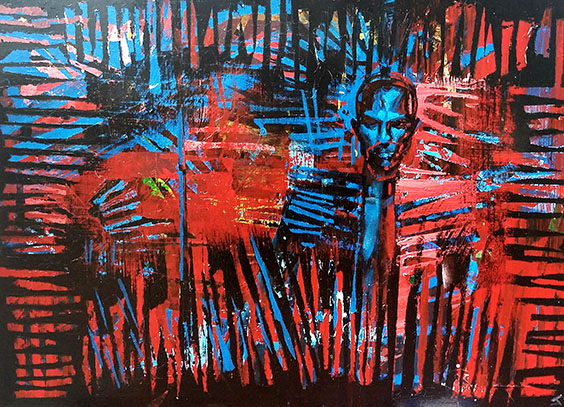 The next installment of the Art Department, a quarterly exhibition series hosted by Thea Foundation, will feature the work of Joëlle Storet in an exhibition titled “Awakening.”
The exhibition will be up February 1 through March 2 in the Thea Foundation gallery, and a reception will be held Friday, February 1, 2019, from 6:30 to 9:00 p.m. at Thea Foundation. Admission is $15 at the door, which covers heavy hors d’oeuvres by Heritage Catering, an open beer and wine bar, and the chance to win a workby Storet.
“This particular body of work was heavily inspired by my bi-cultural upbringing,” says Storet. “I was born and raised in Europe until I was 12 and am fluent in several languages since age 7. Despite being half-African from my mother’s side, I spent very little time in Zaire. The culturally-ingrained experiences I had amassed over time were constructed by my mother’s presence through language, comic books and film. Belgium, being one of the former colonial powers, has one of the largest collections of authentic Central African art in the world at the Royal Museum of Tervuren. I was never able to see in such detail again either in Europe or America.”
Joëlle Storet was born in Brussels, Belgium and lives in Fayetteville. She is an accomplished emerging artist and is also the current Gallery Manager of Art Ventures NWA (formerly known as the Fayetteville Underground). She has exhibited several works in Fayetteville, Bentonville, Vienna and Berlin. She is a graduate of the University of Arkansas with a background in Cultural Anthropology, Semiotics and Linguistics.
Personal “rebirths” of oneself occur for many reasons for all people. In the case of the artwork of Joëlle Storet, the most recent renaissance is the most personal. For the longest time, the Belgian-born Congolese artist was creating inspired pieces that were incredibly popular in the town that nurtured her creativity the most, Fayetteville, as well as around the world. Now she is diving deep into a part of herself that she used to feel a little shy exposing. Her art as well as her upbringing can be described virtually in the same fashion. It is a deep Afro-Teutonic Synthesis.
Storet’s exhibition will be on display at Thea Foundation February 1 through March 2, 2019.
Thea Foundation is located at 401 Main Street in North Little Rock. Gallery hours are M – F, 9 a.m. – 12 p.m., 1 – 5 p.m. For more information, visit theasartdepartment.com, call 501-379-9512 or email stacey@theafoundation.org.
READ MORE: Arkansas Artists You Need to Know
Image is a painting by Joëlle Storet entitled “Hostile”