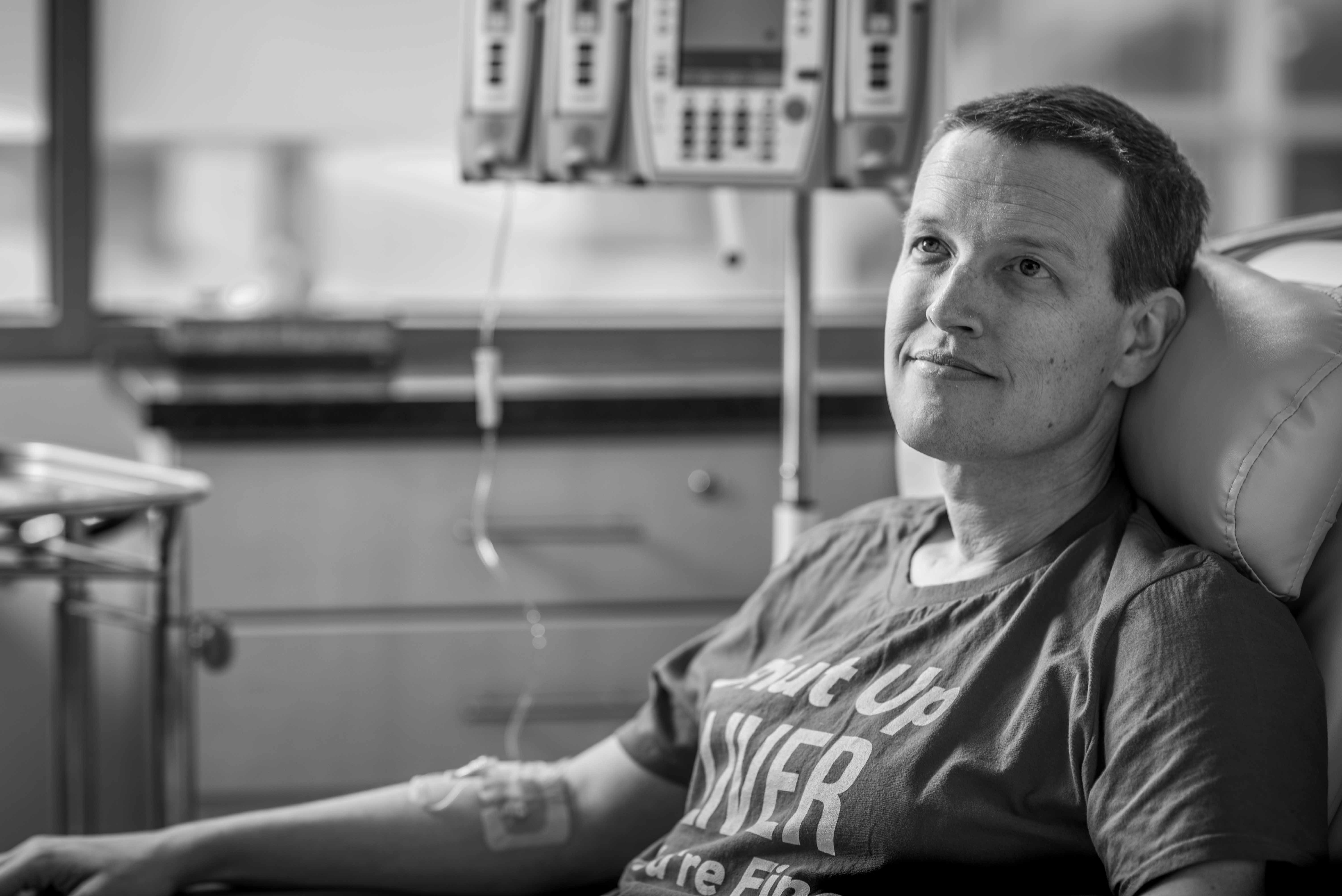 By Dwain Hebda | Photography by Jamison Mosley
It’s a full house for the Wednesday improv night at The Joint in North Little Rock, and Halloween to boot. Spider-Man perches on a barstool along one wall, the twins from The Shining stare goosebumps onto everyone in their path and a dead-on Wonder Woman tugs her patriotic bustier into the upright and locked position. Hard rain pounds the wall of windows off stage right. The streets shine like Mylar.
Matt DeCample sees all and none of this, standing in the hazy spotlight on the tiny stage. He’s dressed in a pair of ridiculous pajamas with a skeleton’s frame printed on the front which, with his baby face and short-cropped hair, makes him look like an overgrown fourth-grader giggling through fart jokes at a sleepover. He’s feeling good tonight, and it shows.
“I had to wear a costume, and I needed something that’s comfortable,” he says. “I found this set of pajamas that are a skeleton, so I got those. I’m just going to go and be like, ‘Yeah I’ve had a lot of CT scans and X-rays and this is what happens.’” He chuckles. 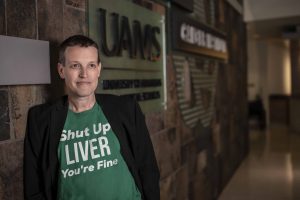 Two days ago, he was playing to a different crowd – the nurses at the Winthrop P. Rockefeller Cancer Institute at UAMS in Little Rock – while taking chemotherapy. It was his 41st treatment, a nearly three-hour routine set to a chemical metronome dripping in time over his right shoulder. He even has his own sidekick, a driving pal he nicknames Cancer Wingman, who plays Martin to his Lewis, Teller to his Penn.
“Humor is how I cope,” DeCample says. “I’m going to make jokes. It comes in handy.”
Seattle-born Matt DeCample landed in Arkansas 19 years ago as an ambitious young TV reporter looking to use Little Rock as a stepping stone to bigger things. But he was so good on the political beat, it led to a job with then-Arkansas Attorney General Mike Beebe, and from there, he followed his boss into the governor’s office.
Eighteen months after the Beebe administration ended, DeCample had some tests to pinpoint why he was feeling loopy after workouts and why, despite hitting the gym, he continued to gain weight rapidly.
“My GI doc called me two days later and said, ‘You’ve got to sit down,’” he says. “At the time she was like, ‘there’s something in your liver, there could be something in your abdomen, in your pancreas. We can’t tell for sure. We need to get you in.’
“I got my appointment, and they came in, and it was all very serious voices and faces, and they’re like, ‘You have Stage IV cancer, and it’s very aggressive.’ They would not give me a prognosis, which I respect because I knew a great cancer doctor who always said if someone gives you an exact timeframe for your life expectancy, you need to get a second opinion.”
His choice to be treated at the Rockefeller Cancer Center was like going to a doctor in the family. Gov. Beebe helped secure the $50 million to build the place, and as his staffer, DeCample spent a lot of time here during various phases of construction. He remembers when the sparkling waiting rooms, soaring glass façade and soothing treatment areas were just bare girders. Through his surreal return here as a patient, turnabout has been fair play: The institute’s doctors, specialists and nurses now know him from the guts out, too.

“I did not do the research,” he says. “A lot of my friends did, and I think my family did and looked at numbers and the odds. It was pretty grim. So my doctors were like, we’re going to throw everything we have at it.”
DeCample’s type of cancer produced tumors that were leaking fluid into his abdomen, which accounted for the weight gain. His disease, intrahepatic cholangiocarcinoma, is exceedingly rare in someone as young as he. At one point, his oncologist attempted to contact physicians treating similar cases and could only find five nationwide. But if there was any positive takeaway to be had at all, it was that he was young enough to withstand the aggressive treatment protocol his doctors recommended.
“Under this current line of chemo, I come in once every two weeks,” he says. “Then I get about two and a half hours of treatment here, and they give me this little ball. I call it my chemo grenade. It’s full of the hardcore stuff, and I take it home. It’s on a slow drip over about 48 hours. It’s old school tech.
“So I do that for 48 hours and then come back, and they unplug me. I have to come back the next day and get a shot to stimulate my marrow to produce more white blood cells. I get about a week and a half to recover and then back again.”
The concept of chemotherapy seemingly defies logic, as it involves the ingestion of cytotoxic substances specifically designed to kill cells, albeit cancerous ones. And while newer medicines act more like stealth ninjas than the pharmacological carpet bombing of the past, there’s still collateral damage and vicious side effects for the average patient.
Given what he’s got, DeCample is not average, not by a long shot, just for still being here. When he cycled off his first round of chemo in February 2017 – mandatory to avoid the medicine causing permanent damage to certain body systems – his oncologist gave him a breather. That August, it was determined he needed more, so he showed up at the infusion lab. The staff’s reaction was somewhere between seeing a ghost and a dead man walking – they’d all assumed his absence was permanent.
He’s still something of a unicorn as he curls into one of a row of leather recliners at Infusion 1 Lab, fielding well-earned heckles from the nursing staff and dutifully swallowing pills to tamp down nausea.
“Right now, we’re just plowing away at it because this particular type of cancer never completely goes away…yet,” he says. “They’re working on it. You just try to beat it back into remission for as long as you can and get as many years out of it as you can. That’s where we are right now.”
DeCample doesn’t confess any major epiphanies on this road. Raised in a strict Catholic tradition from which he’s since drifted, he hasn’t had any cancer-inspired conversions. People offer him prayers all the time, which he accepts graciously and leaves it at that. He’s also not gone on a bucket-list adventure binge or felt any sense of reckless abandon knowing his life will likely be shorter than he expected. Except for online shopping.
“It has definitely hindered my impulse control when it comes to purchases,” he says, guffawing. “Before, when I’d be on Amazon, I’d be like, ‘Should I get that later?’ Now I’m like, ‘Order it!’” 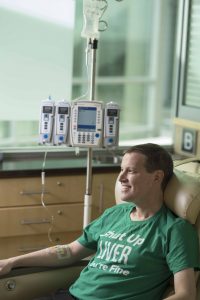 Mostly, Matt DeCample defuses the fear and horror of cancer through the simple act of being as present and cognizant as he can be in the warmth and friendship to which he is privy. His circle of friends is wide and deep, and he draws from them what chemo and his own wrecked immune system cannot produce. And that, he says, is what he’d like more people to understand when faced with a loved one battling the disease.
“If you have someone who is going through this, the best moments for them are going to be the moments that you can have that make them feel normal,” he says. “Go to the lake like you used to, take a day and take them shopping or go out hiking, as much as they’re able. Hell, take ‘em to Vegas, whatever it is.
“Whatever you can do to break them out of that setting, for me personally and for other patients I’ve been talking to, that really helps.”
As the comedy club audience files out into the still, damp night, DeCample reclines in a chair near the door of the theatre and catches his breath. He doesn’t look worse for wear, but then you can’t see the medicine port implanted high on the right side of his chest either, and that doesn’t mean it’s not there.
As always, tonight’s laughter was therapeutic, if not curative, and at this moment, that’s good enough. It’s another day completed, after all, another turn in the complicated relationship he lives with his condition; not free of it, but not defined by it either. Tomorrow may be a bitch, but at this moment, he smiles.
“Glad you made it,” he tells a patron. “See you next time.”