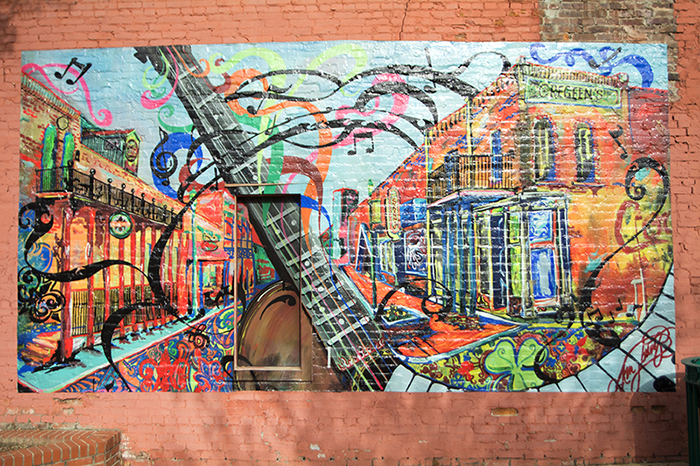 By Joe David Rice | Photos by Jamison Mosley & Camille Brewington Tippitt
As AY’s travel editor, I’m charged with producing pieces that are objective – or something close to it. But that’s not going to happen with an article on Jonesboro.
This fine Craighead County community, you see, is my hometown, the place where I spent my formative years. It was in Jonesboro where I learned to swim at the local YMCA, played Little League baseball, attended vacation Bible school, got my initial library card, suffered through an early boyhood crush (where are you, Penny M.?) and received my first bicycle. In fact, decades ago, using a motley assortment of shovels, picks and hatchets, my neighborhood friends and I constructed what had to be among Arkansas’ earliest mountain bike trails in an overgrown thicket a block from our home on Wilkins Street. Back in those days, we rode bicycles to school, were totally unfamiliar with the concept of a bike lock and would have been laughed off the street if seen wearing a helmet.
The Rice family enjoyed picnics at Craighead Forest Park on the edge of town and spent the occasional summer afternoon swimming at nearby Walcott, a place I later learned was officially known as Crowley’s Ridge State Park. My sisters and I hosted a series of cats over the years and even had an affectionate pet duck named Quacker. A big sports fan even as a boy, I fondly remember going to the Arkansas State College campus and watching the Indians play (this was before the school became Arkansas State University (ASU) and prior to the team’s transformation into the Red Wolves). In short, my childhood was pretty darn close to living out a Norman Rockwell experience — despite the rare tornado.
RELATED: Getting to Know Jonesboro
As for crime, I can only recall a single incident. My father “stole” my mother’s 1955 Plymouth Belvedere from the driveway one evening, parking it around the corner in an unsuccessful attempt to break her of the habit of leaving keys in the ignition. A vigilant neighbor lady watched the action through her kitchen window and quietly alerted my mom to the deed.
Although my children are reluctant to admit it, Jonesboro’s history actually predates mine. The area was first settled about 200 years ago by Benjamin Crowley, for whom Crowley’s Ridge is named. The town itself — originally known as Jonesborough in honor of Senator William A. Jones — was established on February 19, 1859, although it wasn’t legally incorporated for another quarter of a century or so.
Like most Arkansas communities, Jonesboro has faced its share of challenges over the years: a Civil War skirmish, malaria epidemic, an all-consuming fire in the central business district, a tragic headline-grabbing school shooting and, of course, several serious tornado assaults. Despite these infrequent setbacks, the city has pushed ahead and is now the driving force of Northeast Arkansas. The quiet town of about 20,000 residents during my boyhood days is now a thriving commercial center with a population nearing 70,000. 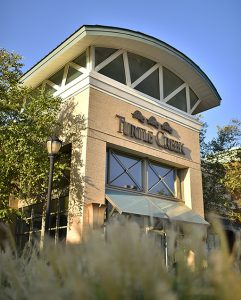 The Mall at Turtle Creek is one of the state’s largest retail complexes.

While much of the city appears unchanged — such as the historic homes lining Washington Avenue and the towering grain elevators of Riceland Foods — there’s no shortage of evidence that Jonesboro is firmly ensconced in the 21st century. A good example is The Mall at Turtle Creek. Opening a dozen years ago at the corner of Highland Drive and Red Wolf Boulevard, this retail complex is among the largest in Arkansas and features over 100 stores and restaurants. Likewise, the downtown district continues to evolve. There are still plenty of shops as in the days of my youth, but the mix now includes loft apartments above a fine assortment of trendy restaurants with mouth-watering specialties: seafood, steaks, Cajun/Creole, burgers and pub food.
One of the biggest investments along the Main Street corridor can be found inside the two Gearhead Outfitters shops, in business now for better than 20 years. “Northeast Arkansas’ biking and cycling community is strong and growing,” says store manager Seth Freeman. “People here are living healthy, creative lifestyles.” The Gearhead team has partnered with St. Bernards Healthcare to provide a “fitness series” with family-oriented activities scheduled nearly every month of the year. Should you find time to visit Gearhead, make sure to get introduced to Murphy, the store’s goldendoodle. 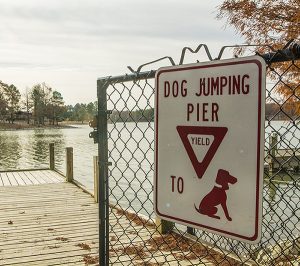 With 20 parks, the outdoor experience is a big part of Jonesboro’s character.

The outdoor experience is a big part of Jonesboro’s character. That’s really no surprise given the city’s 20 parks, highlighted by the 700-acre Craighead Forest recreational paradise on the city’s south side. This park alone contains a picturesque lake for boating and fishing, campsites, ballfields, a disc golf course and a network of walking and biking trails. The new “pump track” has proven so popular with mountain bikers that a second one is in the planning stages. Danny Kapales, director of the city’s Parks & Recreation Department, is especially proud that 10,000 kids are enrolled in the soccer, baseball, softball, basketball, golf, tennis and football programs. He and his colleagues even offer classes on cheerleading and rock climbing. And according to Kapales, the best is yet to come. The city is in the midst of planning “Red Wolf Way” — an ambitious 25 to 30-mile bicycle and pedestrian beltway that will encircle the city with spurs connecting to downtown, Craighead Forest, Turtle Creek and the ASU campus.
Adjacent to Craighead Forest is the Forrest L. Wood Crowley’s Ridge Nature Center. Sitting on a 160-acre site, it includes woodlands, a pond and prairie along with trails and an observation tower. Among highlights within the impressive visitors’ center are a 16-minute film and a two-story diorama, both introducing guests to the flora and fauna of Crowley’s Ridge. Admission is free; the facility’s closed on Mondays and major holidays.
Newcomers to Jonesboro are often surprised by the community’s cultural offerings. The Foundation of Arts operates the 650-seat Forum Theatre in the heart of downtown and oversees its busy performance schedule: a summer musical, children’s plays, adult comedies/dramas and holiday specials. “The Hunchback of Notre Dame” will be playing in late October, followed by the “Nutcracker Ballet,” “A Christmas Story,” “The Jungle Book,” “Beauty and the Beast,” “Coppélia” and “Mamma Mia.” 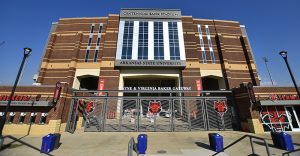 Centennial Bank Stadium on the campus of Arkansas State University will undergo an expansion.

A slew of additional cultural opportunities can be found on the ASU campus. The Fowler Center is a hotbed for visual and performing artists while the Bradbury Art Museum presents changing exhibitions of contemporary works produced by major regional, national and international artists. Meanwhile, the ASU Museum includes displays on the Arkansas frontier, the New Madrid earthquakes, Native Americans and – especially popular with kids – a Crowley’s Ridge mastodon.
It’s hard to over-estimate the positive impact of Arkansas State University on the Jonesboro metropolitan area. For one thing, the 14,000+ students bring a lot of youthful energy and vitality to the community, not to mention tens of millions of dollars in expenditures. Not to be overlooked is the fact that the 1,627 faculty and staff members are vital contributors to the city’s fabric. Dr. Charles Welch, now serving in his eighth year as president of the ASU system, feels that remaining true to its core mission — serving the Delta by emphasizing agriculture, education and health care — has fueled the school’s steady growth. Partnerships have been particularly effective, Welch says, citing the $29 million expansion of Centennial Bank Stadium and the $60 million convention center/hotel project that will open next summer near the stadium and Convocation Center. He also noted the cooperative arrangement between ASU and the New York Institute of Technology College of Osteopathic Medicine. Entering its third year, the program now boasts over 300 medical students on the university’s Jonesboro campus, many of whom will establish practices in under-served areas of rural Arkansas.
When I asked Jonesboro Chamber of Commerce President Mark Young to explain his city’s growth and prosperity, he quickly noted the dedication and sense of local pride. “People here care about what matters,” he says. “The cooperative spirt of Jonesboro’s business community is exceptional.” Pressed to elaborate, Young referred to comments made by an Alberto-Culver vice president based in Chicago who was in charge of choosing a location for a major industrial investment several years ago. Like other cities on the list of finalists, Jonesboro met the basic criteria. But the deciding factor in Jonesboro’s favor, according to this high-powered industrialist, was a hard-to-define intangible quality. “There’s just something special,” he said, “about Jonesboro.”
I couldn’t agree more — and hope you’ll spend some time in this friendly and progressive community.
RELATED: Learn more about Batesville!