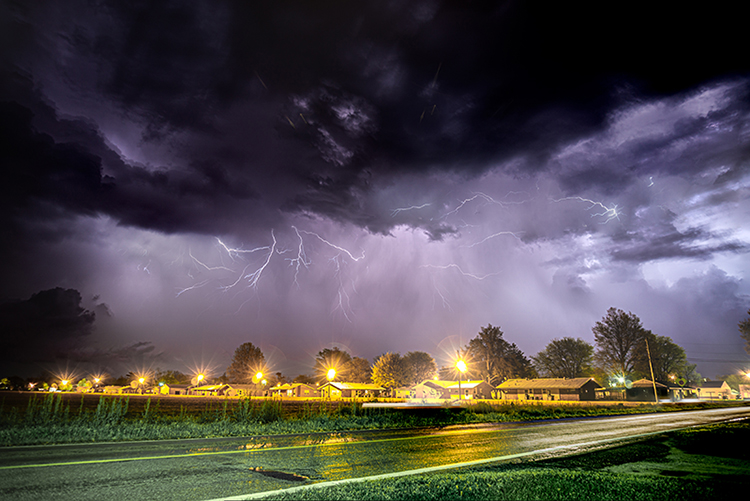 Toni Holmes noticed the train stopped at the Prospect Road railroad crossing near her home in eastern Jonesboro on March 28 and thought it was strange. Trains usually pass through quickly so as not to hinder traffic on the busy road, but this southbound freight had been idling quietly at the crossing for some time.

She stepped outside onto her driveway to see the train better when her cellphone began buzzing at 4:45 p.m., issuing a tornado warning for Craighead County. A tornado had formed in the western edge of the county, blowing through remote farmland before dissipating, but the system that spawned that twister was headed toward Jonesboro. The alarm, Holmes figured, was more a precaution than an actual warning. She didn’t have cable television and couldn’t see the live pictures on Jonesboro’s ABC affiliate, KAIT, of the large wedge-shaped tornado plowing through the heart of Jonesboro. It began raining, and she went back inside her home to shut the windows.

Holmes thought she heard the train’s diesel engines revving loudly in preparation to move. She looked at the nearby tracks and saw the train was still idling at the crossing. That’s when the roaring EF-3 twister packing winds of up to 165 mph bore down on her neighborhood. “I saw debris flying,” she says. “I ran back inside and started praying.”

Two weeks earlier, Jonesboro, like the rest of the country, began dealing with the novel coronavirus. Businesses closed and people, for the most part, stayed indoors in self-quarantine to curtail the spread of the disease. But despite the relatively low number of cases in Craighead County, the virus was taking its toll. 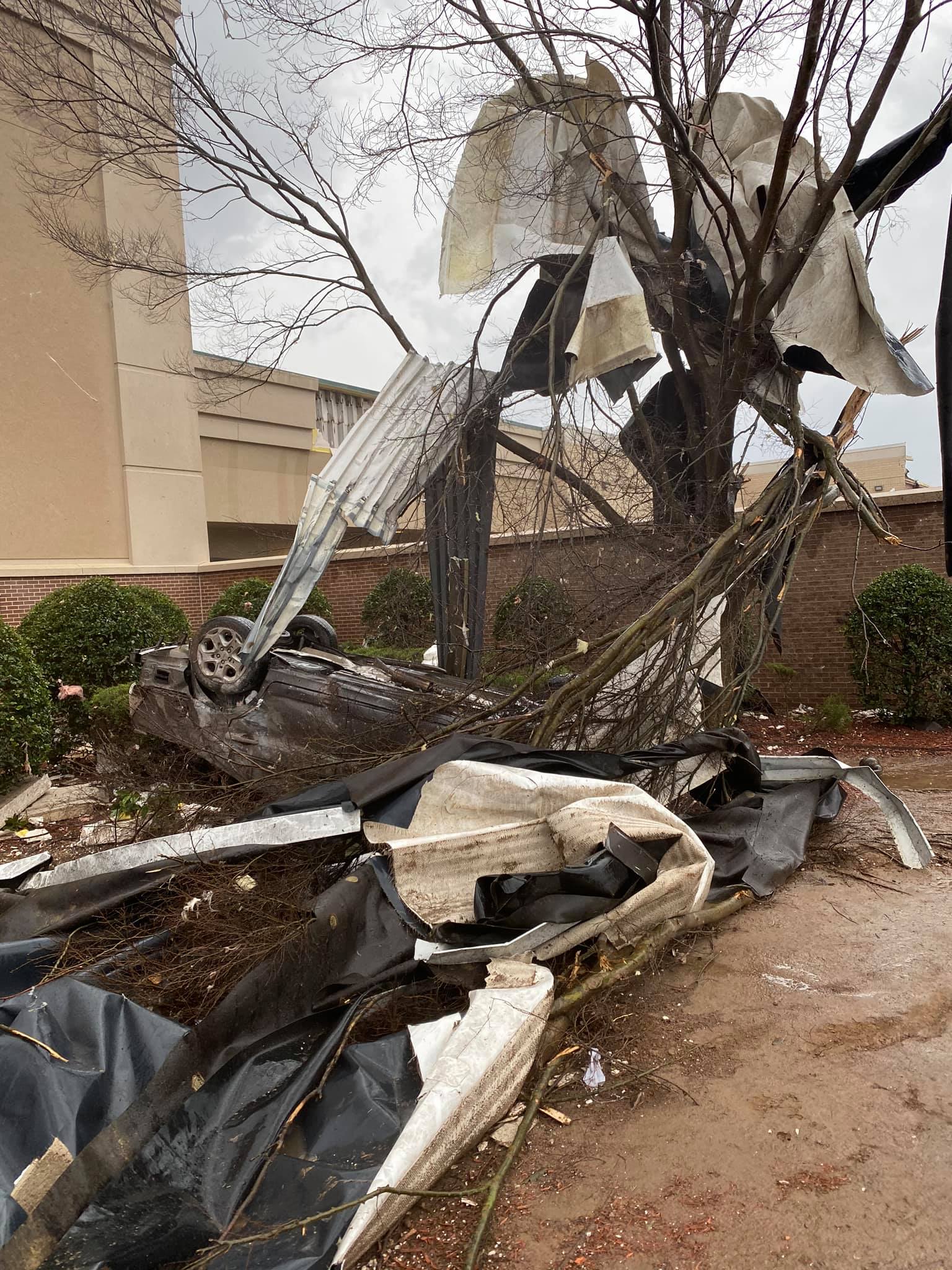 “It had a psychological effect,” says Antony Coy, the director of the Craighead County Office of Emergency Management, who took over the position only six months earlier. “You couldn’t see the virus. We were telling everyone to wash their hands and maintain social distance, but we’d go for long periods of time not knowing what was working. We were putting messages out, but we were wondering, ‘Are we doing enough?’ It was getting depressing.”

The four-story City Hall closed its doors to the public and employees either worked at home or had their temperatures checked when they entered the building. City Council meetings were held online, and the mayor installed a “hotline” where viewers could call in to discuss city matters during the meetings. It took twice as long as usual to conduct city business, the mayor said, but it seemed to be working. The number of infections was low compared to other counties in the state. 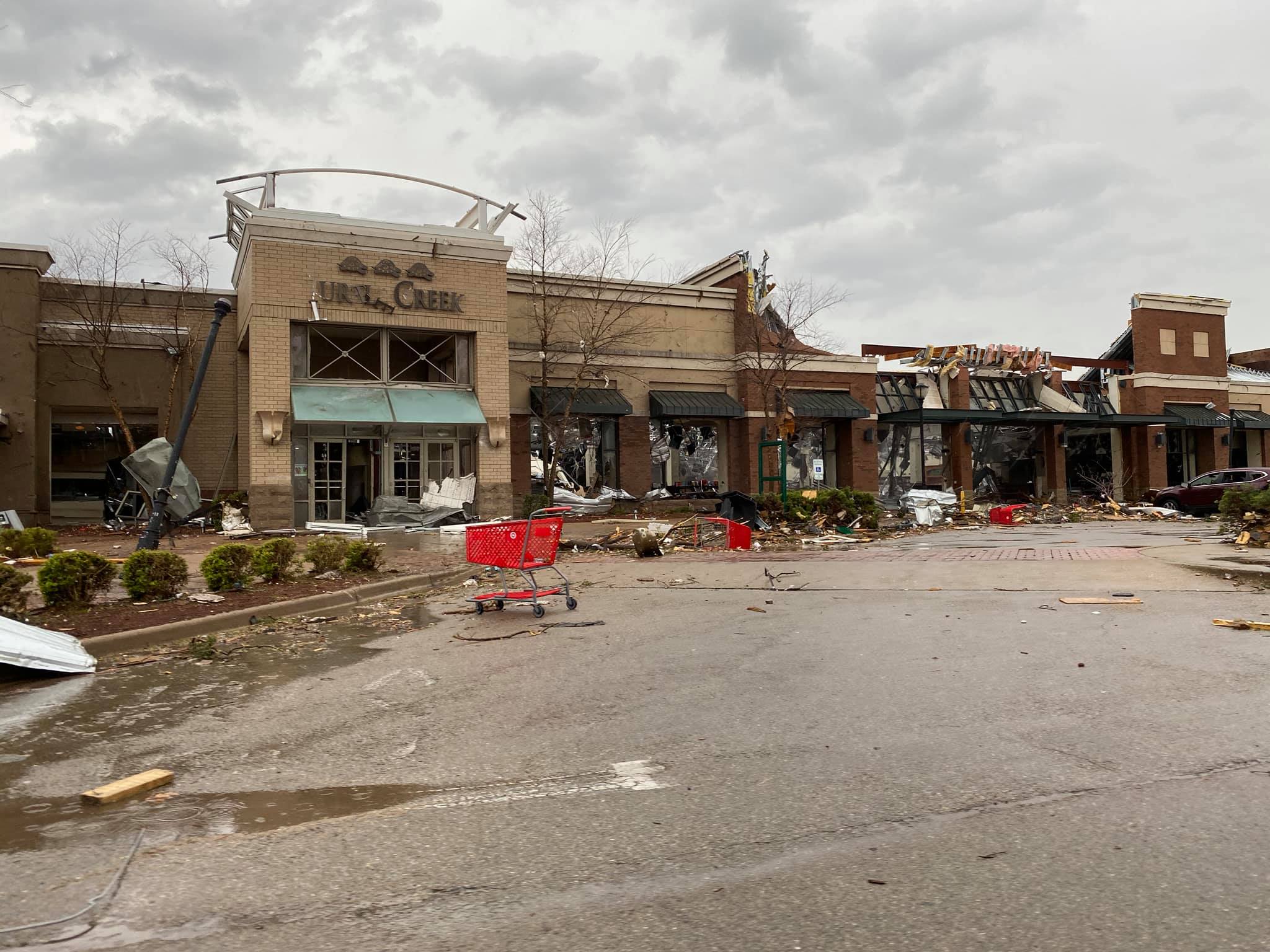 The destruction left The Mall at Turtle Creek in shambles. (Photos courtesy of Jonesboro Police Department)

“For the first few days, we were still getting calls, but then it went quiet,” he recalls.

It seemed everyone was dealing with the “new normal” as best they could.

A series of supercell thunderstorms had formed over Arkansas that afternoon and intensified as they moved to the northeast corner of the state. The system spawned one tornado that touched down in a rural area near Cash before weakening. The cell then reached Jonesboro, and at 4:58 p.m., a rope-like tornado snaked out of the sky as it crossed I-555. It quickly formed into a large wedge and touched down, smashing a dry cleaning business and an automotive center at Caraway Avenue and Race Street. It then headed toward the Mall of Turtle Creek, crashing through its center, before moving toward the airport. At its peak, the twister was 600-yards wide, the National Weather Service in North Little Rock reported.

“We were trying to get used to the virus, and then we have a tornado,” Coy says. “All you can do is say, ‘Really? Really?” 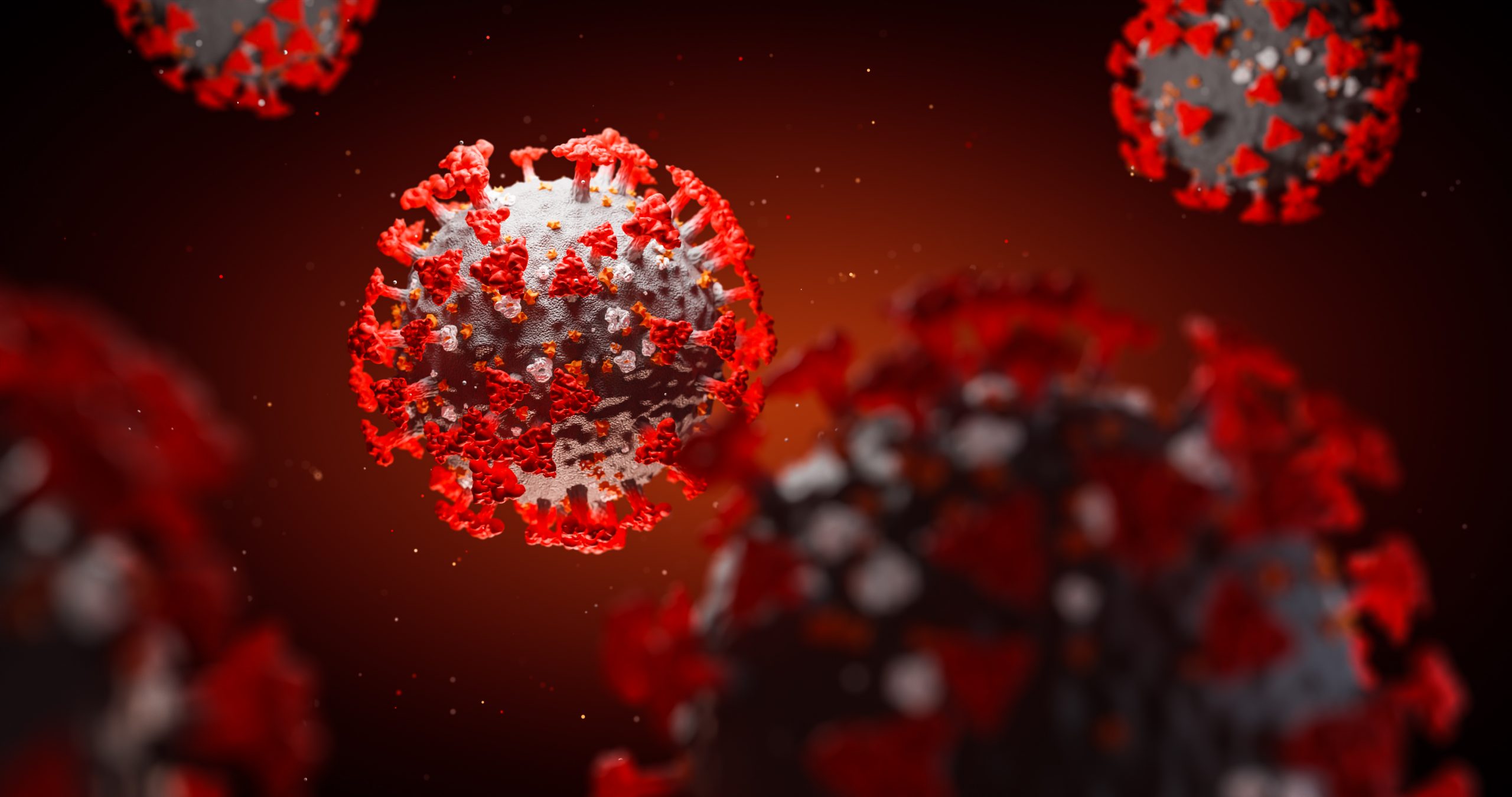 Concept art of SARS-CoV-2, the strain that causes COVID-19.

Holmes ran down the hall of her Prospect Road home when she heard the tornado’s roar. She grabbed a mattress and covered herself, waiting for it to pass. She could hear a staccato sound that she later learned were two-by-fours from other damaged homes blown into the side of her house like spears. “I began praying,” she says. “I was ready. I figured if it was time to go, it was time.”

The storm continued northeastward, tearing roofs off of houses in another subdivision, missing a nursing home by less than one mile and then demolishing a furniture store on U.S. 49 at what is locally known as the “Farville Curve.” The high winds also toppled a train near the city’s airport, and officials were initially concerned that cars could be leaking hazardous materials. Coy called the railroad and found it was only carrying ethanol. After cutting a 12.5-mile path, the tornado ended just outside of Brookland. Later, people found receipts from Kirklands, a home decor store across Highland Drive from the mall, scattered in woods some 30 miles north of Jonesboro.

Police Chief Elliott, who lives on the southwestern edge of Jonesboro, saw the storm as it passed overhead. “I could see the rotation,” he says. “I could see it building. It was brewing as it went over. I told my wife, ‘I gotta go.’” Soon, more than 100 police officers and emergency workers converged at the Mall of Turtle Creek. 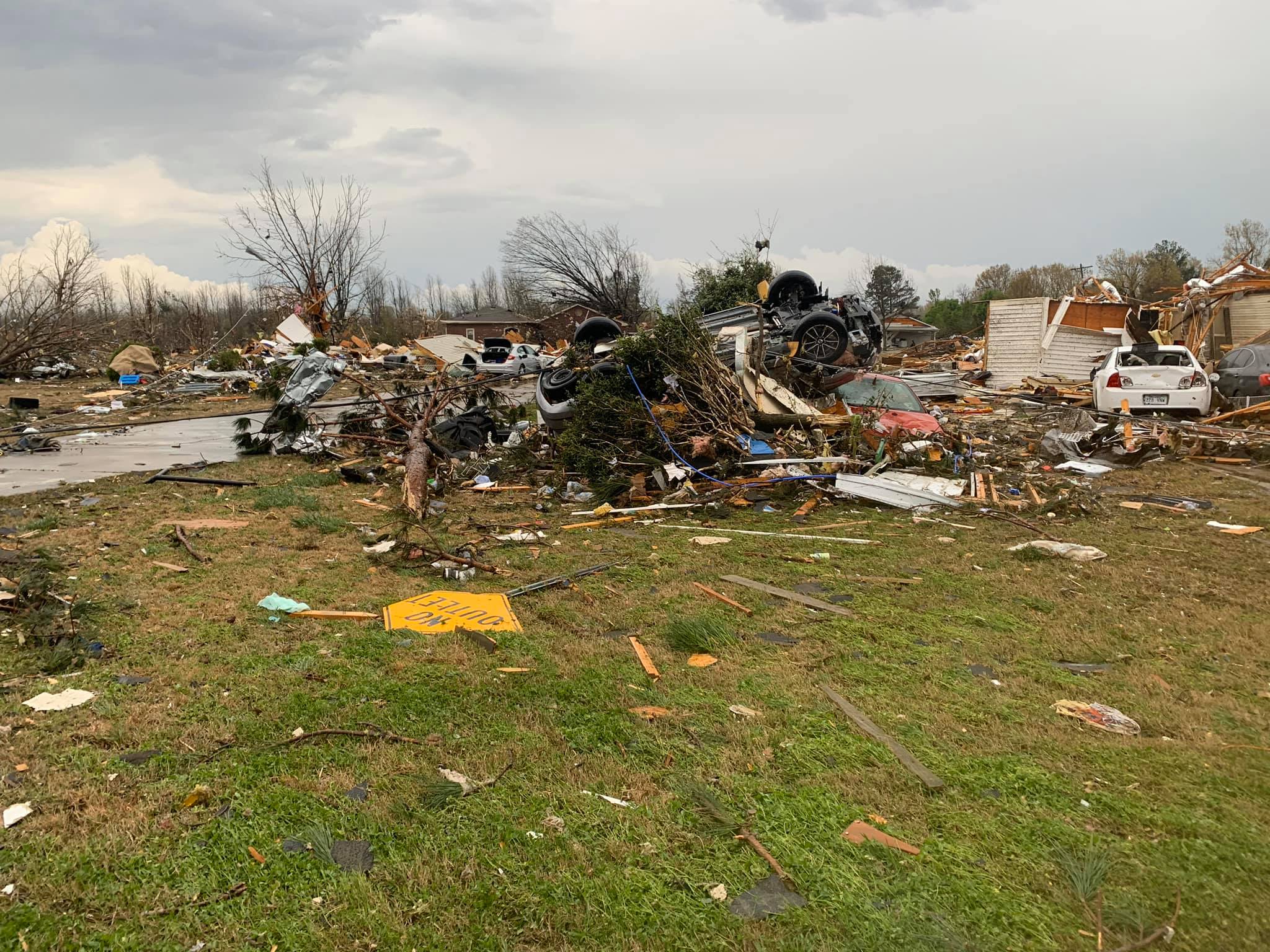 “I didn’t know who we had hurt or dead,” he says. “We realized we had to do what we had to do. We had to see who we could help. Social distancing was out. When I saw all that destruction, COVID-19 was erased out of my mind for a while. We all jumped into the middle of it. We weren’t worried about the virus at that point. We were worried about our peoples’ safety.”

In an ironic twist, the virus — which has killed tens of thousands elsewhere — saved lives in Jonesboro, Elliott says. Twenty-two reported minor injuries. There were no fatalities.

“The virus kept people home,” he says. “Had the mall and [nearby] restaurants been open that Saturday afternoon, we would have had fatalities.”

Workers put tarps across gaping holes in roofs, and police officers checked homes that night to ensure residents were safe. The tornado destroyed 149 homes and damaged 600 others. After that first night, Elliott says, he waited.

“I was sweating that we could lose a lot of our [165-man] force to the virus. We didn’t lose anyone. It was a blessing,” he says.

“You couldn’t base every decision that night on staying at least six feet apart,” Coy adds. “But you wanted to be careful. You play the hand that is dealt you. We could push COVID-19 onto the back burner, but not off the stove.”

Holmes was overwhelmed with the quick response by police and emergency workers. “They were in the back of trucks rolling in,” she says. “Nobody cared about the virus just then. I saw one person with gloves on. Everybody else didn’t have any. They were all caring about helping everyone.” 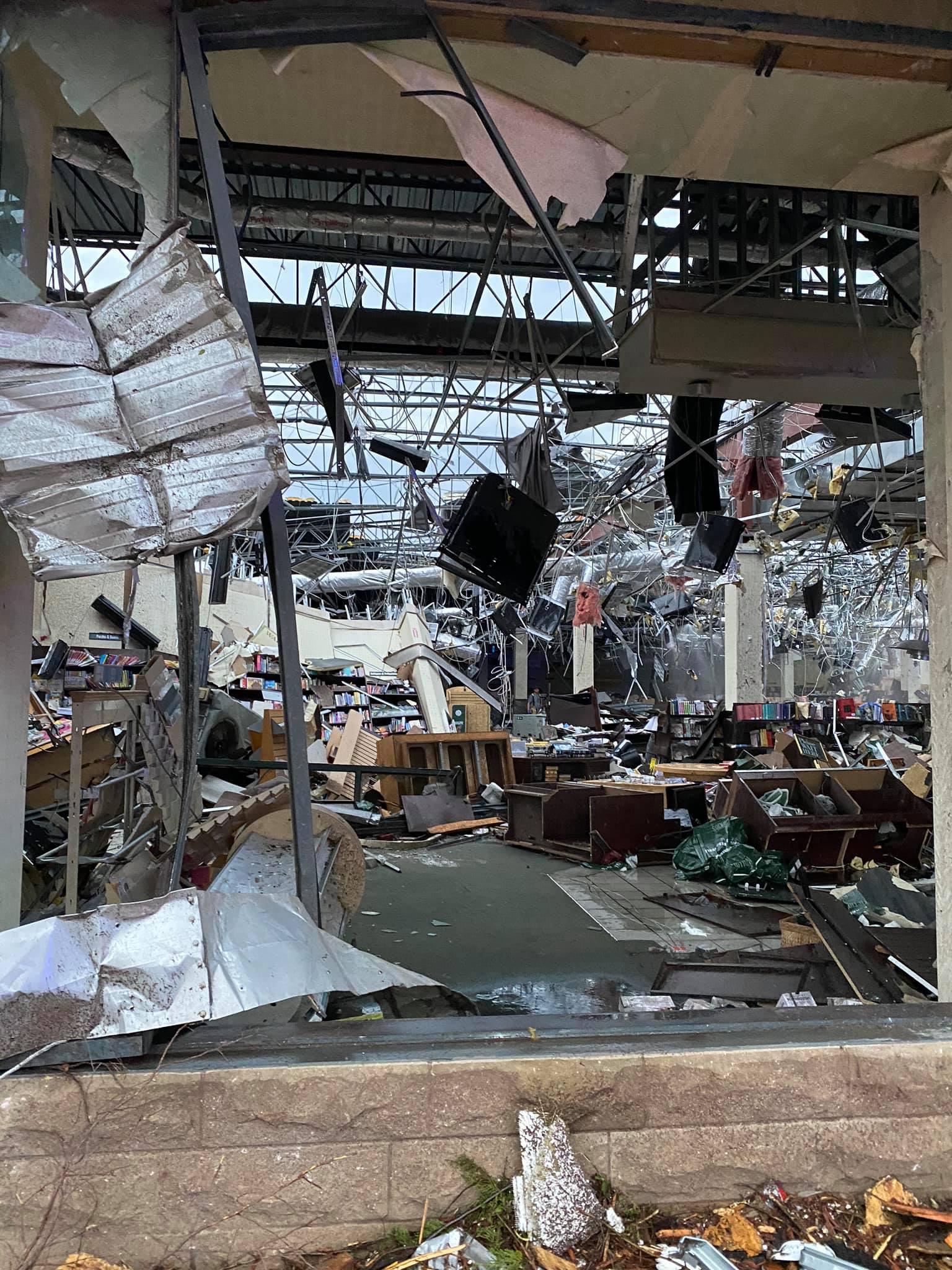 The next day, restaurant workers brought food to the damaged areas. “I told them to take it to others who had worse damage,” Holmes says. “But they said they had plenty for everyone. They left the food on the porch. They were maintaining the distance, but you could see they really cared about us.”

Ten days later, on April 8, it happened again. An EF-2 tornado with winds of 125 mph struck Harrisburg, a Poinsett County town of 2,300, about 20 miles south of Jonesboro.

Elliott says his wife packed bottled water and snacks in his vehicle, and the chief and several of his officers headed to Harrisburg to help. Two people were injured in the storm when their home was damaged. Again, despite the close contact with workers sifting through rubble, no one contracted the virus.

“Jonesboro is the most loving and benevolent town I’ve lived in,” Mayor Perrin says. “We’re fighting an enemy we can’t see. It’s not over, but we all pulled together.”

More than two months after Jonesboro’s tornado, progress can be seen in the damaged neighborhoods, and that’s an encouraging thing, Coy says. Blue tarps cover holes in roofs, debris has been cleared from lots and new homes are already framed.

“Other than seeing, after time, that people weren’t getting sick, we had no immediate positive signs,” Coy says. “We can see the destruction left by the tornado being cleaned up, and it’s a sign of progress and that we’re moving forward. It’s amazing what you can do when you think you can’t.”