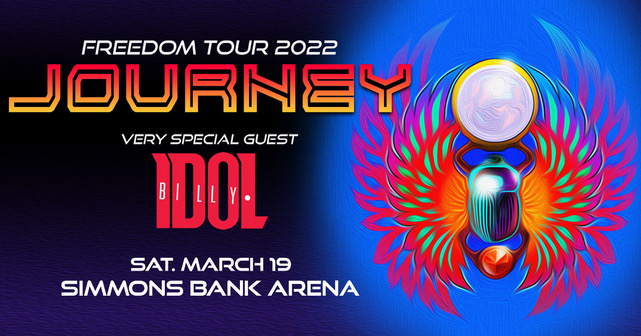 “It’s that time — time to get back to where we are used to being, on stage,” says group founder and lead guitarist Neal Schon. “We are looking forward to shifting into high gear and bringing you the best show possible. The band is running on all 12 cylinders and very excited! Please come and join us once again for an evening full of rocking stage connection fun. See you soon friends.”

Billy Idol has become one of the most recognizable faces of rock ‘n’ roll for 45 years — after three punk rock albums and a transatlantic trans-genre solo career.

“Touring next year with Journey is going to be great fun! An epic night you won’t want to Miss,” Idol says.

Tickets will go on sale Friday, Nov. 19 at 10 a.m. with prices of $45, $65, $85 and $125. There will be an eight-ticket limit per household, and tickets will be available at Simmons Bank Arena Box Office and at TicketMaster.