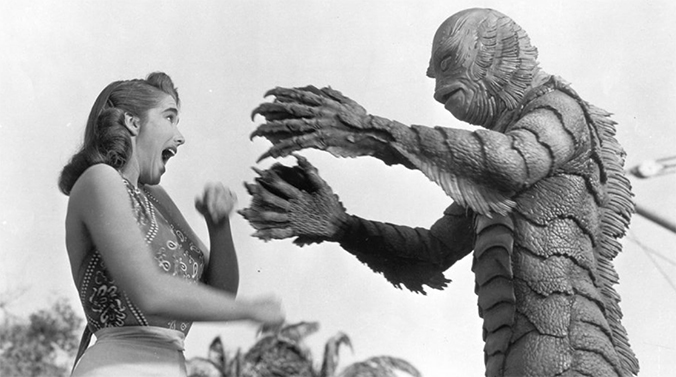 A Hollywood legend with Arkansas roots has passed away this week.
Julie Adams, star of 1954’s The Creature from the Black Lagoon, died Sunday, February 3, in Los Angeles, at the age of 92.
Born Betty May Adams, she was born in Waterloo, Iowa on Oct. 17, 1926, to two Arkansan parents. She spent much of her childhood in Arkansas and graduated high school before heading off to Hollywood.
Her most famous role is as Kay Lawrence, the damsel in distress, in The Creature from the Black Lagoon. The film is now considered one of Universal Studio’s classic monster movies.
In addition to her star-making role, she starred in Bend of the River, a Western directed by Anthony Mann and co-starring James Stewart. In addition to her many film roles, Adams became a regular fixture on early television shows. She appeared in both The Andy Griffith Show and Perry Mason. In fact, one of Adams’ characters on Perry Mason was the only one of Perry Mason’s clients ever convicted on screen.
After the 1990s, her career began to slow, but she continued working. In the 2000s, she appeared on CSI: NY, and her last role is reported on IMDb as a 2018 short film “The Lucky Southern Star.”
On Twitter, multiple celebrities mourned her passing and paid tribute a starry career. Director Guillermo del Toro said, “I mourn Julie Adams passing. It hurts in a place deep in me, where monsters swim.”
READ MORE: Interview with Arkansas director Daniel Campbell
Image courtesy of the Hollywood Reporter/Photofest