A Thousand Miles From Nowhere

Justin Moore’s Music Comes from the Places He Knows Best

It’s a Tuesday night, and the clink of softball bats and the swish of ponytails fill the Arkansas air. In the stands, parents shout encouragement, chat and laugh between innings and keep tabs on younger siblings racing around nearby.

Justin Moore, one of the brightest stars in country music and Arkansas’ native son, is here too. But it’s just “Coach” around the dugout, which is what he is three game nights and Lord knows how many practices a week.

“It’s much easier now because fortunately, the more success you have, the more you’re home. Kind of funny the way that works,” Moore says. “My record label knows, and my promoter and manager know that during softball season I’m not playing shows except Friday and Saturday because my kids play Monday, Tuesday and Thursday. So, I’m coaching those days. They don’t even ask.”

The weekly games are a big deal around the Moore household, but a far cry from the packed stadiums when he performs. But then Poyen, Arkansas – population 290 at last count – is also about as polar opposite of Nashville or Austin or L.A. or any other locale to which stars of his magnitude tend to migrate when they start thinking like stars.

Which is exactly why Moore’s still here, shagging pop flys and high-fiving a play at the plate – the here is where life happens and from which he draws the yeast for his art. And the longer he’s in the music game, the more he appreciates how important – and universal – the here is, too.

“I think it matters more to people that they know who you are. I think they want to buy into a person and an artist,” he says. “I’m trying to provide insight as to who I am as a person because I really think people care about that. Songs like “Small Town USA” that explain exactly how I grew up and where I came from, I think, matters to people.”

Moore never wanted to leave his hometown, much less his home state. But back in high school when he started kicking around the idea of a music career, it quickly became apparent that he needed to, as Moore calls it, “move to town” (Nashville) to get a handle on what he was getting into.

“I remember asking my manager, 18 years ago now, he was talking about record deal this and that, and I said, ‘I gotta stop you,’” Moore remembers. “Looking back, it’s a wonder he didn’t run for the hills, but I go, ‘What is a record deal? I don’t even know what you’re talking about.’ You know, I’m a dumb 17-year-old kid from rural Arkansas.

“Being in town is huge. I never wanted to move away from Arkansas, but I wouldn’t be where I’m at had I not done it. That was the biggest key, that and surrounding myself with people who were professionals at what I was trying to become a professional at and just learning from them.”

Moore proved an apt pupil as he paid his dues honing what he had to say as an artist and a songwriter. His 2009 self-titled debut went platinum behind the No. 1 single “Small Town USA.” His sophomore effort, Outlaws Like Me followed suit, with the chart-topping “If Heaven Wasn’t So Far Away.”

His third album, the critically acclaimed Off the Beaten Path earned him New Artist of the Year from the Academy of Country Music (ACM) and 2016’s Kinda Don’t Care topped the country albums charts. Side projects included a spot on the Mötley Crüe tribute album Nashville Outlaws where he sang “Home Sweet Home” with Crüe frontman Vince Neil.

July will see Moore’s next record Late Night and Long Necks, which has already spawned a single and video, “The Ones That Didn’t Make It Back Home.” The tune about raising a glass to the fallen treads a familiar country music trail of supporting the troops and waving the flag, but Moore’s personal backstory (both of his grandfathers were vets) keeps it from sounding cliché or contrived. 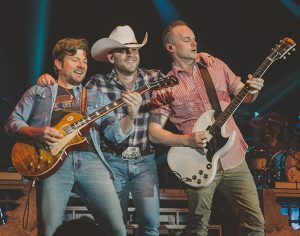 “One reason I had the idea to write that song is, every night on stage I talk about our military service men and women and our police officers and firefighters and unfortunately, our teachers and our nurses who are in the line of duty now, which is sad,” he says. “I talk about them before we play ‘If Heaven Wasn’t So Far Away’ every night. For eight years now, when we play that song, I always say, ‘We’ll send this out to the ones that didn’t make it back home.’ 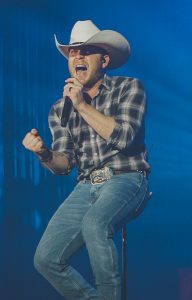 “Now why it took me eight years to realize that would be a good song idea, I don’t know. I guess better late than never.”

Listening to Late Nights and Longnecks, what stands out is how grown up the subject matter is. At 35, Moore is hardly a wizened old geezer – as the rave-up “Why We Drink” attests – but many of the tracks tell as much about what happens after the party’s over, be it a night out (“Someday I Gotta Quit”), a relationship (“Airport Bar”) or a marriage (“On The Rocks”).

“I’m proud of a lot of things I’ve written over the years, but I think from a songwriting standpoint, this is the best songwriting I’ve ever done,” he says. “There’s less of the hell-raising, beer-drinking stuff. I mean, there is some of that stuff on there, but I think the subject matter is probably more mature which helped us write more mature songs.”

Nowhere is Moore better than on “Jesus and Jack Daniels,” a memoir that’s in turn funny and poignant, revelatory and instructive on the attraction of opposites (“Mama loved Jesus, Daddy loved Jack Daniels,” Moore sings) and what it leaves you with (“I’m a little hell yeah, I’m a little hallelujah.”) It’s a throwback record that’s among the finest he’s ever done.

“It’s really one of those songs, to me at least, that it’s kind of the angel on one shoulder and the devil on the other,” Moore says. “Certainly, we all have different degrees of the nature of it being one extreme or the other. I think we all, to some degree, struggle with that.

“I know myself, personally, I like to have a good time. Ninety percent of the time I make the right decisions, but I’m still an idiot and have one too many cocktails and pop my mouth off to somebody every now and then, you know?”

Moore chuckles at the thought, and you chuckle along as though you had been there to see it. Because in a sense, you have, through your own wilder days, days that have started to level into the demands of family, the complexities of faith and yes, sometimes the sting of failure. Things change – relationships, jobs, habits – and Moore’s particular skill is giving voice to these struggles be they in Beverly Hills or on a dusty ballfield outside of Poyen.

“People say to me every night at meet and greet, the most common question is, ‘Why do you seem so normal?’ I’m like well, hell, ‘cause I’m normal,’” he says. “I realize all this could be gone tomorrow, and if it were, I wouldn’t be bitter a bit. I’d be happy as a lark and say, ‘Man, that was an unbelievable run.’ I’ve still got four beautiful kids and a wife back home and a mom and dad who love me and are proud of me. I think it’s just keeping things in perspective; my list of priorities has changed over the years.

“I’ve achieved way more than I ever thought possible, so anything else in my career is just kind of like the cherry on top now. From that perspective, the pressure’s kind of off of me, I believe.”