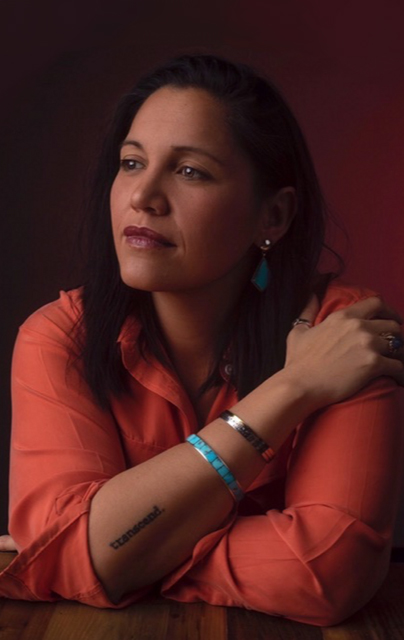 Not only does Coggin write and publish her own poems, she is also the host of Wednesday Night Poetry, the longest-running consecutive weekly poetry open mic series founded by Bud Kenny on February 1, 1989. 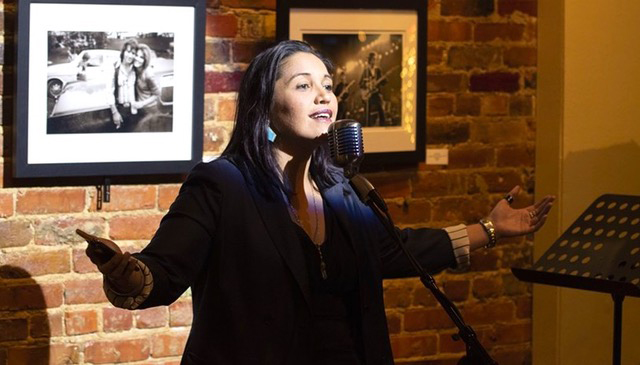 Wednesday Night Poetry was held each week at Kollective Coffee & Tea in downtown Hot Springs prior to the pandemic, but now Coggin has been hosting a virtual open mic series called “Poetry Through the Pandemic” to continue Kenny’s legacy and for anyone to share. This week marks 1,647 weeks in a row for the open mic series, but 23 weeks in a row virtually.

“I write a poem and share it as an introduction to elevate the message I try to bring each week,” Coggin says. “I also have been putting my hand up to the screen and inviting people to put their hand up to their screen as a way to bring us together without physically touching. It is a way to send power, love and energy.” 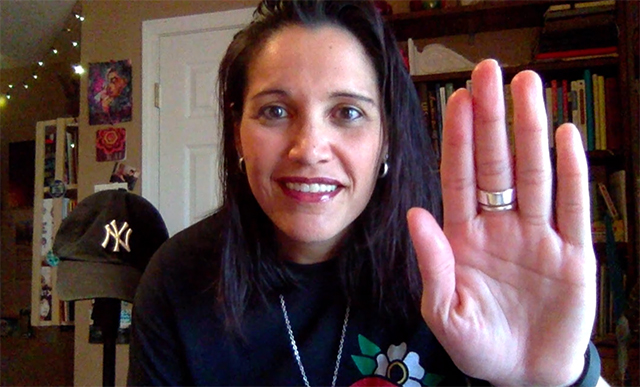 The silver lining is that even though gatherings at Kollective Coffee & Tea have not taken place in a while, Coggin has made a platform online to expand  the poetry community. More than 1,000 videos from poets all over the state, country and world have been shared on the Wednesday Night Poetry Facebook page. She typically has anywhere from 35 to 50 videos sent to her every week now.

“We are all alone together with poets sending videos of them reading from their house,” says Coggin. “It has been nice as the host to curate the videos and amplify marginalized voices. I try to cultivate empathy and light. Good poetry can bring anyone together by finding common threads in humanity and having a ripple effect.” 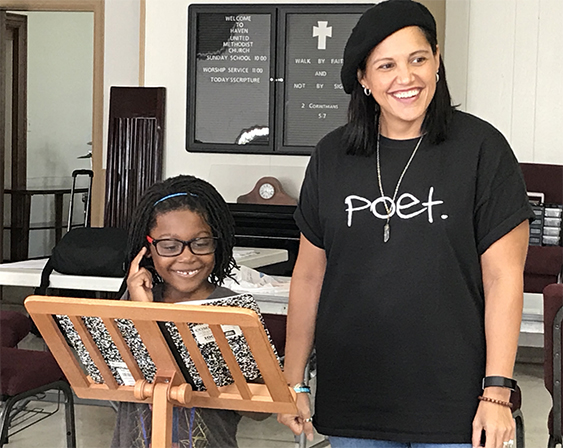 Coggin first became interested in writing and poetry when she was a young child. Born in Bangkok, Thailand, she moved to Houston, Texas after her parent’s divorce with her mother and little sister at the age of 7.

“Writing sort of became a friend to me,” says Coggin. “As a child, I went through a lot and had to grow up really fast. I had things I couldn’t share with anyone else, but I wrote my feelings down in journals and diaries.” 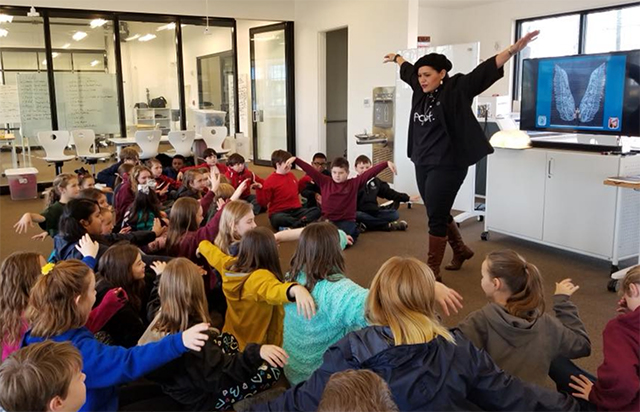 Her poems are inspired by personal experiences and current events. She talks about her hardships from childhood, struggling with sexual identity, racism, immigration and so much more.

“Even when no one is around, you can find a friend in poetry,” Coggin says. “It is a safe place for your feelings.” 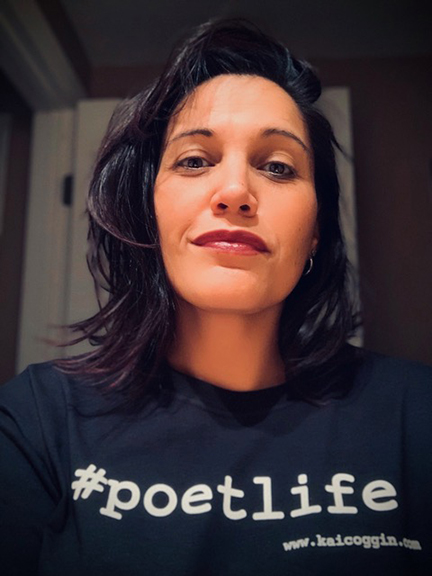 She describes poetry as a “healing process” and “mode of reflection.”

Another passion of hers is being a teaching artist associated with the Arkansas Arts Council and Arkansas Learning Through the Arts to introduce students to poetry. 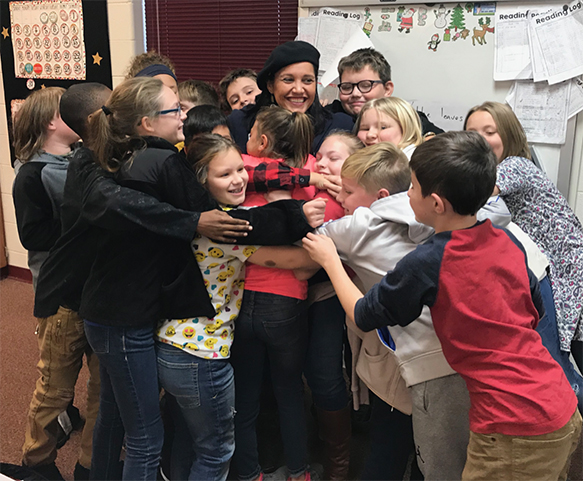 “I have worked with them for the last four years and love seeing the tiny poets around the state,”  says Coggin. “I go to different schools to show students that they can actually have a career as an artist. Last year, I taught nearly 3,500 children.”

According to Julie Zimmermann who nominated Coggin, “She is dynamic, stands up for the disenfranchised and provides a forum for self-expression. She is fearless and inspirational and has contributed much to the life of the arts in Arkansas. No doubt she will probably enjoy the honor of being poet laureate for the state in her lifetime.” 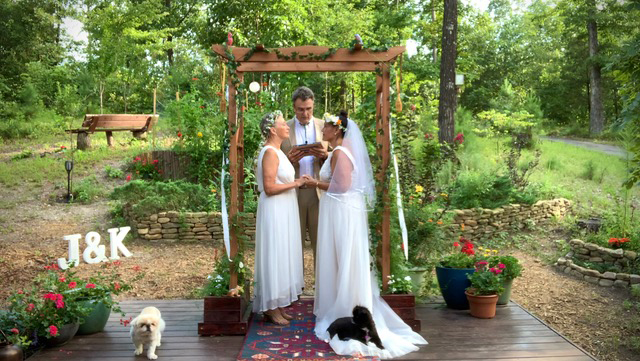 Coggin enjoys spending time with her wife, Joann, who is a master naturalist and two pekingese Genghis and Layla. Below is a poem she wrote about chasing the Comet NEOWISE with Joann last month called “Aperture.”

I wrote this poem

before I wrote this poem,

already saw it taking shape in the sky,

out of the mouth of the big dipper,

on a mountaintop next to you,

we chased the comet

and wandering northwest toward a horizon

we could find ourselves in,

on the star trail of a comet that rises

and, my love, tonight we are here

just up the mountain road by our house,

the theater of galaxies

at the top of our darkened street,

the clouds dissipate into clarity and

the heavens open up

that can only come

the paw of a great bear coming down

to touch our faces,

to brush our wild eyes with gold,

we lay in the middle of the street,

in plain view of the firmament,

we drink in the twilight

knowing the tail of light trailing behind a burning star

and the falling crescent kissing the tops of pines

will dance for hours

and we are here, and you are mine

all I think of is aperture,

can slowly inhale the stars

in a long exposure

and my long exposure

has only taught me

the concept of opening fully

to let all the light in,

when the world is flooded with

what else can we chase

but the blooming cosmos

flower in the garden,

the lark song in the trees,

there is a double meteor shower

raining fire in the sky

we are building a tent outside

and I will chase

all the light with you

I will chase all the light with you.