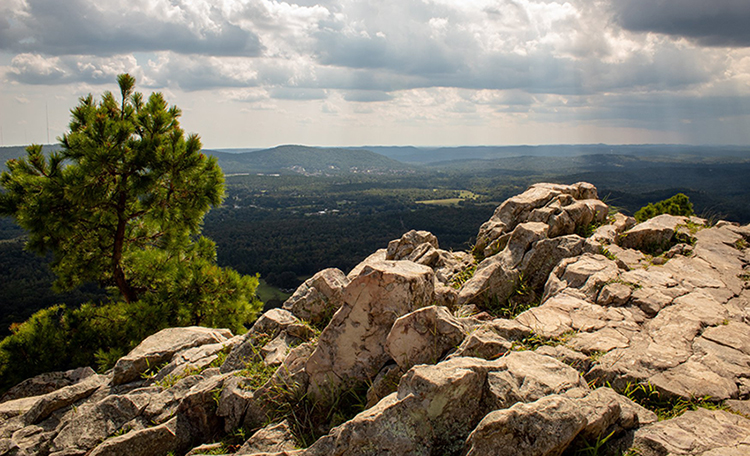 The slogan, “the Natural State,” has long been the descriptor for the state of Arkansas. It’s simple and concise, but also bigger than itself. Our many lakes and rivers, mountains and valleys, all flow through those three words, each contributing to the life cycle of our beautiful state in their own unique ways.

But it might surprise people to remember that this was not always so. Arkansas has had several different nicknames over the years. In 1923, the Arkansas General Assembly officially adopted the phrase, “Wonder State,” which would hold true for 30 years. But in 1953, the General Assembly weighed in again, and replaced it with a popular moniker that had been picking up steam for a decade, “The Land of Opportunity.”

Arkansas as the Land of Opportunity meant a great deal to the state. Its origin stemmed from a group of Little Rock businessmen, known as the Committee of 100, who were working vigorously to promote economic development in the state and dispel the notion that Arkansas was largely underdeveloped and backward, a southern stye out of touch with the rest of the country.

Despite the importance of the nickname, it too found an eventual replacement, one that proved to be of even greater meaning and relevance to the state. Something that speaks to the pride that all Arkansans feel for home — no matter what they do, where they live, or where they end up. In 1995, Act 1352 officially recognized Arkansas as “the Natural State.”

This distinction is not only a description but also a promise, a duty that all Arkansans have in upholding such ideals, in living true to the words on every license plate. It’s a vow to our state that we will keep it so, hold it dear and not destroy it with every other activity we involve ourselves in. 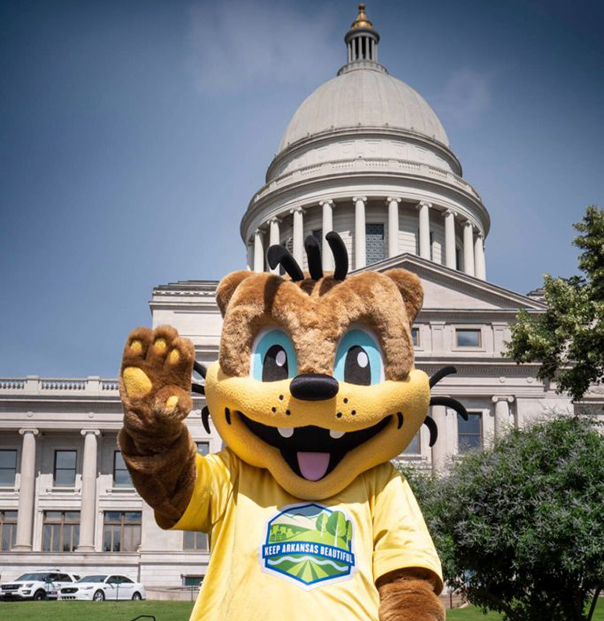 Keep Arkansas Beautiful was created in 1997 through Act 1278. It is a state agency, a division of the Department of Parks, Heritage and Tourism, and one of four that share the 1/8 cent Conservation Tax. It is a small operation, generally limited to a staff of three and statewide volunteers, but its impact is large, a credit to the man in charge.

At its core, the commission has a simple mission, one against trash, which is one of the biggest detriments to any state’s landscape. But the branches from that stalk are far-reaching.

“I’m not from this space at all,” says Mark Camp, executive director of Keep Arkansas Beautiful. “I’ve just been an anti-litter guy, just like Gov. Asa Hutchinson. [Litter] really bothers him a lot, and I’m the same way. I just had an opportunity to spend some time here and try to have an impact. But my impact is, ‘How do we change?’ — wake up in 10 years and what’s different? I don’t want to be better at cleaning up other people’s messes.”

But that is an activity that the commission has committed a clean sweep. It hosts two big projects every year, the Great American Cleanup which is running now through the end of June, and the Great Arkansas Cleanup which takes place in the fall. Camp estimates that around 15,000 Arkansans are registered and actively volunteer with Keep Arkansas Beautiful for such events.  In addition to the major cleanups, Keep Arkansas Beautiful also has other awareness-related campaigns, which lately have included advertising, such as billboards, and partnerships, such as the one with the Little Rock Zoo — getting in front of people with the message in as many ways as possible.

But the most important thing that the commission does, in Camp’s mind, is education, primarily revolving around prevention so that such large-scale cleaning up is not so necessary.

However, he is well aware that adults are creatures of habit, set in the ways ingrained in them for decades. Adults are harder to change and impress the need for change. Children, on the other hand, are a different story.

“Our big push is to get to children, to educate children, to help teachers and educators across the state to have the conversation, to have that awareness so that kids will grow up thinking differently about it. And if we can get the kids, then we’ve got the parents, right?” Camp says.

Part of why children are more apt to invest their time and energy into causes that involve being cleaner, greener and reducing environmental impacts, is the images burned into their brains at younger, moldable ages. Pictures of sea turtles with straws sticking out of their noses. Photos of malnourished polar bears confined to a melting square of ice. Usually, they recall animals that look to have been mistreated by the sins of society. Camp needed a figurehead for the commission, one that was more wanted and recognizable than he, but also something that would stick with kids as they grew older. He needed a mascot. Otto the Otter was born.

“Mascots are amazing,” Camp says. “Every major brand, every sports organization, they’ve got mascots. So, we thought one way we could get the attention of children is to bring in our own mascot, kind of our Smokey the Bear for Arkansas. And as it turns out, otters are both on the land and sea, and they’re considered by most to be cute and adorable. That’s where Otto came from.”

Now, Otto is everywhere. His picture is plastered on almost all of the agency’s public verbiage (especially the ones targeted for children). He goes on the news. He visits schools and makes other public appearances. The commission has created coloring books featuring Otto, in English and Spanish, that are sent out to schools across the state. Otto has become Arkansas’ anti-littering superstar. So much so, that Camp has concocted a children’s book for Otto, where he will be joined by some new friends — all animals native to Arkansas — who really despise trash.

But Otto and friends really love recycling, too.

“In that whole recycling world, it is ‘Reduce, Reuse, Recycle,’” Camp says. “Again, it’s education. We want to say, ‘Single-use plastic is bad.’ Carry a water bottle, if you can, to reduce the amount of plastic bottles we have out there … Don’t use single-use. Don’t create the problem. Most of Arkansas doesn’t even have recycling available, and therefore, you don’t have a choice. Little Rock just dropped glass recycling.”

The world of glass recycling is a weighty endeavor, not just for the amount of glass waste that accumulates, but also because of the costs involved. Locally, ACE Glass has stepped up to the plate.

According to Courtney Little, president and general counsel for ACE Glass, the company has partnered with over 50 central Arkansas restaurants in collecting glass packaging and used alcohol bottles, is in the process of partnering with apartment complexes and has set up a residential pick-up service where ACE will collect homeowners’ glass curbside for $10 per month or $100 per year. For those who don’t want to spend the money, Little and his team have also installed community drop-off points at local businesses around the community.

ACE is also working on a processing plant in Little Rock, so at the very least the glass will be crushed and repurposed into abrasives for sandblasting. But there are also other options in the works that could make this recycled glass a hot commodity.

“The state is doing a study on what’s called a ‘glass foam aggregate,’” Little says. “You basically take glass and a foaming agent and rebake it, and it turns it into a lightweight rock that they can use for base on construction projects and roadbeds. So that could save the state a bunch of money.

“Our long term goal is just to collect the glass that we’re all using. Instead of throwing it in the landfill, put it back to use somewhere else, and do that in Arkansas, creating jobs in Arkansas and more economic benefit for the state.”

But recycling is only part of the puzzle, a small part, at that. Not only are concerns of availability relevant to communities outside metros but also viability. The U.S. Environmental Protection Agency estimates that only about 8 percent of plastic used is actually recycled.

“Recycling is great. We encourage it. But we need to reduce. If you want to have an impact, that’s it,” Camp says. “Somebody just came out with a six-pack-ring that is turtle food. So if it does end up in the ocean, it actually can be eaten. It’s coming up with ideas like that where we can have materials that are not going to hurt the environment; things that really do biodegrade. Then, it does not kill the fish and the turtles.”

And as much as conservationists, both by trade and by hobby, often exude a sense of kumbaya of coming together, there also exist some hard truths where softening the blow is not active enough to get the job done. It is up to people to change — not in the dozens, hundreds or even thousands, but by the millions.

“We have cigarette butts anywhere you go,” Camp says. “Cigarette butts really don’t biodegrade. The little fibers are plastic. It looks like cotton, and I think most people think it is cotton, but it’s plastic and it’s toxic and they’re everywhere. That’s the number one littered item in the world. And ultimately most of it goes into the waterways, into the ocean.”

Most often, when people cash their cigarettes, they flick them or simply stomp the butts into the ground. When it rains, those remnants get washed into gutters, paths that flow to rivers, lakes and oceans. The result is a toxic buildup of thousands of cigarette butts, deadly for fish and other wildlife.

“The world is so ‘now,’” Camp says, recognizing that people are going to have to place the future of the world above their current comfortability. “We have a small budget, there are three people, and we pedal as hard as we can to have an impact. But we’re limited.”

As this year’s Earth Day (April 22) approaches and lent season wanes to an end on April 9, perhaps the end of one could be the start of another. Stay in that same mindset. In honor of our planet and our state, consider giving something up that is detrimental to both. Do your part in helping keep our tagline true. Preserve our “Natural State.”

It’s easier to do your part in preserving our state’s beauty than ever before. To engage with Keep Arkansas Beautiful, either through volunteerism or coordinating an event yourself, visit keeparkansasbeautiful.com

At home, take stock of your life and tally up any unnecessary usage and waste you may have. Limit single-use plastics in simple ways through reusable water bottles and straws. If your city offers curbside recycling pick-up, make sure you know what is accepted and what’s not. If your bin is contaminated with food waste or an item that is not recyclable, it can often mean that your waste and any others affected will end up in a landfill.

According to the National Oceanic and Atmospheric Administration, an estimated 8 million metric tons of new plastic enters the ocean every year. To put that in perspective, that amount would equal the weight of around 90 aircraft carriers. But the problem with plastic is that, unlike other types of waste we discard routinely, it does not decompose and can last nearly forever. It wreaks havoc on the health of our oceans which in turn will negatively affect our lives if we do not stop the bleeding.