Keeping Active During the Coronavirus Pandemic 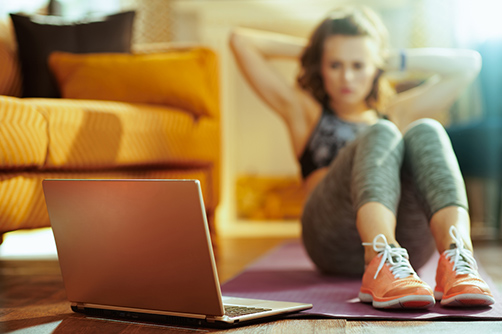 With gyms and fitness centers in Arkansas shut down due to the current coronavirus pandemic, thousands across the state are finding their fitness routines disrupted. Working from home can create challenges for keeping exercise programs going, but there are ways to adapt and stay healthy.

Katie Tarkington has been a certified personal trainer and nutritionist since 2015, and she does all her coaching and meal plans online.

“So far the pandemic hasn’t really affected it that much,” she says. “If anything, it’s helped because people are wanting something to do that are usually active out of the home, and they have no choice now.”

Doing everything online allows her to keep in close contact with people who sign up out of state, all while without having to meet up.

Her recommendations for people who don’t want to leave the house? Yoga or using an elliptical or treadmill to maintain their steps.

“Planks are just about the best if you don’t have access to a gym because they work your entire body with constant tension,” Tarkington says.

The biggest challenge for people now finding themselves having to work out from home is developing the willpower to do so, according to the personal trainer.

“If you don’t have the willpower to do it, then it is something you really don’t want to do,” she says. “People that work out at home eventually hit a plateau, and that’s when it’s time to change up your routine.”

Changing up the exercise routine allows the body to get confused, and that will promote further growth, Tarkington says. It also prevents the person working out from getting bored of it.

“It becomes more of a ‘fun’ challenge for you,” she says. “When you set goals for yourself that you already have in mind [are] impossible for you to reach, then the chances are you won’t succeed because you are already setting yourself up for failure.”

Tarkington encourages those trying to continue their fitness journey during the pandemic to be true and reasonable to themselves. That’s when the results will happen. For more information on Tarkington’s fitness training, click here.

Karen Martin is an editor for the Arkansas Democrat-Gazette. She says the first thing she thought about when learning about her gym closing was maintaining her fitness routine.

“I’ve belonged to fitness centers for decades, and depend on their facilities to keep me sane. That’s what my current fitness center was doing until March 19,” Martin says.

Martin says she had some warning.   “The office staff checked who among their members show up at opening time and called each of us on the evening before shutdown to let us know not to come the next morning,” she said. “That was incredibly kind of them.”

She says one of the things she misses most from her gym is the lap pool. She swam there five or six times a week.

“It’s blissful, almost meditative, to utilize my slow but steady side stroke for 35 laps, during which I solve all the world’s problems. Well, except one,” she says.

In addition to the pool, Martin says she also attended yoga classes and did some circuit training. But there’s really no replacement for a large pool.

“I really, really miss the pool. There are no substitutes available, and I’m not about to leap into the nearby Arkansas River anytime soon,” Martin says.

With her gym closure, the editor said her current exercise routine is still evolving. She’s getting up at 5 a.m. and walking her three dogs for an hour or going for a run. Then she rides her bike for 60-90 minutes. After that, Martin said she lifts weights, does yoga and stretches for 20 minutes.

She then cleans up and hops back on the bike and rides 1.7 miles to her office, hauling the bike up several stairs (which is a workout in itself). When Martin gets home, she walks her dogs again.

The editor says her current workout routine is “okay,” but she can’t wait to get back to the gym, especially the pool. Then there’s also “excellent” showers in the locker room, according to Martin.

“I hadn’t taken a shower at home for months before all this happened, as I’ve been at the gym every day,” she says.

While her current fitness routine evolves, Martin says she’s trying to figure out if wiping down her shower walls count as exercise.

Monica Hooper is a receptionist and does page layout for the Northwest Arkansas Democrat-Gazette. Like Martin, she’s had to adjust her fitness routine during the pandemic.

She said switching from a gym to doing exercise at home hasn’t been as bad as she expected. Hooper even has some of her own equipment like weights and a jump rope. And then there are online resources like YouTube.

“There are so many exercise videos out there, and you can even specify ‘no jumping’ in your search so that you don’t wake up your toddler or shake the foundation of your walls loose,” Hooper said.

One drawback Hooper said she deals with is her weights aren’t very heavy, so she doesn’t feel like she’s getting any stronger.

“Plus, when I was outside jumping rope the other day, some weirdo honked at me,” she said. “Don’t even get me started on how many people stared while I was jogging around the block.”

Machines are what Hooper said she misses the most from the gym, especially treadmill and elliptical machines.

“Music helps me to stay motivated and push myself, but I can’t blare it at home without disturbing my husband and my kid,” she said. “At the gym, I could pop in my earbuds and really hit my cardio.”

When she was going to the gym, the page designer said she liked the supported bars used for squats and deadlifts.

“I have a lot of trouble with pain in my joints, especially my hips, so those supported machines helped me to keep good posture and form while lifting and squatting,” she said.

Since doing her fitness at home, Hooper said she’s discovered it helps when she can work out in the middle of the day. That way she has more energy.

Of course, Hooper also has to find a way to occupy her toddler while she works out.

“Sometimes he’ll do the cardio videos with me,” she said. “Other times, I lift weights and do sit-ups and pushups while Mickey Mouse Clubhouse plays in the background.”

The key, according to Hooper, is breaking up workouts into shorter sets. She does 20 minutes with Disney Junior in the background, then a couple dance videos. Hooper has also been sweating it out to the “Hot Dog Dance” at the end of each Mickey Mouse Clubhouse video. She added, “You just have to find ways to adapt.”

Jim Goza teaches classes at Clubhaus Fitness in Fayetteville and has been a trainer for five years. He’s also a health coach.

Goza said people who are struggling to maintain a fitness routine during this pandemic can actually do almost everything at home that they could do with health club-grade equipment. It just takes a little ingenuity.

“That’s one of the biggest ways I’m helping people right now. When you’re used to one routine, it can be a challenge to have it turned on its head,” he said.

Bodyweight movement is going to be the easiest to transition to since it requires no external sources of tension like dumbbells, kettlebells or bands, according to Goza.

“Running a HIIT circuit at home is a great way to stay active,” he said. “And better yet, you can do these with the whole family to keep everyone moving!”

Goza said the biggest challenge about home workouts is “home” is supposed to be a place of comfort.

“Exercise is inherently putting yourself in a compromised and uncomfortable position on a regular basis,” he said.

But at home? There’s television. There are books. Then there’s pets, kids, spouses, etc.

“You train your habits with locations and activities. If you go to the den where the television is, chances are you’re going to watch television,” Goza said.

The health coach said a good way of getting around that temptation is to find a space in the house, maybe the basement or a spare room, and dedicating it to exercise. By doing this, people trying to maintain fitness routines subconsciously trigger the need to move anytime they enter that dedicated space.

Goza also recommended keeping any external stimulus to a minimum.

Right now, the health coach said he’s regularly training people outdoors. He advises people to reach out to trainers and see if they offer similar services.

He added, “We have to keep a healthy mind, first and foremost. And the way to a healthy mind is from movement, sunlight and safe socialization.” For more information on Goza, click here.

There’s no set deadline for this pandemic to come under control and social distancing policies to wind down, so until then, people wanting to keep their exercise routines going will have to make some changes. But they don’t have to give up their fitness.