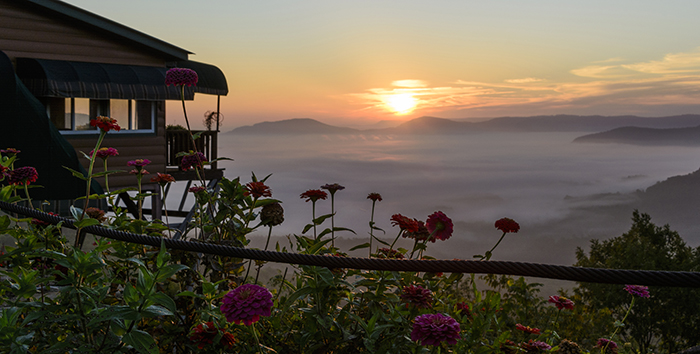 Wednesday evening, May 23, 1962, would prove to be an important one for Arkansas, although the 28 people gathered in the Fayetteville home of Harry McPherson probably didn’t realize it at the time. They’d responded to an invitation to participate in a meeting about the future of the Buffalo River, the headwaters of which lay about 50 miles to the east. The Buffalo had long been in the sights of the U.S. Army Corps of Engineers, who had identified locations for the construction of two dams across the stream, and those plans upset a handful of local folks.

One of those in attendance was Marion Wasson, a 32-year-old scoutmaster living in Siloam Springs. Wasson, now 91, and his family enjoyed the outdoors of Northwest Arkansas at every chance. The Buffalo was a favorite destination for Wasson and his boys, and they often floated the river in a homemade boat he’d made from a kit.

Wasson remembers that day in late May well.

“One of my good friends that I often camped with had heard about the meeting and said, ‘Let’s go see what we can do to help,’” he says. The get-together started out with coffee and cookies but soon got down to serious business. “It didn’t take us long to figure out that it would be in the country’s best interest to get the Buffalo turned into a national river.” 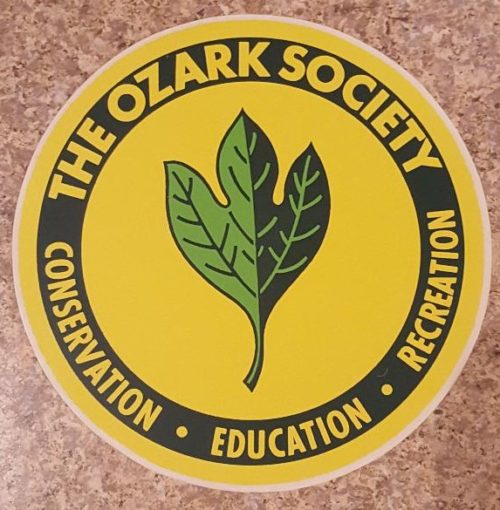 The group voted to organize the Ozark Society that very night, and each person in the room tossed a dollar bill into a pot.

“When you’re battling the Corps of Engineers, you have to remember that they’re kind of immune to everybody’s song but their own,” Wasson says. “I really didn’t know what to expect. I figured we were probably just grasping at straws, but we all wanted to do it anyhow.”

Dr. Neil Compton, a physician from Bentonville and the meeting’s initiator, made a strong impression on Wasson. “He was a very energetic gentleman,” Wasson says. “He knew that the idea would work.”

That very next evening, the Ozark Society was formally established. Convening in the Law School on the University of Arkansas campus, the group elected Dr. Compton as its president. But before the election was held, an inspiring film about Supreme Court Justice William O. Douglas’ recent float trip on the Buffalo River was shown. Douglas, the quintessential outdoorsman, had fallen in love with the stream, saying, “The Buffalo River is a national treasure worth fighting to the death to preserve.” 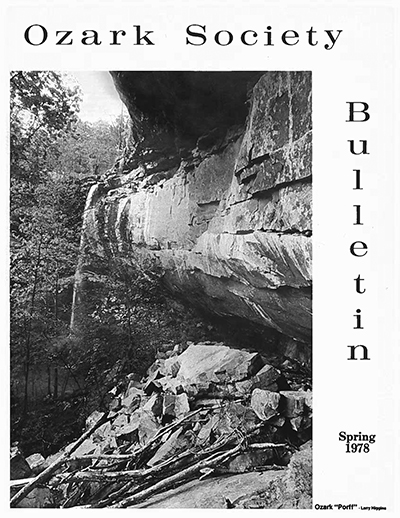 Well, nobody got killed, but the next 10 years were often pretty tense for members of the newly formed Ozark Society.

A week after his election as the society’s president, Compton sent a letter to Democratic Congressman Jim Trimble, whose district included the entire watershed of the Buffalo River. Stating, “We have laid the groundwork for what I believe will be a permanent organization that will function for many years to come,” Compton presented a strong argument for the preservation of the free-flowing river. Trimble, however, had already made up his mind, siding with the Buffalo River Improvement Association, a pro-dam body founded by James Tudor, owner of the Marshall Mountain Wave.

These two organizations — the Ozark Society and the Buffalo River Improvement Association (BRIA) — competed for public support for nearly a decade. Or as Compton put it: “The battle for the Buffalo would be fought hammer and tongs down to the last dog.” 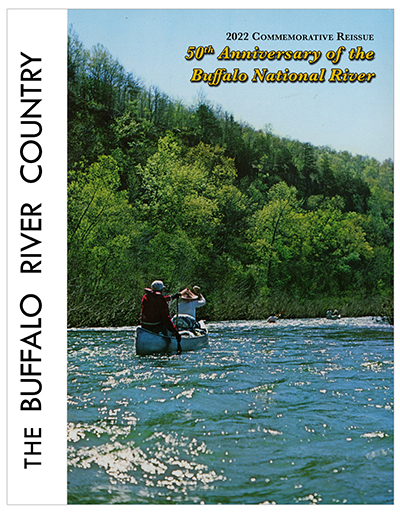 One of the first skirmishes occurred during the annual Arkansas State Fair in 1963. After a couple of successful ventures at county fairs in Northwest Arkansas, the Ozark Society rented a booth on the state fairgrounds in Little Rock. Their plan was to distribute promotional literature and ask fairgoers to sign a petition to save the Buffalo River. Learning of this, the BRIA leadership made a few phone calls to powerful friends in key state agencies and got the Ozark Society tossed from the exhibit hall.

A second incident occurred a few months later on the river itself. By then, membership in the Ozark Society had grown to some 400 individuals, including a small chapter on the University of Arkansas campus. This group announced an April float trip on the Buffalo River, and these plans apparently caught the attention of the BRIA in Marshall. After dark, a Searcy County Sheriff and his team approached what they thought was the co-ed group camping on a big gravel bar near Maumee. But the local men had gotten confused about the date and had inadvertently raided a traditional float trip of the Smallmouth Bass Society. Stunned to find no drunken students and embarrassed by their mistake, the de facto posse saved some face by confiscating a carload of contraband liquor.

Things got serious over Memorial Day weekend in 1965. Canoeists were horrified to find barbed wire stretched from one side of the river to the other at one point south of St. Joe. They then encountered 18 massive 100-year-old trees that had been felled, completely blocking the stream, and some paddlers reported gunfire peppering the water around them. One floater was quoted as saying, “If things keep going on like this, we’re gonna have another Vietnam up here.” 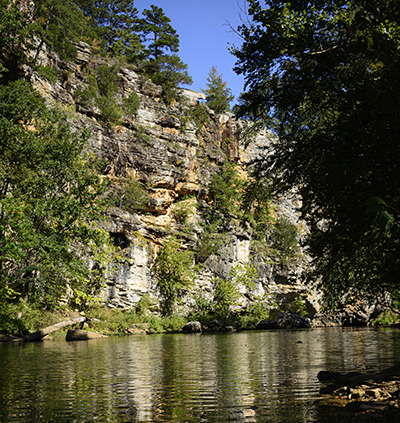 Meanwhile, in April, 1963, a young man named Ken Smith had returned home to Arkansas from his job at Yosemite National Park. He’d done some exploring in and around the Buffalo in the mid-1950s during his days at the University of Arkansas, and he got the idea to produce a book about the river. With a six-month leave of absence from the National Park Service and the blessings of the Ozark Society, Smith pursued his dream, exploring the Buffalo’s rugged landscapes via his Volkswagen bug and the river in a canoe borrowed from Compton. After driving 6,000 miles and taking almost 3,000 pictures, Smith then spent his spare time drafting the book. Published in 1967 by the Ozark Society and titled The Buffalo River Country, it was an instant success, helping to spur the public’s interest in a national river designation.

The Ozark Society and the BRIA kept jostling back and forth, hoping to prevail in the battle for political supremacy. Congressman Trimble remained steadfast in his support of the dams, and Sen. J. William Fulbright more or less straddled the fence, hoping to work out a compromise of sorts. John L. McClellan, Arkansas’ other U.S. senator at the time, opted not to ruffle Trimble’s feathers. Then, in late 1965, Arkansas Gov. Orval Faubus released a lengthy statement in support of the national river proposal. Compton was ecstatic, writing Faubus, “Your letter is one of the most splendid statements ever made in the behalf of the preservation and the proper use of our delicately balanced environment.”

The Corps of Engineers had no choice but to back off, given the Governor’s official position. Yet Trimble refused to concede, promising to do all he could to dam the Buffalo. And then in one of the biggest surprises in Arkansas’ 20th-century elections, political newcomer John Paul Hammerschmidt upset Trimble in the general election of 1966, becoming the first Republican sent to Congress from Arkansas in nearly 100 years. No longer worried about getting on the wrong side of Trimble, Fulbright and McClellan sponsored a “national river” bill for the Buffalo in January 1967, and Congressman Hammerschmidt was quick to introduce similar legislation in the U.S. House of Representatives. 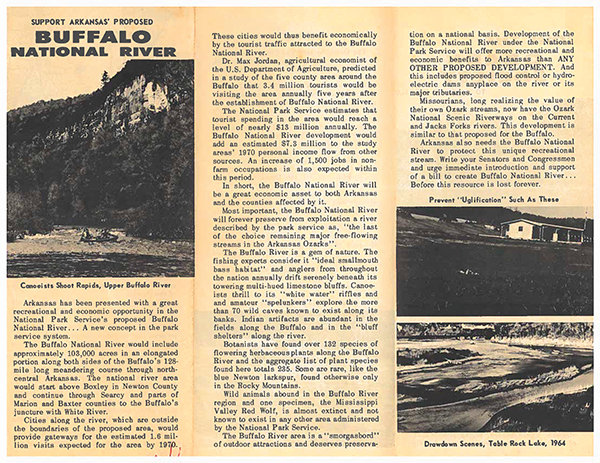 But the BRIA wasn’t done. In a public meeting a few months later in Jasper, James Tudor said, “We aren’t anywhere nearly beaten. These pettifogging politicians have not overwhelmed us.” Tudor’s son, Eddie, had been appointed to the Arkansas Publicity and Parks Commission, the agency that ran the original 2,000-acre Buffalo River State Park. The federal legislation for the Buffalo National River called for state park property to be donated to the National Park Service, but Tudor convinced his fellow commissioners to essentially hold the state park hostage. But wiser heads eventually won the day, and Buffalo River State Park and the much smaller Lost Valley State Park were transferred by the State of Arkansas to the Department of the Interior following President Richard Nixon’s signature on legislation creating the Buffalo National River on March 1, 1972.

So, 3,570 days after Wasson and those 27 fellow conservationists first got together to discuss the formation of the Ozark Society, they were able to celebrate a magnificent but hard-fought victory. And in the half-century since, the group’s members have worked nonstop to protect other free-flowing streams in the state. They were actively involved in the passage of the National Wilderness Acts of 1975 and 1983 that safeguarded key tracts in the Ouachita and Ozark National Forests. 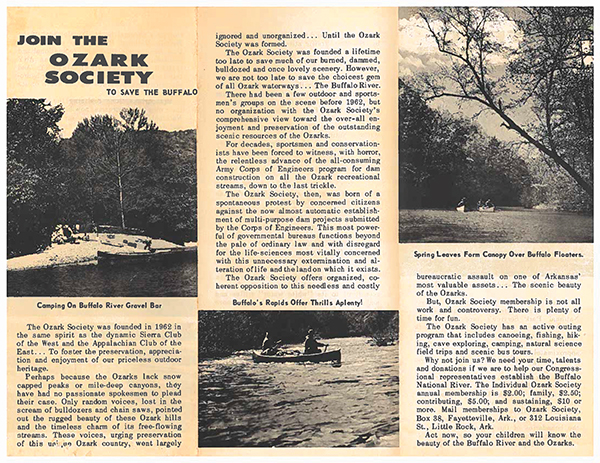 One man who’s been engaged with the Ozark Society for decades is Stewart Noland. Now officially serving as archive chair, Noland got introduced to the society during his days as a Boy Scout.

“The Ozark Society is an organic, homegrown recreation and conservation organization,” Noland says. “It’s intimately involved in the preservation of wilderness areas, unique natural areas and wild and scenic rivers. It provides a rational voice for these important issues.”

David Peterson, now going on his sixth year as president of the Ozark Society, is a former math professor. Even during his days on the University of Central Arkansas faculty, Peterson stored his canoe on top of his car, so he’d be ready to take a float trip when water conditions were favorable. Upon retirement, Peterson decided it was time to give something back to the state and got active with the Ozark Society.

“Recreation is a big deal for our 1,000 members,” Peterson says. “We have some sort of hike two or three times a week.”

Citing the organization’s motto of “Conservation-Education-Recreation,” Peterson notes the value of a series of environmental books published by the Ozark Society Foundation. 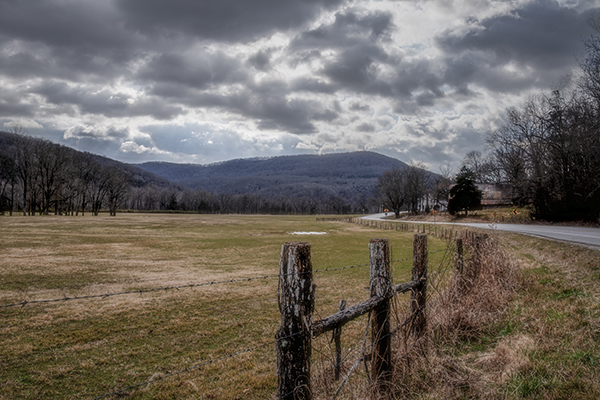 “These regional books are important,” he says, “by helping us to avoid repeating our mistakes.”

Peterson is especially proud of the group’s involvement that led to the closure of a controversial large-scale hog farm on a major tributary of the Buffalo River. Crediting the work of Gov. Asa Hutchinson, Peterson says, “We had as good a conclusion as we could have imagined.”

But despite these successes with the Buffalo River, Peterson wants the Ozark Society to remain vigilant. “It’s possible,” he says, “to love the river to death. If we’re not careful, we can lose the very thing we hold dear.”

Although Wasson continued to participate in Ozark Society events in his younger days, he hasn’t been active in years. When I ask him if he’d ever told his children — now in their mid- to late-60s — about his role in saving the Buffalo River, he chuckles and says, “Nah. They wouldn’t be interested.”