Keeping up with Jenny and Dave Marrs, Stars of Fixer to Fabulous 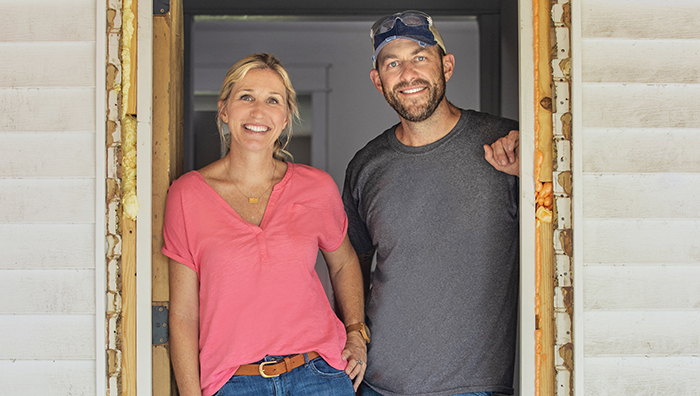 Keeping up with Jenny and Dave Marrs, Stars of Fixer to Fabulous

Arkansas’ favorite HGTV couple is getting close to wrapping up season two of HGTV’s Fixer to Fabulous. Bentonville husband-and-wife Jenny and Dave Marrs have been working hard, overhauling old Northwest Arkansas houses and transforming them into new, beautiful homes while still keeping their original charm. With more than 300 home projects and two successful seasons of their hit show under their belts, we couldn’t wait to get some inside information and ask for their advice on home projects.

AY About You spoke with the couple about how the pandemic has affected their projects, plus some easy tips and tricks for adding organizational spaces now that so many of us are home more.

Have there been any major differences between filming seasons one and two? How has the pandemic changed things this time around?

Dave: This season, [because of the pandemic,] availability of product has been difficult. Lumber, especially, has been really tricky. Trying to get a certain sink, or certain appliances, or certain lighting — you’re very limited on. We’ve almost had to start with what is in stock. Then Jenny decides on the design, we consider the homeowner’s style of the house, and we just try to build around that, based on what we can actually get at the time. So, that’s been a real challenge.

Jenny: I love to work with smaller companies anyway, so l have a lot of little lighting companies that I work with to find things. It’s about getting creative in planning that way, figuring out the plan based on what’s actually available. It’s just an extra challenge. It was a challenge last season anyway, just working with the timelines we’re working on, but this year it’s been a little bit even more challenging. 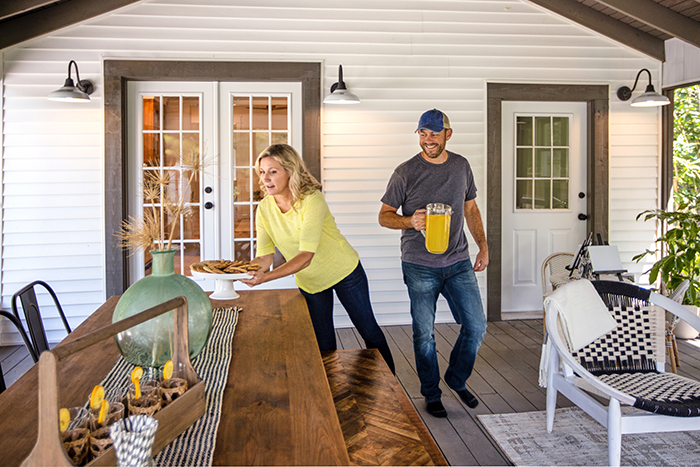 Have you noticed any changes in home-design trends in 2020, particularly because of COVID-19?

Dave: I think the biggest thing we’ve noticed is that a lot of families with kids are needing a built-in learning space for virtual schooling. That’s definitely been something that has been consistent on many episodes.

Jenny: Pretty much if anyone had young kids, they asked for a space that made sense for homeschool. It’s definitely something new because of COVID-19, but we made sure that the spaces were flexible. Even after kids go back to school and everything goes back to normal, these are still spaces they can use later. We’ve provided adults with offices, studies and libraries. We’re actually working on two houses right now, and we have a study in both of those where mom or dad can go to work and close the door. Or they can use it with the family for board games and reading. That definitely has been a much-needed trend. 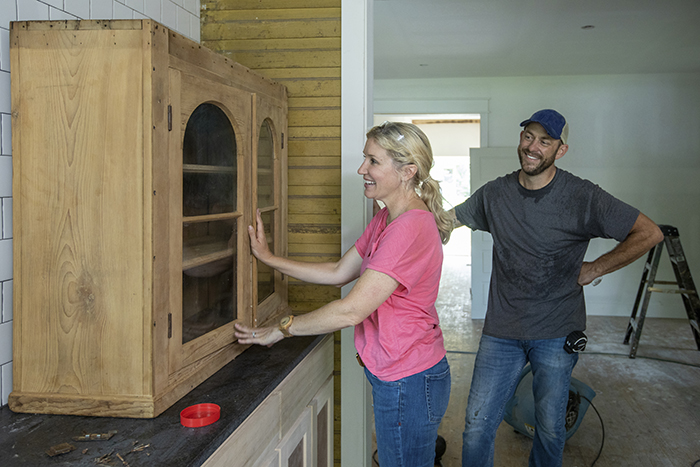 Dave: The other thing which I don’t think is new for us, but it’s something that I think people are realizing is really important, is outdoor space. We’ve been doing a lot of these this season. We both think it’s really important to utilize the outdoors and that’s something that I think people, because they’re home more often, are realizing — “Oh this actually can be an extension of our home and our living space, and we can use it and make it function that way” — whether it’s an outdoor kitchen or an outdoor living room or just another patio. But that’s been something we’ve really done a lot of this season.

We’re about to go into a new year. For people who want a fresh start and want their home to feel more organized and clutter-free, can you give some advice on how we can add storage space to a home?

Dave: I would say we work a lot with older houses so finding any usable space that you wouldn’t typically think of as usable space is key. A prime example in our house is we have a hallway that you just come in through the hallway from the garage to the kitchen. On one side, Jenny has made a whole picture wall; the pictures aren’t mounted on the wall, but they’re on shelves so she can easily change the pictures with the seasons. The opposite wall of that hallway is a mudroom where there’s back-to-back storage. Taking something that was just the hallway and really utilizing both sides of that wall, we try to do things like that. Whether it’s under a staircase or a random corner, maximize all of the space in your house. I think if anyone went and looked through their house, they would find several areas that can be used better. It doesn’t take much money, and it really doesn’t take that much time, and it’s going to add a lot of character to the house. 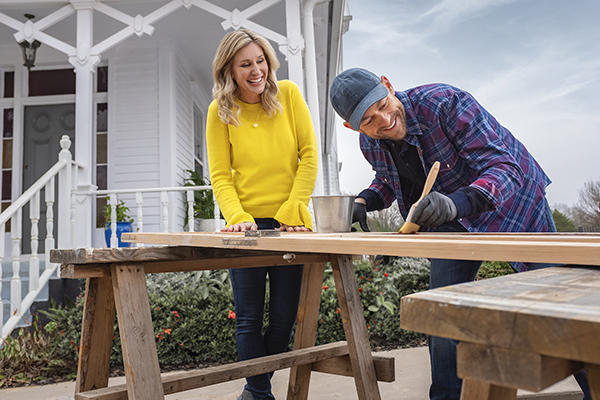 Jenny: I think it goes back to figuring out what you need. Another example is we have a coat closet under the stairs that we don’t really use for coats. We have a mudroom that we use for coats, and we really simplify. The kids have one winter coat, and that’s it. We don’t have a lot of extra stuff, just because I don’t like a lot of extra stuff to have to store. I think you start there and figure out what you really need overall.

We use [our coat closet] for a broom and a mop we hang there, and we have a vacuum, and then it’s also the kids’ craft items. I have a rolling cart that I put in there with all the craft supplies. They can roll it out and do crafts at the kitchen table, and then put them away and just roll it back into the closet. We also have shelves in there for other books and storage and things. So, I think just taking anything and thinking outside-of-the-box a little bit. It’s all about figuring out what works for you and finding a system that works for you. Adding shelves is always great. A rolling cart is always really helpful, especially for kids’ stuff because they can pull that out. If you have a big closet where you put toys, getting the clear fronted drawers works. Rev-a-Shelf has a pretty large variety of organizers in different sizes and styles that can be installed to help with pantry and cabinet organization and you can find them pretty easily — even at Walmart.com. You don’t have to have a big construction project to help with organizing things in the pantry. It’s just a matter of figuring out a system that works for your budget.

Those things are kind of easy to do but if you’re trying to just update a space outside of organization and you don’t have a big budget, I would say the biggest things that I always suggest are paint, first of all. That’s inexpensive, and it really transforms the space. Painting hardware is an easy thing that’s not incredibly expensive, and it makes a huge difference. If you change out all the hardware in your kitchen and you paint, you are going to have a very different looking kitchen. And then, of course, lighting. So, I would say those are the three things that I would recommend if you’re not taking on a huge renovation, and you have a small budget and you want to update your space. Those are three fairly simple D.I.Y. things that anyone can do, and they will make a big difference. 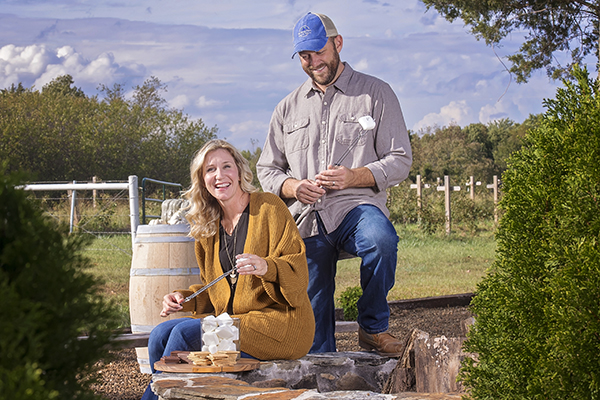 Watch season two of Fixer to Fabulous Tuesday nights at 8 p.m. on HGTV.