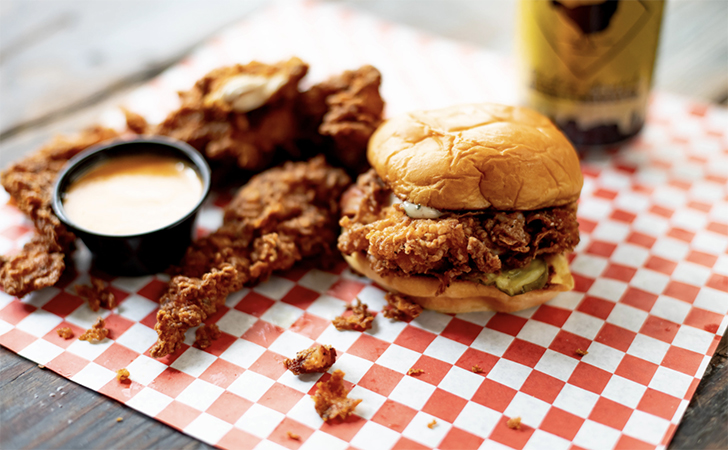 The restauranteurs who made gyros cool via Taziki’s, redefined casually elegant dining with Petit & Keet and Cypress Social and introduced Wendy’s hot ‘n’ juicy hamburgers to Arkansas are at it again.

The Keet family of JTJ Restaurants fame will soon unveil the state’s first Waldo’s Chicken and Beer. The concept is currently under construction on the site of the former Johnny Carino’s at 4221 Warden Road in North Little Rock.

Tommy Keet said the concept fills a niche in the company’s portfolio of offerings, even if it’s not alone in the marketplace.

“There’s a lot of chicken out there and it’s one of the things that my father [Jim] and brother [Jake] and I have joked about for years,” he said. “Taziki’s is such an incredibly hard concept because every morning we do 100 things, made fresh. It’s a scratch–made kitchen. We look at chicken places and we go, ‘Frickin’ chicken; how much easier would our life be if we just did chicken?’”

The running joke turned into inspiration once the partners discovered Waldo’s original Nashville location. Keet said the founder, Mark Waldo, had found a way to elevate the humble yardbird in quality, while still maintaining its casual, quicker-service format.

“Waldo’s is unique in its vision,” Keet said. “It doesn’t just have fried food, the rotisserie chicken in this concept is next level. It’s got incredible sandwiches. It’s got great tenders, eight fantastic sauces, fantastic sides. We’ve got these cheese biscuits that are outstanding. And bone-in fried chicken that, I would say, is unapologetically spiced. It’s not hot chicken, but it’s got a spice component to it.”

The package was so compelling, the veteran restauranteurs decided to go in on it in a major way. Leveraging its longstanding relationship with Fresh Hospitality through which it developed and grew Taziki’s in locations in multiple states, the Arkansas entrepreneurs hit the ground running.

“We were the first licensees of Taziki’s, originally in 2008. My father ended up being the CEO and president of Taziki’s,” Keet said. “We thought Waldo’s Chicken and Beer was another concept that we could help grow. We’re so committed to this we actually bought part of the parent company. We are going to be the franchisor along with Fresh Hospitality and Mark Waldo, the founder.”

JTJ opened its first Waldo’s location last summer in Tulsa before turning its attention to the Natural State. The North Little Rock location, estimated to be around 3,200 square feet and employing 30, is expected to open in summer 2021. Keet said the existing building on the site will be razed to make room for what Keet called a prototype store after which future locations will be styled.

“It’s going to be a fast–casual restaurant, but it will have a full-service bar,” he said. “If you’re seated at the bar,we’re going to have multiple televisions. We’ll have a bar program that I’m going to enlist some help from our incredibly talented bartenders at Petit & Keet to help develop. With the 3,200 square feet and about 650 square feet of patio that’ll be heated and cooled on the front, it will have right at 12 to 14 bar seats and about 75 other seats inside.”

“What we want it to be is something fun, refreshing. If you want to come watcha game, sit with a couple friends at the bar, no problem. If you want to bring your family after church, no problem. That’s kind of what we’re going for. I think it’s just going to be a really fun adventure and we think people are going to really enjoy the food.”

The fact that the Keets are bringing an entirely new concept to Arkansas pales in comparison to the fact that they are opening any new restaurants at all. In a year when COVID-19 have forced many eateries to the curb, unsure if they can survive, JTJ has only accelerated, opening three restaurants since the pandemic.

“It’s a horrible thing to see people that have gone out of business that have been in business a long time,” Keet said. “We have had incredibly patient bankers and other people supporting us during this unprecedented time. In the restaurant business, you have to look to the future. We are going to make it through this crisis and if we position ourselves correctly, we can come out better than we were and offer great opportunities to our loyal employees and our loyal customers.”

“Has it been nerve wracking? Yes. While a lot of people are home not working, we’ve found ourselves working more than we’ve ever worked. But that’s part of what we do. Honestly, if we wanted to say, ‘We have our restaurants, let’s just focus on what we have and not grow,’ we could can do that. It’sjust that our group has the idea that we can be more. We want to move forward because the more we move forward, the more opportunities we can provide to the people that have been with us.”