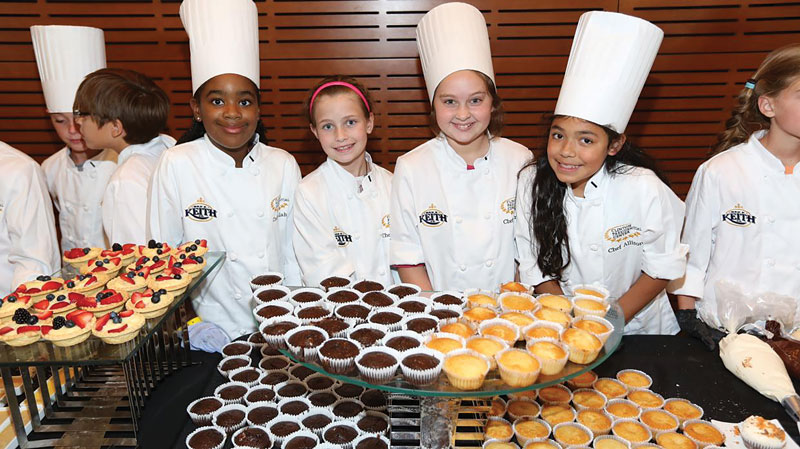 [dropcap]W[/dropcap]hether your child is a prodigal chef or just interested in all things related to baking, a variety of cooking camps around the state offer fun-filled summer sessions for all skill levels.

There’s no shortage of specialty summer camps available to parents looking to provide summer enrichment for their children. One growing trend in the summer camp industry is culinary camps for kids. Whether your child knows his way around the kitchen better than you do or he’s just interested in chowing down on his own culinary creations, there’s something for every skill level.

Younger and younger students are attending culinary camps, and some are semi-professional chefs in their own right. Ten-year-old Savvy Baker, the daughter of AY Publisher Heather Baker, was recently accepted into the exclusive Clinton Foundation Culinary Camp that she has been hoping to attend for several years. Because spots are limited, applications can be competitive, requiring applicants to explain their skills and experience.

“Savvy has been in the kitchen, either making a mess or trying something new since she was three,” says Baker. “Her dad taught her how to make sausage balls when she was four years old and now that’s one of our family traditions for holidays and sporting events.”

Savvy’s goal is to learn how to make more dishes from scratch using natural and organic ingredients. “She wants to master cupcakes and frosting,” says Baker. “But, she is looking forward to the entire experience – getting to go into the kitchens of chefs around the city, visiting different food vendors and learning the skills that will make her a good chef.”

Savvy is excited to begin her journey into the culinary world. She and hundreds of other kids will be embarking on the many cooking camps around Arkansas. The camps have become so popular that most are already filled up for the remainder of the summer.

Ten-year-old Savvy Baker was recently accepted into the exclusive Clinton Foundation Culinary Camp. She has been hoping to attend for several years.

To find out more about the specific offerings, we checked in with a few of the more popular camps in central Arkansas.

“There is a degree of independence that is gained through the ability to cook for yourself,” says Mike Selig, director of food, beverage and events at the Clinton Foundation’s restaurant and catering operation, Forty Two. “It becomes a life skill that these students will carry with them forever.”  Through their years of camp, they start with cardboard knives and progress through all types of cuts and knife skills. Upon completion of the program, they leave with a full knife roll, as well as confidence in their abilities to use these and other tools they receive, which include a rolling pin, sheet pan, high temperature spatula, omelet pan, cutting board, sharpening steel and four years of personalized chef’s jackets.

Throughout the program, students learn about nutrition, self-farming and different kitchens within the community, including: Ben E. Keith, the Statehouse Convention Center and Dugan’s Pub. They get the experience of cooking on live TV on “Good Morning Arkansas,” competitive cooking through cupcake wars, food truck challenges, watermelon carving and salsa contests. They create their own ice cream for the pop-up restaurant through Loblolly Creamery and visit Moss Mountain Farm with P. Allen Smith, where they harvest their own eggs to use in their pop-up restaurant. Kids learn the science behind food with Kevin Delaney of Museum of Discovery and “Tonight Show” fame.

In 2012, Courtney Plyler, an eighth-grader from Murfreesboro, heard about the culinary camp through a family friend. Courtney, who says that she was the kind of child who watched the Food Network instead of the Disney Channel, knew she wanted to be a baker. But her small school, in a very small district, didn’t offer any culinary or baking classes. So every summer, Courtney, her mom and her grandmother would make the two-and-a-half hour trip to Little Rock and stay in a local hotel so Courtney could attend culinary camp.

“Courtney stood out immediately,” says Selig. “Even at a young age, she was always interested – especially in the pastries. The skills came easy to her, she worked hard, and she enjoyed it.”

Courtney attended all four years of high school as a camper. Fast forward a couple of years, and she is now completing her first year as a culinary student at University of Arkansas-Pulaski Technical College Culinary and Hospitality Management Institute in Little Rock. Of course, she has a concentration on baking. She is also an on-call pastry cook at Forty Two. According to her colleagues and mentors, it is clear that she loves what she does, and it shows. She recently competed in the Skills USA challenge at the state level, and won first place and the Gold Medal. She will travel (with her mother and grandmother once again to cheer her on) to Louisville, Kentucky, this month for the national Skills USA competition.

Her goal is to one day own her own bakery. She credits culinary camp for encouraging her to pursue her dreams – her dreams that started in Pike County, Arkansas, as a young future entrepreneur watching the Food Network.

At Pulaski Tech’s culinary institute, aspiring chefs have the option of attending culinary camps, baking camps or cake camps. Culinary campers learn knife skills and basic cooking, baking and pastry techniques in addition to how to prepare a variety of appetizers, soups, sauces, entrées and desserts. Level 1 baking camp covers the basics of baking breads, pastries, cakes and confections, while Level 2 baking camp builds on the techniques covered in Level 1 in addition to the preparation of macaroons, croissants, bonbons, tortes and a variety of plated desserts. Students of the cake camp learn to bake, fill and frost cakes using a variety of designs and techniques.

“Our culinary camps are a great way to explore the culinary profession,” says Pulaski Tech Director of Communications Tracy Courage. “Our young chefs learn their way around a kitchen and we teach them first and foremost how to be safe in the kitchen. They also have the opportunity to work as pastry chefs and sous chefs.”

According to Courage, parents are often thrilled about Youth Chef Camp and their child’s interest in cooking. “They particularly love that our chef instructors teach them not only how to prepare snacks and simple meals but healthy snacks and meals,” says Courage. Youth Chef Camp also introduces the kids to different kinds of foods, such as grains, vegetables and pastas that perhaps they’ve never eaten. “We encourage all the participants to be adventurous and try everything.”

The UA-PTC’s culinary camps are so successful that many students choose to pursue careers in the culinary arts profession. “Many of our college alumni who completed their training at UA-PTC’s Culinary Arts and Hospitality Institute are now professional chefs right here in Central Arkansas. Some are running their own eateries, and many have catering businesses.”

WILDKIDS COOK! AT WILDWOOD PARK FOR THE ARTS

Several years ago, Wildwood Park for the Arts teamed up with Faith Anaya and Little Rock-based cooking school Kids Cook! to provide their very own culinary camp for kids. Campers will receive hands-on training in the kitchen and basic cooking and food preparation skills while exploring various cuisines from around the world. WILDKIDS COOK! includes a field trip to the Historic Arkansas Museum garden and will culminate in a camper-prepared lunch for friends and family.

Wildwood’s culinary camp is ideal for kids ages 8 and up interested in learning new cooking skills and reinforcing learned skills while receiving hands-on training and learning about the farm-to-table process in order to make healthier food choices.

“We are able to meet them at whatever level they come to us,” says Angela Collier, Wildwood’s education curriculum manager. “Kids with higher skills can learn more, and kids with lower skills can learn the foundation of kitchen safety and food preparation. They’re not necessarily all familiar with cooking. Some have attended our culinary camp before or have started cooking at home under the guidance of their families, and others are not as familiar with culinary techniques.”

From 9 a.m. to noon every day, campers focus on a different cuisine from around the world while taking nature hikes and learning about food production and growing methods. Then, they head off to the kitchen for hands-on training with Faith and her assistants. The maximum number of students enrolled in the camp at any given time is 12, so each camper receives one-on-one attention and support. Instructors also spend a portion of the lesson speaking to campers about mindful eating and nutrition and the importance of choosing more non-processed, locally sourced produce to enable them to make their own healthy food choices.