For King & Country Tickets Going on Sale This Friday

Set your alarms for 10 a.m. this Friday. That’s because tickets for the hit Christian band For King & Country concert at Verizon Arena are going on sale.

The Australian band, made up of brothers Joel and Luke Smallbone, will be performing at Verizon Arena on October 6, at 6 p.m. This will be one of the band’s stop on their North American tour promoting burn the ships, their third studio album which was released in 2018.

Luke and Joel formed the band when they were 19 and 21 years old, respectively. They released their debut album in 2012, winning New Artist of the Year at the 2013 Dove Awards. 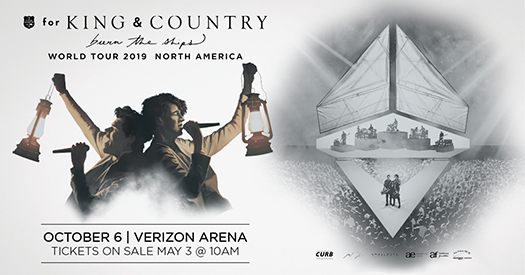 Tickets go on sale Friday, May 3, at 10 a.m. at the Verizon Arena box office or at ticketmaster.com.