Knives Out: Local Food Experts Reveal Their Tools of Choice 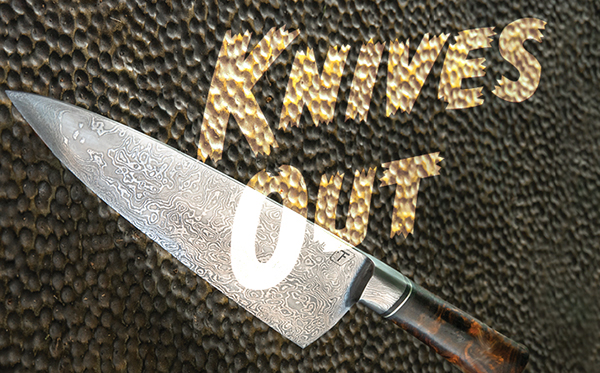 From family heirlooms to those used every day in the kitchen, knives are the centerpiece of experts in the food industry. They share with us their most cherished implements and what makes them so very special. 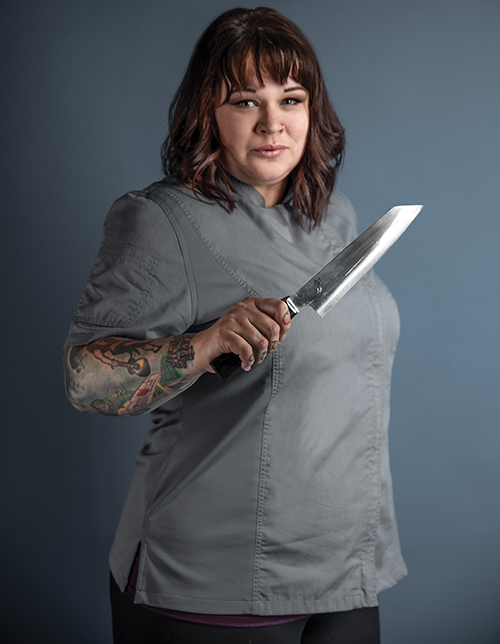 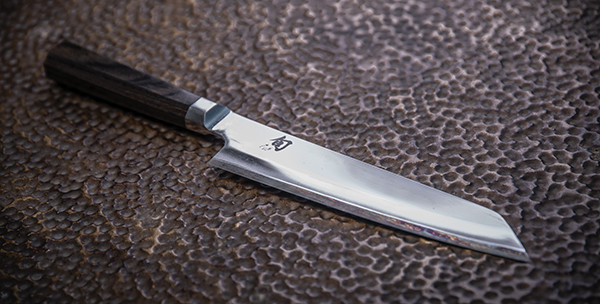 What is the story behind this beauty?

I was given the opportunity a few years ago to private chef in Napa. It was a really great experience for me because we were staying on the original investor of The French Laundry’s vineyard. I was pretty much nerding out on the ingredients I had available and the incredible kitchen, so as a thank you, they took me to the CIA (Culinary Institute of America) in Napa and that’s where I bought the knife. It reminds me of one of the best experiences I’ve had as a chef.

Is there anything special you have to do to help take care of it?

I keep it in a wooden sheath, and it has to be oiled after every wash so it doesn’t rust.

Have you ever let anyone else use the knife or is it your baby?

I’ve only ever let my sous chef, Sammy, use it, and I only use it for special events, private dinners and competitions. It’s definitely my baby. 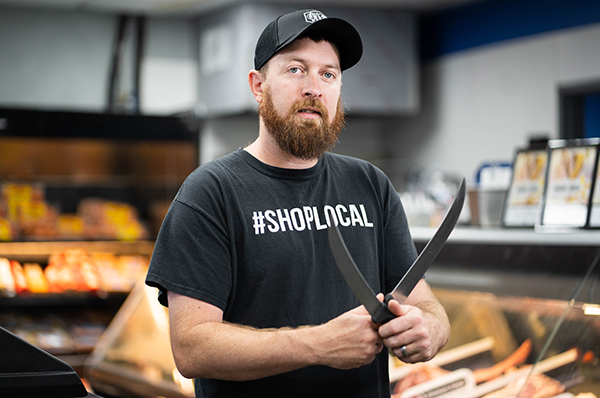 Since you are a butcher, I think a lot of folks are very interested in the knife you chose. Could you tell us a little bit about it?

I primarily use a 6-inch, 8-inch, or 10-inch Victorinox boning knife. They are available, affordable and hold an edge as well as any other I’ve seen. As much as I use them, I may sharpen them once a month. I’ll hit them with the steel a couple times a week and that’s it.

How expensive is the knife?

They are $25-$50 each, depending on the size. Most restaurants  supply stores carry them, or you can order them from Amazon.

Do you use it to cut up those beautiful tomahawk steaks you sell at the meat market?

I use the 10-inch for those big boys. Then the 6 or 8 when it comes time for trimming.

Anything special you do to help maintain the knife?

Just keep them clean, out of liquid and hit them with the steel occasionally. 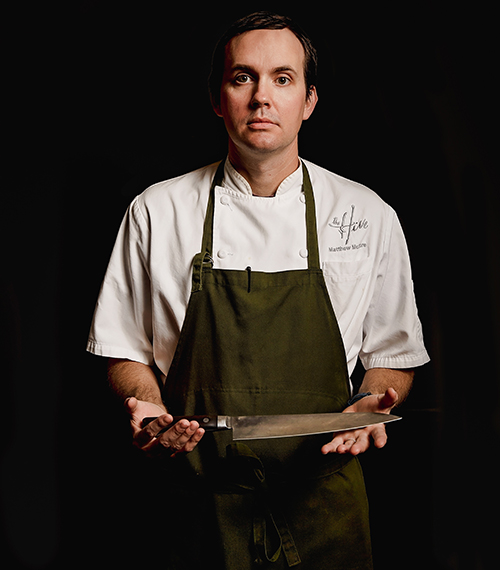 I know it was difficult for you to narrow it down to a single knife for this article. Why did you end up choosing this one?

I fell in love with Japanese carbon steel knives in my early days of cooking in Boston. They are lightweight, extremely sharp and the steel holds an edge for a very long time. This knife has been with me for over a decade. It is my go-to chef’s knife, and I am sure that it will become a family heirloom.

Anything special you do to help maintain the knife?

It is high carbon steel, so it can easily rust. It needs to be cleaned and dried after use. It also is designed in the Japanese style, so it is slightly concave on one side requiring a 90/10 sharpening ratio. I use a water stone to keep it tuned up.

About how often do you have to replace it?

Never! Well, that is my hope. I have had it for well over a decade, and it seems to be wearing very well. The only knives that I have that wear out are the stainless steel ones. Again, I easily see this knife as a family heirloom when I am long gone. I hope that my kids and grandkids are able to use this knife. 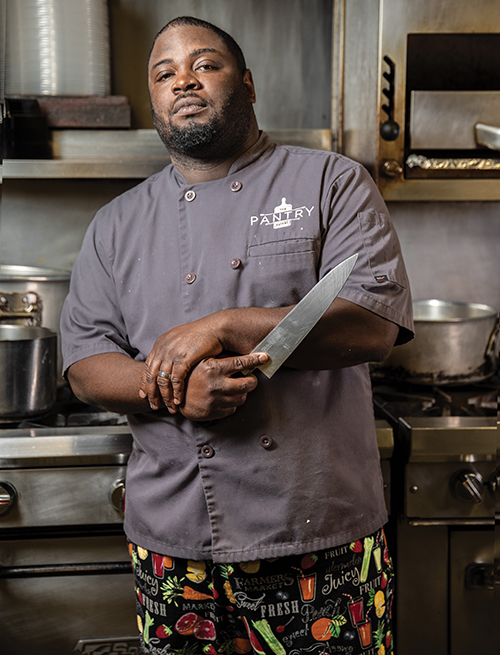 Why is this your knife of choice for this article?

First of all, it takes a beating. It’s also light and easy to sharpen. I am more of a light knife guy, especially if I use it every day.

Does your entire kitchen staff use it, or do other folks have their own knives?

When they’re looking for a very sharp knife, they’ll use mine. For the most part, all we have is house knives. Most people don’t believe in buying their own knives.

How long will the Misono last?

The Misono is a pretty good long-term knife. It’s survived a few drops and accidental runs through the dishwasher. I just re-sharpened it last week, and it keeps a good edge.

About how much does it cost?

They run anywhere from $170 to $200. If I can’t find it on Amazon, I like to go to the Korin website. It’s a company in New York that sells and ships to anywhere in the world. They have an impressive collection of knives. It would be fun for people to go look at their website to get an idea of what any kind of knife could cost. 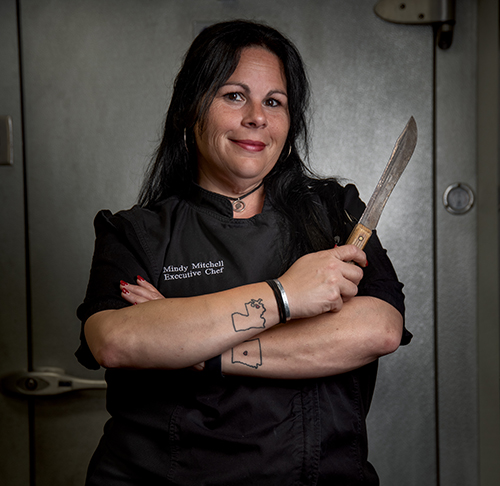 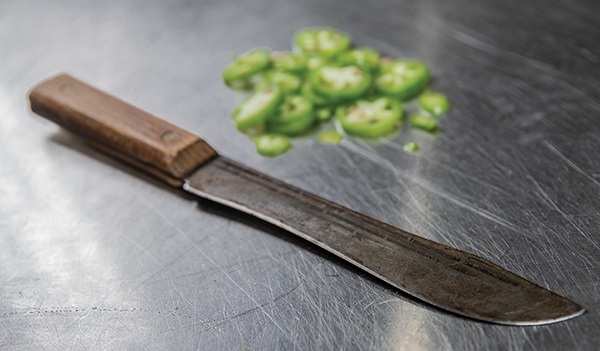 What is the story behind this knife?

Growing up, my dad would come home after work every day and sharpen this knife on a piece of sandpaper tacked inside of a cabinet door. (Side note, this is where I was educated on the safety of a sharp blade.) Then he would start prepping dinner with it. I used to love to watch him slice and dice everything and talk about why he did it the way he did. When I was ready to learn how to cook in my early teens, he let me cut my first of many onions and bell peppers with his knife. It was always special to me, and after I graduated from culinary school, he gave it to me. It’s been in my knife kit since. The blade is so warped from age and wear that I no longer use it, but boy does it bring back memories every time I pull it out and put it in my hands!

Do you think it played a role in inspiring you to become a chef?

It played a role in inspiring my love of food and cooking, which ultimately led to me becoming a chef. So yes, I suppose it unknowingly did. 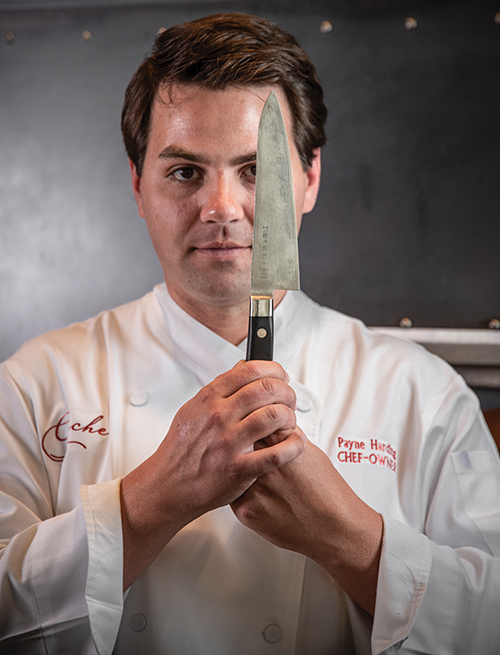 Is this a knife you use on a daily basis at Cache?

I use this knife any time I’m cooking on the line for dinner service at Cache. Once every blue moon, I may go through my knife kits and switch up knives for a different feel, but I always end up coming back to this original chef’s knife.

What characteristics about this knife are so appealing to you?

This particular chef’s knife and high-end Japanese chef knives, in general, are made of high carbon steel. High carbon steel sharpens very easily on a wet stone. Once you have achieved that sharp edge on a Japanese knife, it will stay and hold the edge for a long time. Also, the blade on a Japanese knife is extremely thin, and it slices effortlessly. I think the Japanese lettering is pretty cool as well, and the knife has a certain balance when it is held for chopping and dicing.

Is this a knife you’ve been using for a long time?

I bought this knife the week I was graduating from culinary school. There is this knife shop in Rhinebeck, New York, called Warren Kitchen & Cutlery, and all the students from CIA would tell stories of shopping there. I finally made the trip and bought a knife that would eventually hold much emotional value.

About how often do you need to sharpen it?

I only sharpen the Japanese knife a few times a year on a wet stone when it is slow at the restaurant. That is the beautiful thing about Japanese knives — they stay sharp. However, I do use my steel on a daily/nightly basis for about 10-15 seconds to retain the edge of the blade. 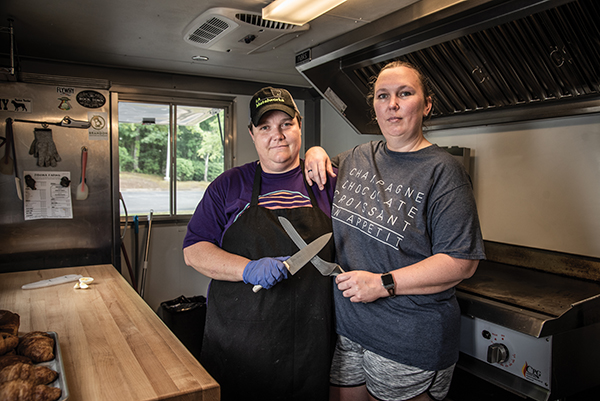 Wendy, why did you choose to highlight this knife?

It’s what I use most often in pastry and bread production. The scalloped, toothlike edge is ideal for cutting through foods with a hard exterior and softer interior, such as breads and pastries. The serrated edge works like a saw; the teeth of the blade catch and rip as the knife smoothly slides through the food, resulting in a neater cut. It’s also great for cutting many fruits and vegetables. I have a couple of them in my drawer, but this one is my favorite because it has a comfortable grip handle.

When did you really fall in love with this knife?

During culinary school. Our baking kits came with a large, straight, 10-inch serrated knife, and I found the smaller offset easier to handle. Offset means the handle isn’t lined up with the blade; the blade is lower than the handle, allowing a full cut before your hand hits the cutting board.

Not at all, and if something happens to it, I can easily replace the knife.

Jill, be honest, is this a better knife than the one Wendy uses?

I’m supposed to say yes because all chefs think their knives are the best, but no, not really. It’s a totally different knife, with a different style and different purpose. Use the right tool for the right job. I love it because it’s multipurpose. I can make it do anything. I can use it as a pairing, boning, slicer — everything. The knife has a super-thin blade, is light, and the handle is smaller. Most importantly, I keep it super sharp.

Be even more honest, are you protective of this knife?

Again, I’m supposed to say yes, but it’s a really inexpensive knife. I only have a few desires: please don’t put it in the dishwasher, don’t bang it on surfaces, and don’t try to chop through bones. 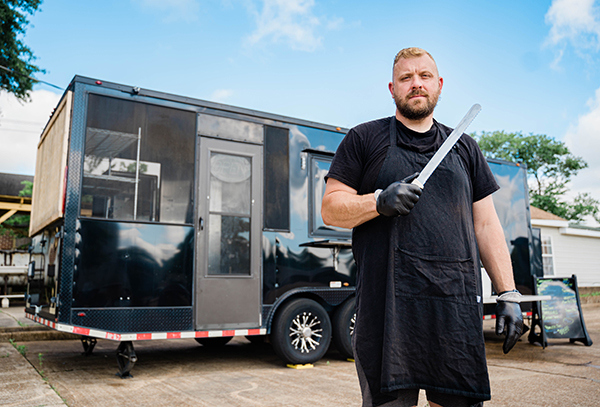 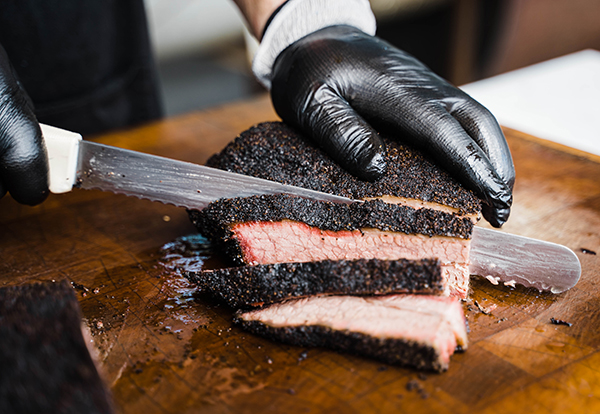 Do you use this knife specifically to slice brisket?

We use this knife to slice brisket, beef ribs, turkey, sausage, spare ribs and loin back ribs.

What characteristics of this knife make it ideal for you to use day-in and day-out?

The knife is great because of its 12-inch blade which makes it easy for long cuts, like for brisket and ribs. The scalloped blade is like a saw and makes it easy to cut through the bark on the meat.

Is it fairly inexpensive?

The best part of this knife is that it’s not too expensive — about $50 dollars. If you take care of it, the knife should be good for a couple years.