With Runway for the Cure happening this month in Little Rock and other major fundraising events occurring across the state this fall, the Susan G. Komen affiliates in Arkansas aim to increase breast cancer awareness, raise money for breast cancer research and provide new avenues to care for underserved demographics.

One in eight women in the United States will be diagnosed with breast cancer in her lifetime. Susan G. Komen’s Bold Goal is to reduce the number of breast cancer deaths by 50 percent by 2026. This is an especially critical goal for the state of Arkansas, which has the sixth-worst breast cancer mortality rate in the nation — and affects African-American women twice as often as white women, according to Susan G. Komen Arkansas. 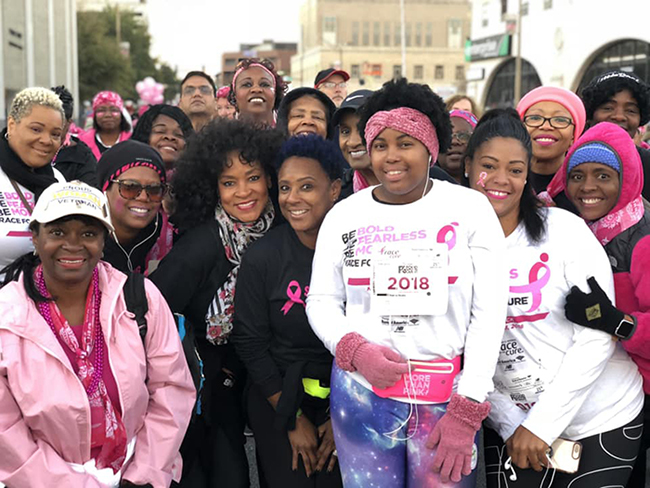 A group of bold and fearless women at the 2018 Race in Little Rock.

“We believe 100 percent that reducing breast cancer [mortality] by 50 percent is entirely possible with the technology and the new research that has provided better and new treatments,” says Amy Treadway, executive director of Komen Arkansas. “The issue is getting women, and men, for that matter, [screened] early enough for the breast cancer to be caught in the early stages. Our mission is to educate people to do that; to start getting their regular mammograms, know their history and then be able to help fund those treatments with the money that we raise in our fundraising events.”

Susan G. Komen is divided regionally into smaller chapters, called “affiliates,” that put on fundraising events tailored to their own area; 75 percent of the funds raised are distributed by each affiliate in its own service area, while the other 25 percent goes into a national pool to fund breast cancer research.

“When the Komen foundation started years ago, we were able to use the money that we raised for local research projects, but that money is just much more impactful to work with the likes of the MD Andersons and those huge researchers that really have substantial projects,” Treadway says.

The Arkansas affiliate’s service area includes 68 counties in Arkansas plus two neighboring Texas counties. The main office is in Little Rock, though it maintains two area offices in Texarkana and Jonesboro. The remaining seven Arkansas counties, plus two counties in Missouri, are served by the Ozarks affiliate, which is headquartered in Springdale.

“It gives us the autonomy to be able to take care of our area,” says Lauren Marquette, executive director of the Ozarks affiliate. “Central Arkansas is very different than Northwest Arkansas. We know our funding and our research and where we need to be putting our money, which may be different than central Arkansas.” 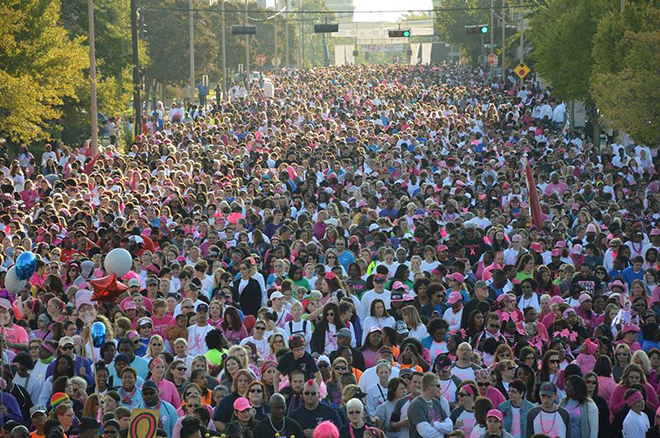 Since 1994, the Komen Arkansas affiliate has raised more than $25 million; $18.2 million went to local breast health and breast cancer awareness projects and $5.5 million went to national research grants. This year, they are hoping to raise $1.8 million through various events and fundraisers, Treadway says.

Three-quarters of that money will be distributed to local programs across Arkansas that educate the public, address critical healthcare needs and reduce barriers that prevent women from getting screened or treated. The programs especially help women who are under or uninsured, unable to pay for prescriptions or who need transportation or childcare services so they can make their appointments, according to Treadway.

“We make sure that every county is addressed in some way or another,” Treadway says. “And in addition to that, every five years we do a community assessment, a community profile in which we interview doctors, patients and other kinds of care providers, as well as look at all of the data of breast cancer in our county areas and pinpoint eight or 10 counties that have the most need. We concentrate on those areas, but every county still has coverage for people outside of those particularly bad counties.”

The first, focused on oral parity, came about in 2017 after a breast cancer patient approached the organization with a problem: she’d been prescribed oral chemotherapy medication, but it would cost her $20,000 despite the fact that she had insurance. After some research, the staff at Komen Ozarks learned that there was a loophole in the existing legislation that only required insurance companies to pay for chemotherapy administered intravenously not for oral chemotherapy. This problem was made worse by the fact that most cutting-edge cancer treatments are developed in an oral form. Now, insurance companies must pay for oral chemotherapy at the same rate as chemotherapy administered through an IV, Marquette says.

The second piece of legislation, passed this year, “prohibits a health plan from requiring a patient with Stage IV advanced metastatic cancer to undergo step therapy if the use of the approved drug is consistent with best practices for the treatment of Stage IV advanced metastatic cancer.” Step therapy, otherwise known as “fail first,” requires a  patient to first try a preferred, often generic, drug prior to receiving coverage for the originally prescribed drug. It’s a way for insurance companies to save money on a more expensive treatment in case a cheaper one will do. Unfortunately, Stage IV metastatic cancer patients do not have time to waste on lesser treatments because of the advanced nature of their disease, Marquette says.

Both of these pieces of legislation benefit all cancer patients statewide, not just those with breast cancer, and they put Arkansas ahead of the game; it was only the sixth state in the nation to pass step therapy legislation, according to Marquette.

In the past few years, the Arkansas affiliate has watched revenue from the Race for the Cure decrease from, at its peak, $2.5 million, to a hopeful $700,000 at this year’s event in October, Treadway says.

“Even though we had over 30,000 people downtown in person, last year only 11,600 actually registered, and that is over a million-dollar revenue loss,” Treadway says. “We think what’s happened is that we’ve lost the connection between that parade… And why it is that we all are coming together on that Saturday morning. We don’t think that people are making the connection that it’s a fundraiser in addition to a celebration of life.”

This year, the new More Than Pink Walk will do away with the race component and require registration to attend the festivities. It’s not an attempt to appear exclusive, just to recoup the revenue loss that happens when people joined in on the fun without donating to the cause, Treadway says.

The new name comes from a shift in organizational messaging that aims to steer away from simple pink ribbons and shirts and toward more intentional engagement.

The Ozarks affiliate met its $850,000 goal for the Rogers More Than Pink Walk in the spring, and they’re hoping to net more increases at their other events this year, Marquette says.

The need for intervention in breast cancer care is so great that even the $1.8 million fundraising goal this year is just a drop in the bucket.

“This past year we received close to $2 million of legitimate requests for funding,” Treadway says. “It has made it extremely difficult for the service providers out there, as our funding to them has been squeezed. It just means fewer people are taken care of. It’s just imperative that we do whatever it takes to grow that revenue again, and we just need everybody’s help to do that.”

With all of the Komen events across the state, from the Ozarks affiliate’s BigWigs fundraiser featuring local celebrities about town in bright pink wigs to the Arkansas affiliate’s Runway for the Cure, a luncheon-meets-fashion-show where the models are all breast cancer survivors, there are ample opportunities for new growth and engagement. Treadway is hopeful about the organization’s future and ability to meet the Bold Goal, but she isn’t afraid to ask her community for help.