Aging can be intimidating, can’t it? With Photoshop and all things photo filters, we never really know if the picture of a friend is the real deal.
I find that I don’t use filters or Photoshop – I have Bruce Sanderson, M.D. at Lasercare Skin Clinic to thank.  I have trusted my face to his artistic hands since 2006. Dr. Sanderson had been our family medical doctor since the 1980s so when I knew that my medical doctor (he’s an internist) would be the very person handling the lasers and the ablative procedures on my skin, I knew I was with the right medical professional.
People often don’t realize that lasers in the wrong hands can mean trouble.  As in permanent, disfiguring trouble. You should want someone who knows physical anatomy extremely well. Dr. Sanderson approaches each patient individually; each is a canvas for him.  He artfully and professionally looks at how the laser can remove brown spots; eradicate redness including rosacea and broken capillaries; and of course, the most magical feat of the laser: tighten the skin by causing a pseudo-injury at the dermis level which produces new collagen in response.
Collagen is the holy grail of skin care. It’s what gives our skin its plumpness in our 20s and 30s. In fact, you stop producing your own collagen in your 30s.  Dr. Sanderson says, “It’s like restoring elasticity in a sprung rubber band.” And when our skin produces new collagen, voila! Skin begins to plump again.
Now let’s move on to Dr. Sanderson’s skill at injectables and fillers.  Dr. Sanderson is very conservative in his approach. He won’t let your lips enter the room before you do.  We all know that person who has obviously had filler.  Yikes. She clearly didn’t go to Dr. Sanderson who does filler that is age-appropriate.  He doesn’t want a 60-year old trying to look like a 25-year old. One technique of his use of fillers is that Dr. Sanderson uses them to make the face more symmetrical.

As far as my personal experiences with Dr. Sanderson, I’m going to list them all.  The first thing I did in 2006 after he opened Lasercare Skin Clinic inside his medical practice in the Doctors Building was have the six laser treatments that he recommends for most people.  The laser tightened my skin and removed any skin imperfections. I can easily go without makeup. I have vitiligo (the skin disorder that causes loss of pigment), and Dr. Sanderson was so cautious that he wouldn’t do even one laser treatment on me until he had spoken with the top person at the laser company to see if vitiligo was a contraindication (fancy word for “will this harm this patient?”)  The answer was “no.” But crazy thing is, I had a consultation with a laser person across town before he began his laser practice (the gal was not a medical doctor but just a human who lasers people-scary now that I know the difference), and she said the vitiligo was no big deal. It is a big deal, and the scarier thing is, she did not even try to find out if vitiligo on her laser was a risk. See where I’m going with this? I would never let anyone else touch my skin with a laser.
Plus, the results from Dr. Sanderson are so impressive. I was at an event recently where many of the city’s top plastic surgeons were in attendance, and I was asked by a couple if Dr. Sanderson was the person responsible for my smooth skin because he has the reputation in central Arkansas of using lasers that bring skin back to the look of when you were much younger. He uses technology that combines two different lasers for a perfect result depending on what your individual needs are.
OK, back to the procedures I have had done: six treatments of the laser in 2006 and now I go back at least once a year for my “12-month, 12,000 mile check-up.”  I have filler done about twice a year. I do whatever he says which includes the hyaluronic fillers and neuromuscular fillers. Thanks to gravity, I do need that appointment every six months.  AY Publisher Heather Baker went to Dr. Sanderson for something else and walked out looking younger!
I have had the Ultherapy treatment and other treatments including the Red Carpet Facial and micro-needling with radio frequency with his daughter, board-certified aesthetician, Natalie Sanderson.  Natalie was trained at a school in Manhattan and has come back to Little Rock to show us how it’s done! Y’all, she is good! The Ultherapy treatment is the one that Christie Brinkley has made famous.  Have you seen her? Good golly, she looks 35. And she’s 65. Sixty. Five. Natalie can also remove your tattoo, unwanted hair, fat! Yes, they have the most affordable fat-reduction method in the city! They have the best prices on SculpSure. She customizes it so you get your money’s worth. 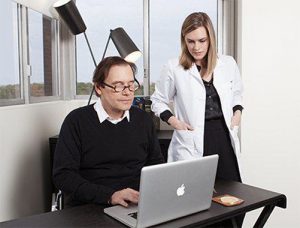 There are a few other procedures Dr. Sanderson has available but won’t do because he doesn’t want to make my vitiligo mad.  Again, he’s a medical doctor first. He cares about you as a patient.
His internal medicine training and experience supersedes his aesthetic expertise. His approach is unmatched in the state of Arkansas and the mid-south.
This is what I tell everyone who stops me and asks about my skin-schedule a free consultation with Dr. Sanderson.  He will talk to you about your goals for your skin and he will give his recommendations. Plus, you pay as you go. You don’t get pressured to buy a package or anything.
Again, I won’t trust my facial skin to anyone else for anti-aging.  He’s that good.