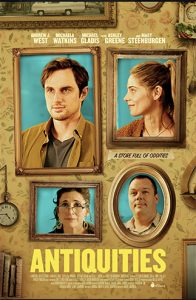 Today is the last chance to catch Arkansas native Daniel Campbell’s debut feature Antiquities in theaters.
It’s showing at the Riverdale 10 Cinema in Little Rock at 1:15, 4:30, 6:45, and 9 p.m. If you’re in Northwest Arkansas, head over to the Skylight Cinema in Bentonville for screenings at 4:05 and 6:40 p.m.
If you can’t make it out tonight to see it on the big screen, you can catch it on-demand. Antiquities is available on a number of on-demand services, including iTunes, Amazon and On Demand.
Antiquities is definitely worth catching on the big screen. The film features a host of Arkansas filmmakers both in front of and behind the camera. Campbell is a talented filmmaker, and I’m looking forward to seeing what he does next.
In case you haven’t heard about it, Antiquities is about a young man named Walt (Andrew J. West) whose father has recently passed away. Walt moves back to his dad’s hometown and takes a job working at an antique mall, and he intends to find out about his dad’s past. He also meets a young woman named Ellie (Ashley Greene) and begins to fall for her. The film charts his search for his father’s (and his own) identity while navigating his relationship with Ellie.
READ MORE: Interview with Daniel Campbell, the film’s director