If you watch local television or follow local stations on social media, you’ve probably heard anchor Laura Monteverdi’s name. She spends her mornings on THV11 sharing news and stories with us. But there was one story she kept quiet for a long time.
Earlier this year, Laura decided it was time to share her story with her Emmy-winning special, Saving a Generation: The New Face of Drug Addiction.

It is not pretty, and it is not a feel-good story. For the longest time, it was something she didn’t talk about. There is no way to sugar coat it. But it is real life. It is all around us. She made it her mission to shed light on the impact that addiction had on her life and the lives of thousands of others. Her mission is to fight it. And I can tell you, she has already made a difference. Hundreds of people reached out to her. People with similar stories, addicts who had been scared to seek help before, recovering addicts, and parents of those who had lost children way too soon. Because of her, many people are seeking treatment, or carrying Narcan with them.

Laura lost her boyfriend Brock to a heroin overdose in September 2015. At the time, he was living thousands of miles away. I still remember that day and my blood running cold when I heard someone sobbing and collapse in the hallway. At the time, I didn’t know her very well, but I knew she didn’t need to be alone. I called one of our coworkers who was closest to her and let her know so she could come to the station. I remember feeling that I obviously had to say something, even though I knew my words would make no difference and might even seem fake.

Months later, I was able to share with her that I had lost many friends to addiction over the years, and she was not alone. 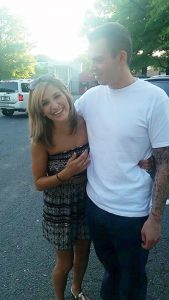 You see, Laura hadn’t really seen the true face of addiction before Brock died. She hadn’t really ever been around addicts, and she hadn’t yet lost someone to the disease. She didn’t know the “signs.” Most people don’t. Everyone thinks, “my friend/boyfriend/parent/sibling wouldn’t do that. They’re not a ‘junkie.’” But she, like me and so many others, was forced to face the sad reality of something that has been swept under the rug for so many years. Now she is acutely aware that addiction does not discriminate. It does not see color, creed or social status.

RELATED: The Human Cost of Addiction

Though it was emotionally trying for her, she came to realize that she needed to share her story to help others and end the stigma of addiction. She knew that she was placed in that situation for a reason. She was and still is determined to make a change.
On Tuesday, I got a text from her saying, “I know you’re at work, but please call me.” Earlier that afternoon, she had been at a yield sign at the corner of Sam Peck and Cantrell after dropping off one of the children that she picks up from school. There was a woman four cars ahead of her at the sign, and though no traffic was coming, her car didn’t move. People started honking, and after a few moments, Laura and a man a few cars ahead got out to check on the woman. As the man opened the woman’s door, her lifeless body fell out onto the ground. Her lips and face were blue, and she was not moving.

With a glance into the vehicle, they saw a needle and a spoon, and it became clear what had happened. Laura quickly called 911 while the Good Samaritan administered CPR, ultimately saving the woman’s life.  I know that image will never leave Laura’s mind. I felt terrible sadness for her, because I know she never wanted to have any idea of what Brock looked like when he died. But that day, she got a glimpse. I wished I could’ve taken her place. But later, I realized she was put there, at that yield sign on a random Tuesday afternoon for a reason.
https://www.facebook.com/lmonteverdi/posts/10156985881231454

That Thursday, Laura was set to speak at the Arkansas Prescription Drug Abuse Prevention Summit. Lately, sharing her story so often was starting to weigh on her, so she planned a speech geared towards her career and great stories she has gotten to cover. But that random Tuesday afternoon changed things. She knew that she had to share that woman’s story. The woman who lived.

It’s easy to forget that Laura is a “local celebrity,” because she is just another twenty-something dog mom like me trying to make it through life. It’s just another reminder how this disease can affect anyone, anywhere.

In this world full of billions of people, she has sparked change. You can feel it here in Little Rock. Sharing her story opened many peoples’ eyes and hopefully that will only continue. If you or anyone you know is struggling with addiction, there is hope and help for you out there.

The woman saw Laura’s post through social media and reached out to Laura. She wrote the following excerpt about her experience and gave Laura permission to share:

“[I] woke up on my side, seeing nothing but a bunch of legs and feet, cars driving by. My first thought was ” this is definitely not good” I heard people talking around me, but couldn’t really decipher yet what they were talking about. I heard someone say “Narcan” and thought “no, please no” but I couldn’t open my mouth to speak. I felt paralyzed. Whoever administered it, I was angry at. It was cold and I didn’t think I needed it. Surely I must have just fallen asleep for a second and they are over-reacting. They sat me up and asked me the usual questions. “who are you, what is your name, your age, what are you doing up here, how much did you use?” They stood me up and walked me to the ambulance. I had never felt so foggy in my life. Just speaking was an act of God in itself. The ambulance attendant asked if I realized that I had just died and I shook my head yes, but was thinking there was no way, I had just passed out. I answered their questions, yes I knew who I was and who the president is, it’s Tuesday, my address, my age. I remember telling them I had to go to work. The attendant strongly suggested I go to the hospital, but I felt like since they had given me the Narcan, what more could they do. The cop asked me, hospital or jail and put me in the back of the car. I began sweating profusely and my head was pounding, the nausea I felt was something I didn’t dream was possible. The attendant came back to the cop car and said I still had the option to go. At this point, I told her I wanted to. This is where I had a problem with what was going on. The cop wasn’t as compassionate as everyone else seemed. He treated me more like a junkie then a person. He replied “of course you wanna go now, you’re in the back of my car.” I told him that had nothing to do with it, that the Narcan had made me feel strange. I asked the ambulance worker what would happen if I went to the hospital and she told me absolutely nothing. So here I was faced with the dilemma.

The cop made it seem like if I chose to go to the hospital, it was just because I was putting off going to jail, that’s exactly how he made it seem. So I sat there and thought, why waste these people time any further and why put on a show of going to the hospital if they aren’t going to do any more for me. It’s just putting off what I’m going to have to do anyways. So even though I felt like I wasn’t even there or making the decision, I told them to take me to jail. I knew it was a misdemeanor and I would be back out in just a few hours. So I got what I asked for. After arriving at Pulaski county jail, the cop informed me that had I chosen to go to the hospital, I wouldn’t have even been charged for the crime. I just sat there in disbelief. After I had changed my mind and considered going, he had made me feel like I couldn’t go and the only reason I was considering it was just so I could put off going to jail, but had I just gone with the ambulance, I wouldn’t be facing this charge. I felt so stupid for not demanding to just take me. I felt like I had been duped out of getting more help. How can you make someone feel like they really don’t have the option to go even though they should have? He laughed on the phone ride up there with someone about what happened to me and about getting “another one of the street.” That’s exactly all I was to him, not a person with hopes and dreams, but another one “a lost cause” I was released at 2 in the morning in the middle of one of the worst parts of little rock on my own with no car, a dead phone, an hour away from home, and nowhere to go. I kept kicking myself for the situation and I still am. I have court tomorrow so I’ll find out what happens from here. I have never gone to treatment because I can’t afford it. Not a real one. I have always done it alone and it never works out our lasts long. People look at me and I hear the same thing “you’re too pretty, too young, what could be so bad that you feel like you have to do that.” I wonder myself too at times. On the ride to the county jail, I cried. Not because of the crime or what had happened, I cried because I wished I would have just died instead. It was so overwhelming and it’s something I have battled for so many years, I just wish it would’ve been over with at the time. Heroin changes the complete make up of your mind. The very demons you are running from get a voice with heroin. They tell you you’re not good enough or worth it, that you are a burden to yourself and society. It’s a very haunting existence. I would not wish it on my worst enemy and I wish I had never been introduced to it in the first place. It is something I will literally have to battle with for the rest of my life.”