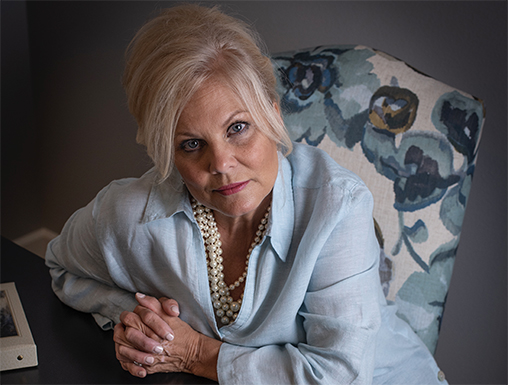 By Dwain Hebda
It’s been seven months since Ebby Steppach’s remains were recovered from a west Little Rock park drainage pipe, not far from where her car was discovered nearly three years prior. With that event, Laurie Jernigan, Ebby’s mother and the firebrand for her daughter’s case, retreated with her family into the process of grieving the loss.
Now, as Ebby’s first posthumous Christmas looms, Jernigan is finding another way to derive some measure of good out of tragedy.
“I do have people message me a lot, who say I heard your story, or this happened in my family,” she says. “I reach out a lot to people I see that’s missing a family member. Not everyone, but when I’m moved to do so, I’ll reach out to families to offer my help and support.”
One such mother is Sabina Tuorto of Pennsylvania. Her daughter, Corinna Slusser, went missing in 2017 after being lured to New York City where it is believed she is trapped in a prostitution ring. Police say the last positive sighting of Slusser was in the early hours of September 20, exiting a slum motel in Queens, New York.
“(Sabina) is alone, she doesn’t have anybody to help her but her sister-in-law who lives in Boston,” Jernigan says. “I offered her support, like, middle-of-the-night support, when there’s no one around. Some of the most important people that I will never meet were people that I could message or messaged me in the middle of the night when you’re crying and you don’t have anyone to talk to. I told her I’ll be that person for her if she ever needs it.”
When Tuorto was set to appear on the Dr. Phil Show to talk about the case, as Jernigan and her husband Michael had done last year to talk about Ebby, she reached out to Laurie for help.
“Sabina and her sister-in-law saw me on Dr. Phil. They just wanted me to be with her and encourage her,” Jernigan says. “(The show) did a very brief update on Ebby, with very limited info, just that we found her and where we found her. They were very sweet.”
READ MORE: I’ll Fly Away
Jernigan said it was a different experience being involved with the show this second go around. Not only was she there in a support capacity, but this time she got to speak with the host directly.
“The first time I went, I didn’t meet him,” she says. “I walked on stage, I hugged him, then we talked, but he never looked at me. He was looking past me at a teleprompter and when we finished, he got up with his wife and walked out. So literally I never met him; didn’t even have eye contact with him.”
“This time was a lot different. He spoke to me and interacted with me. Then when I was leaving, his wife got up and hugged me, so it was a different situation.”
Jernigan said the experience is helping her evaluate where she’s being led in the wake of Ebby’s disappearance and murder. With so many young people falling victim to violent crime and human trafficking it’s impossible to get personally involved with all of them, but she’s trying to keep her heart open for wherever God leads her.
“I don’t know what’s ahead of me, but I do get moved to contact people,” she says, noting she works closely with Tina Stores of Halos Investigations in Mississippi, who worked Ebby’s case. “I’ll just message them to tell them I’m here if you want to talk or if there’s anything I can do.”
“I’m willing to do whatever is put in front of me to do, and I always preface it with if I’m stepping over your boundary or inserting myself where I shouldn’t be, please tell me. I’m just coming from a place of what I’ve been through.”
As for her own day-to-day existence, life has achieved a routine, if not a normalcy, the family hasn’t known in a long time. Jernigan said mostly she has good days and the bad ones generally don’t linger for long. She notes the household does tend to fall into a funk late in any given month (Ebby was discovered May 24), but even that is improving.
“I thought I was going to spread (Ebby’s) ashes but I brought her home instead,” she said. “We’re a lot more at ease to feel like she’s at home with us. That has lifted our spirits a lot.”
“I also know there’s a lot going on with her case; it’s just a waiting game. The FBI is actively working with LRPD. I feel 100 percent confident that this will be solved. I feel that in my heart.”
The Dr. Phil episode featuring the Slusser case airs Dec. 21.
READ MORE: Coming Home