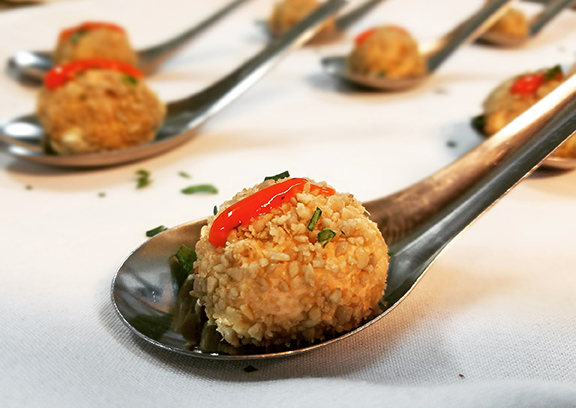 Down a flight of stairs in the basement of the New Orleans Hotel in Eureka Springs is one of the most romantic restaurants in the Arkansas’ Ozarks: Le Stick Nouveau.
If you want to get spicy this Valentine’s Day, this is the place to be. This fine dining establishment has a seven course tasting menu for Valentine’s and the theme is “Spice.” 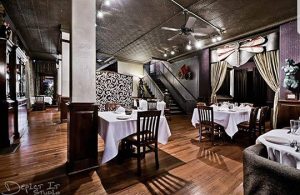 “When we first opened, we just did just one for Valentine’ s Day and it booked immediately. We have to do several dates or our guests will revolt,” says Brandon Cox who owns the restaurant with his wife Donna Fontanello Cox, executive chef.
The name of their venue translates into “The New Stick,” because the owners previously ran the Candlestick Inn in Branson, which was devastated in 2012  by a tornado.
Brandon and Donna (his then girlfriend) ran the popular restaurant in Branson from 2007 until 2012.  In that time, they fell in love and married in their favorite getaway: Eureka Springs. 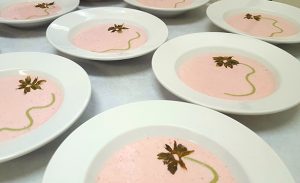 After the loss of the Candlestick Inn, they knew they wanted to open another venue – it’s in their blood. Once they settled with the insurance company, they moved to Eureka Springs. When the space beneath the New Orleans hotel became available, they snagged it and called the French restaurant Le Stick Nouveau as a nod to the past and future.
It became a relatively instant hit and maintains a 4.9 star review rating on Facebook.
Order the beef carpaccio, and it arrives at the table in a glass dome with smoke swirling inside. When the waiter or waitress lifts the glass, the smoke dissipates into the air, revealing thinly sliced carpaccio on the plate. 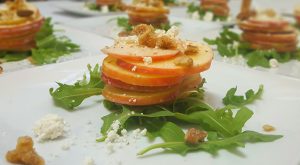 One of best sellers is the lobster Mac n’ cheese pot pie. “I have eaten lobster mac n cheese at different places and lobster pot pie and I wanted to incorporate both of those, so it’s our own creation. We do it with a little bit of white truffle, so it’s hard to stop eating,” Branson says.
The couple has gone through a variety of chefs and now Donna is the executive chef.
The seven course Valentine’s dinner is $76 per person. There are seatings at  5 p.m. and 8 p.m., on Feb. 14 and Feb. 16;  and 7 pm., on Feb 15. 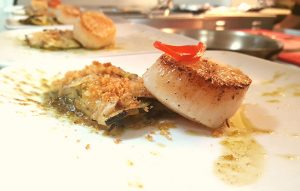 There is an optional wine pairing which has not been priced yet but includes 3-ounce pours with every course except the sorbet.  Here’s a look at the menu:

The wine pairing usually ranges between $35-$50 and each wine is carefully selected.
“It’s the thing that makes what we do here worthwhile. We pick one wine purveyor and they grab their sommelier and about 2 weeks before the wine dinner we will prepare one of each dish, and then we all sit down … with each course and very meticulously choose each one. This is not haphazard – you get several Shiraz and you think it might go well but then you eat the dish and it doesn’t go, so you say ‘let’s try a Syrah.’ It’s takes about four hours to pair the wines. The next day we don’t plan on doing anything,” says Branson.
The Valentine’s Day dinner sells out every year so advance reservations are required. Call to reserve: 479-981-3123. Online: http://www.lestick.com/. Facebook: https://www.facebook.com/lestickeurekasprings
READ MORE: Taking the Classic and Making it Modern: Allsopp & Chapple