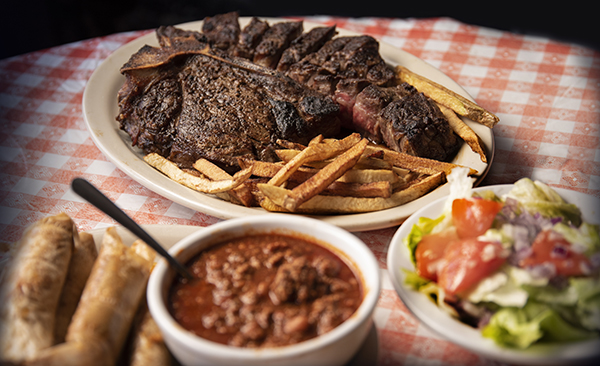 Politicians, athletes, entertainers and entrepreneurs — Arkansas has been home to an impressive number of these folks, many of whom are bona fide legends. There are other legends among us. In our food scene, there are those places that are as familiar and beloved as a grandmama’s hug. Just say the name, no directions needed. There, doors swing open to warm welcomes, plates are piled high with everyone’s favorites and sweet tea just keeps coming your way. It’s the Southern “hello” that never gets old.

And the recipe to the secret sauce of their success? Now the answer to that can be as muddy as the Mississippi. “I’d argue the formula is complex,” agrees Stacy Hurst, Secretary of the Arkansas Department of Parks, Heritage and Tourism. And this lady has the knowledge to back her statement up. In 2016, under her leadership, the Arkansas Food Hall of Fame was created.

“One common denominator is excellent food, of course. A second is great ambiance or a setting that is memorable,” Hurst notes. “These components help create those memories for customers that give a restaurant staying power.” 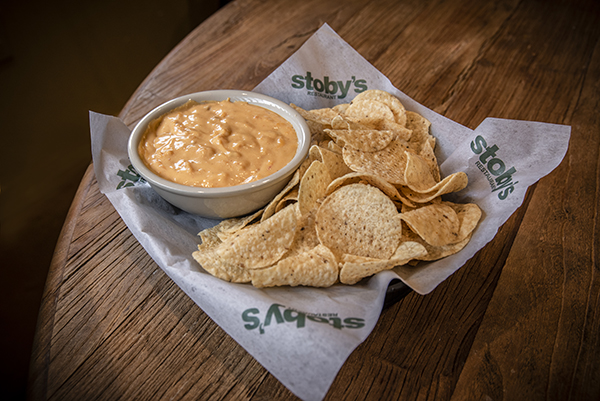 Indeed, for three of our region’s well-known names — Doe’s Eat Place, PattiCakes Bakery and Stoby’s Restaurant — those are definite ingredients in their success. These places have long been the backdrop for much of our lives. Jeff LeMaster, Hurst’s Chief of Communications, celebrated his 18th birthday at Doe’s, a day made particularly memorable as his father told him about the many famous politicians who had sat at those tables. Years after leaving college, other kids then his age are now adult Yelp reviewers still raving and craving about Stoby’s iconic cheese dip. And PattiCakes? Well, a sweet treat from there has been known to soothe multiple generations of cuts, scraps and broken hearts. As Deep South Magazine once wrote, “During tough times, you rely on two things: church and food.” 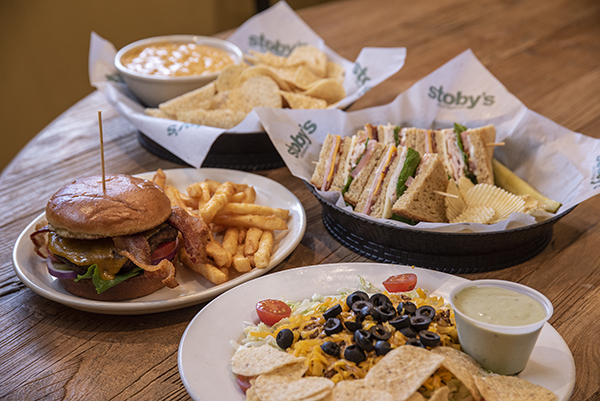 And might we add family? Perhaps this is the elusive ingredient in that secret sauce? It may not be a coincidence that each of these places was started by families who are still very much hands-on. Like all good Southern food, their recipes are infused with the love, techniques and creativity of generations of family and friends. The result is an almost intangible ingredient that brings people back to the table again and again. Chef David of Doe’s was once asked what his secret ingredient was for his famous steaks. His reply? “Love juices.”

Speaking of juices, Doe was a bootlegger — Dominick “Doe” Signa of Greenville, Mississippi, that is. A major flood had put hard times in Doe’s projected path forward. While Doe was out dispersing his spirits, wife Mamie was putting her own spin on a tamale recipe she’d been given. Eventually, things got right, Doe opened his place complete with Mamie’s tamales on the menu. It was quite the understatement to say it was nothing fancy, but no matter, customers then and now don’t give a hoot. 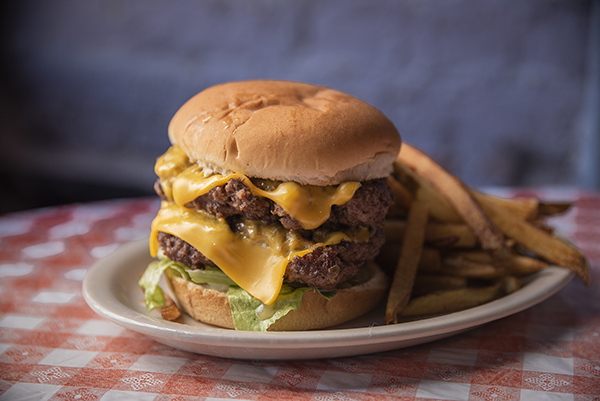 Neither did an Arkansas restaurateur named George Eldridge. This amateur pilot certainly didn’t mind winging it over to Mississippi to keep his taste buds happy. But closer to home would be nice, so Eldridge decided to do take-out of a different variety. He negotiated a deal that allowed him to transport the name and menu to Little Rock. Location, location, they always say, so the business savvy Eldridge plopped his place down in an area as unpretentious as that in the Delta was. 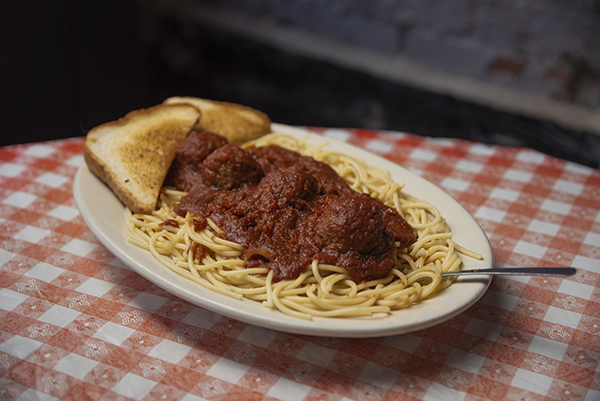 The book Eat Your Way Across the U.S.A. describes Doe’s as “sort of pool-hall chic with a worn linoleum floor, pictures of Delta bluesmen on the wall, and waitresses in blue jean cut-offs and sneakers.” LeMaster’s father was right. It wasn’t long before the politicians, athletes and entertainers started lining up with all the working folks. Over time, the walls had a few more pictures added, especially after famed photographer Annie Lebowitz snapped presidential candidate Bill Clinton at Doe’s while he was being interviewed for Rolling Stone magazine. Not only did Katherine Eldridge, George’s daughter and current Doe’s owner, get an invitation to his subsequent Inaugural Ball, but Chef Lucille Robinson was right there beside her. Bill went to Washington, but back home, Doe’s was winning awards.

The love was getting passed around as plenty were also voting PattiCakes Bakery as their choice for “Best Bakery” as well as “Best Desserts.” By the early 2000s, Patti Stobaugh had been, like Clinton before her, eyeing a new office of sorts. She had a successful corporate career, an empty nest and an itch to bake some cookies — just cookies. OK, well that and maybe a few pies for her husband’s business, Stoby’s. But you know life likes to have its own way with us. Before long there was that feature in Martha Stewart Weddings about the gorgeous seven-foot-tall cake that caterers needed a knife — and ladder! — to cut. Then came more media love from Southern Bride, Style Me Pretty and The Knot.

Every year, it was becoming all too evident to Patti that things had gotten far beyond cookies, not to mention her original mission statement: “To Make Great Food That Was Reminiscent of a Visit to Grandma’s House.” The thing was that 16 years later, Patti was a grandmother herself, albeit one who was still spending almost every weekend at customers’ weddings. Things had to be reined in a bit — after all, family is family. So, it’s official: PattiCakes will hereafter no longer do custom cakes, wedding or otherwise. No need for a severe case of angst — none at all — because on its website are PattiCakes’ “customizable” cakes which are still going to be making show-stopping appearances at all kinds of celebrations, including — whew! — weddings. Just don’t be expecting anything seven-feet tall.

“My favorite thing about having done weddings is, not only do we do their wedding cake, but then their baby shower cakes and then it just becomes a family tradition. We have been doing birthday cakes for some kids since they were born,” Patti says.

PattiCakes and Marie Antoinette might agree on the whole “let them eat cake” thing, but cakes aren’t the only things cooking in that kitchen. It’s actually so much that they’ve just added another location, commercial kitchen sized. Not only does PattiCakes offer its desserts, light lunches and take-away casseroles and dips, but you might say there are some commingled assets going on here. Remember Patti’s original plan — just cookies and maybe some pies for her husband’s business? Well, she’s keeping the pies coming for him, but now it’s homemade ciabatta, croissants and hoagies as well. And the husband? Well, that would be David Stobaugh, owner of a pair of award-winning restaurants, both named Stoby’s. Not only did the Food Network list Stoby’s as one of its “Top Places to Eat,” but David was just honored by the 2022 Arkansas Food Hall of Fame.

But before there was a Mrs. Stobaugh, there was a Mrs. Smith. The latter had a pie shop, and a young Mr. Stobaugh approached her with a business idea he had.  Mrs. Smith had her some ideas of her own, and well, the lady must have been a pretty good negotiator. In short order, Stobaugh had his own sandwich shop and his first employee — one Mrs. Smith, who took him on like family, even leaving him her beloved recipes, many of which are still on the Stoby’s menus. Those sizable Stoby’s menus are like a roadmap to the South — flavors and ingredients from all cultures and regions. He likes to pull ingredients from within Arkansas’ borders too, items such as Petit Jean Meats and Round Mountain Coffee.

And in true Southern fashion, David and his family of employees haven’t stopped tinkering with their ingredients and recipes, creating one which is a legend in its own right. Food historians cite Arkansas as the birthplace of the cheese dip, specifically Hot Springs’ Mexico Chiquito, circa 1935. Rightly, this state hosts the World Cheese Dip Championship as well. But if you’re like most of us and need more than an annual fix, you’ll find many a local who swears by the Stoby’s recipe for cheese dip. The need for cheese is understood there — where else can you get a burger with a side of Cheetos? It is, after all, an unpretentious place, albeit a mecca for foodies from far and near. Not that any of them have gotten bragging rights to any of Stoby’s recipes — be that cheese dip or pie.

The only ingredient Patti is giving out might just be the one to the secret sauce of success. David, she says, “pays attention to the smallest details of what goes into our food and what we serve to the public.” It goes back to that which is innately Southern — treating everyone like they’re family. And at these legendary eateries, it’s a “we feed you like we feed our own” attitude.

So, go on now, be on your way to one of Arkansas’ legendary eateries — where you are sure to get a warm welcome, a plate full of comfort food and sweet tea that just keeps coming. Nothing like a Southern hello to put a smile on your day. 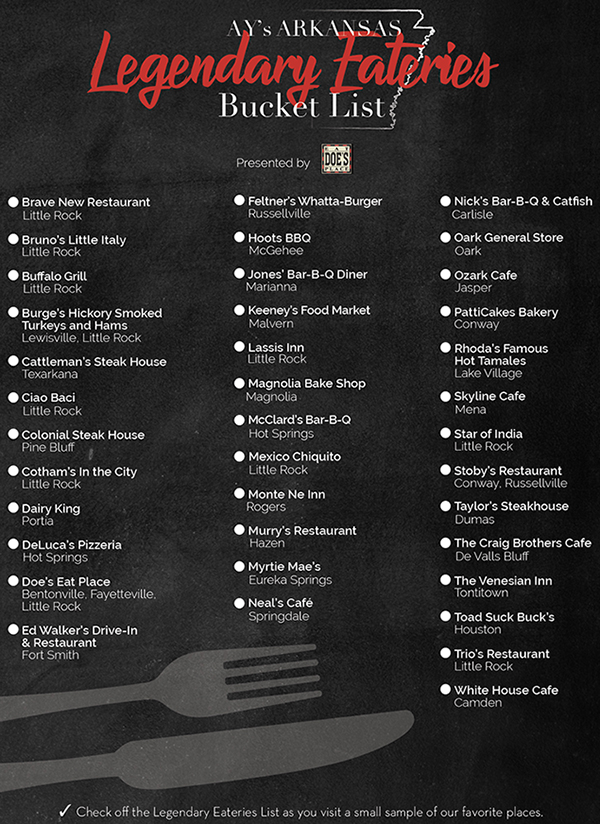