Less Is More: Andrew Gibbs-Dabney Is Exactly What You Envision And Nothing Of What You Expect.

At 32, Andrew Gibbs-Dabney, the founder and CEO of LIVSN sports the predictable tousled hair and easy manner of the new breed of Arkansas outdoorsman: a jock with a kayak, the bro on a bike. There are thousands just like him these days, male and female, all scaling mountains and combing rivers on any given weekend, turned on by fresh air and high on the prospect of adventure.

They are his people and his clientele, this nouveau robuste; individuals who seek, as his company mantra goes, “experiences over stuff.”

That’s the unexpected part of the native Arkansan’s story: As a maker of stuff — outdoor casual clothing to be specific — such minimalist patter borders on blasphemy. But at its soul, LIVSN is cut from a simple, yet decidedly different philosophical cloth. Create better quality products, the thinking goes, thoughtfully engineered to go from outdoors to out on the town, and reduce the redundant clutter of closets coast to coast. 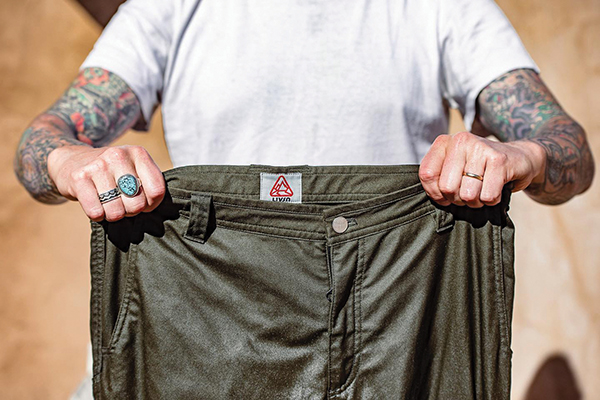 “LIVSN was formed out of this semi long-term effort to simplify what I owned to end up with a core selection of belongings,” Gibbs-Dabney says. “Overconsumption of stuff keeps you from actually living your life. The big part of our brand message is this concept of owning less and living more. That’s been our tagline since the very beginning. I’ve tried to change it several times, and I keep coming back to it. It’s really cool for us.”

“I wanted to make outdoor clothing specifically because outdoor clothing has the potential to be extremely versatile, if you build it the way we wanted to, that is, not overly technical but durable and very functional. So, when it came down to starting LIVSN, it was somewhat a lifestyle design, and also, it was filling this need in the market.”

It all sounds very hippy-trippy on first reading, but the performance of the three-year-old company shows Gibbs-Dabney is onto something. LIVSN’s current collection, as advertised on its website, includes just 10 items, if you count the gift certificate. But among those 10 are items that validate everything the CEO has been talking about.

In 2018, the company launched a Kickstarter campaign for preorders of its fleece top and canvas flex pants, attracting 511 backers who invested $79,000, more than double the $30,000 goal. 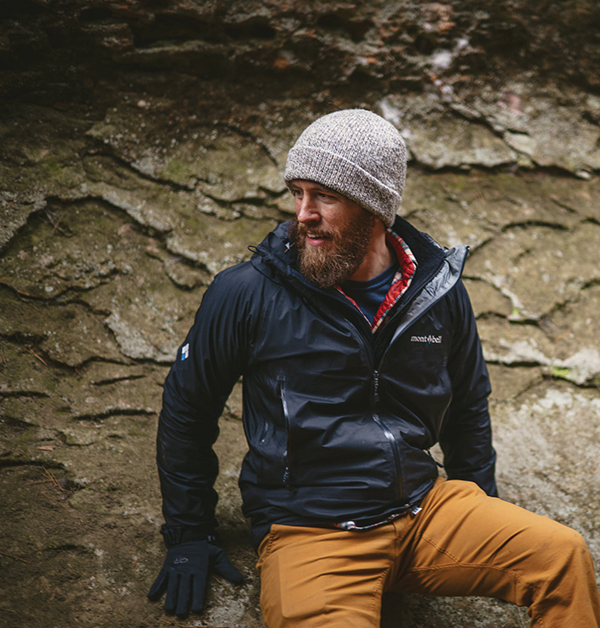 This year, a Kickstarter campaign to launch its do-anything EcoTrek adventure pants, made from ocean buoys, raced past $100,000 in 12 hours and yielded a grand total of more than $500,000 from 3,611 backers — the highest-grossing campaign in Arkansas history. Add to that fawning reviews in national magazines from Forbes and Men’s Journal to Gear Junkie and Outside Magazine, and the Northwest Arkansas firm has become a bona fide sensation among the new breed of outdoor clothiers.

Gibbs-Dabney says achieving this kind of brand following in such a short span of time comes down to sweating the details and staying true to a mission.

“You have to concentrate 100 percent on making the highest-quality product that you can. That was one of our values from the beginning,” he says. “We were going to build a high-quality product that stands on its own before marketing, before branding, before all of these things. We wanted to make sure that when our customer gets it, they’re delighted beyond what they expected.

“As they wear it, they continue to develop a higher level of appreciation for the product because it holds up. They find a functionality that they didn’t know about, and that bond becomes stronger. It really comes almost entirely down to the product, when it comes to getting that sort of following.” 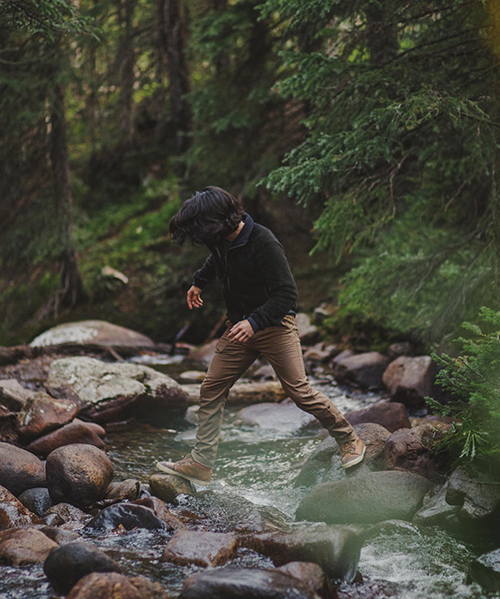 Timing also helps, as the company’s efforts come at a bumper crop period in the outdoor apparel industry. From hiking boots to fleece vests to puffy jackets, outdoor clothing has been on a roll lately. According to Statistica, the worldwide outdoor clothing market value topped $14.2 billion last year, up nearly $2 billion from 2018 and is forecasted to grow another $5.5 billion over that by 2026.

Industry watchers have posited a number of reasons for the segment’s growth even as other apparel categories have floundered. Fashionbeans.com credits increased collaboration between fashion houses and outdoors clothiers, resulting in parkas and hiking boots showing up on runways, boosting exposure.

Last October, Technavio released its latest market research report titled “Global Outdoor Apparel Market 2020-2024,” in which it measured the pandemic’s economic impact on various durable goods segments. Its data shows outdoor clothing sales being among the least affected by COVID-19, thanks to the public’s focus on health and the relative safety of living an active lifestyle outdoors.

Another leading driver for the segment is the tribe mentality many of its top brands engender in their clientele. As nuorder.com reported, the Top 3 must-haves outdoors consumers share include sustainability, innovative design and environmental consciousness. Companies that demonstrate an authentic commitment to these concepts are benefiting most from the current boom, in many cases led by private label brands, reports Technavio. All in all, a near carbon-copy of LIVSN’s game plan.

“Starting out, the first thing I did was write down the values and the mission and what kind of company we were going to be and publish that on our website and on social media,” Gibbs-Dabney says. “The idea being, we’d find people that were attracted to the ‘why’ behind LIVSN before we even put out what LIVSN really was or what we were going to make.

“Step two was getting the products made. First and foremost, functionality, style and fit are the most important things for anybody with a piece of clothing. It doesn’t matter how sustainable something is; if it fits poorly, you won’t wear it. It doesn’t matter how simple it is; if it’s bright orange, you’re never going to wear it, right? All these things are more important than anything.

“After that, I think it’s sustainability and simplifying life and versatility. Those are probably all tied in our customers’ minds as things they find very important because they’re all tied to this idea of spending time outside and living your life.”

Checking these boxes allows LIVSN to tone down its sales pitch in favor of reinforcing its mission statement and values in marketing. Visit its Pipeline blog at livsndesigns.com, and you’ll notice posts on sustainability and stripping down one’s lifestyle tucked among such stories as “How to Find Drinkable Water in the Wild” and “An Honest Look at Hiking Naked.” The hard sell may be absent, but brand reinforcement, to varying degrees of subtlety, is a critical and ongoing part of the company’s strategy.

“You do have to do marketing, you have to tell your brand’s story, you have to explain why the product is better, and you have to really give your customers the words,” Gibbs-Dabney says. “It’s not a given for people to repeat what you want them to repeat. If you give 10 people the same pair of pants with nothing written about it or no kind of prompt, they’re going to tell their friends 10 different things.

“But, if you are effectively communicating what the features are, why they’re better and that they’re more sustainable, and they end up liking them, then they have the words to tell other people. That’s where marketing meets product development. They really have to work together that way.”

For as new age as the company’s funding and marketing models are, Gibbs-Dabney is an old soul when it comes to distribution. LIVSN products are in about 70 retailers in the region with plans to expand the brick-and-mortar presence. 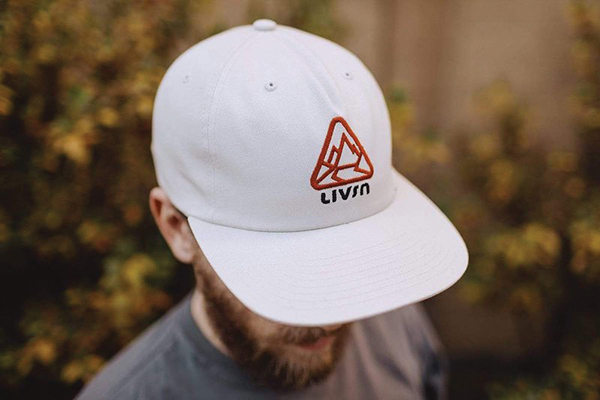 “One thing I don’t see going away, that I think everybody loves to see, is in-person retail done well,” he says. “Retail’s changing, but I do think there’s always going to be a place for going to a physical store and seeing a curated selection of products that were chosen by a thoughtful merchant and displayed in a certain way.

“That experience is going to stay around, hopefully, in a more thoughtful and customer-centered package than it was in the ’90s and 2000s when everything went big box and impersonal. Part of the experience of living is buying things that you need by finding something you support and then buying from them. We’ve put a lot of time and thought into what that experience looks like — smooth, transparent, fast and aesthetically pleasing. It should be easy to support the brands that you love.”

LIVSN is Gibbs-Dabney’s second go-around with outdoor apparel start-ups and his first built from the ground up. He cut his teeth with seminal Arkansas brand Fayettechill for which he went from warehouse worker to COO and CFO during his tenure, learning the finer points of operational efficiency and the value of pacing growth.

For now, LIVSN’s major challenge is expanding the product line and keeping up with demand. Gibbs-Dabney admits to being overdue for a women’s version of LIVSN products with the first women’s pants due out this fall. But, he says, the deliberate pace by which other new units will be introduced is by design.

“I’ve learned over the years that complexity creates problems. So, we see ourselves launching between three and five new items every year,” he says. “That’s very slow in this industry, and our retailers are fine with that, as opposed to launching an apparel brand with dozens of products, each one needing its own marketing, its own quality controls, its own operations, its own inventory and financing.

“We went into this saying that we’re going to build a very small amount of product to launch. That way, we can put our limited resources into making them as high-quality as possible, making sure that the story is getting told effectively and, once that story is out there, gaining feedback we can incorporate as product improvement. That’s not an easy thing to do when you have too much stuff.”

The name LIVSN sounds like it was contrived to suggest what you do in the company’s products. In fact, it is derived from the Swedish word “livsnjutare,” roughly translated, “one who loves life deeply; an enjoyer of life.” It’s a suitably noble concept around which to build a brand, Gibbs-Dabney notes, adding his hopes for the venture are less about world domination than global improvement.

“What I hope we contribute to the marketplace is a reduction in branded crap; non-differentiated products that are cheaply built for the lowest possible cost, with no respect for the environment, being sold purely because they have a brand attached to them,” he says. “You can use the most sustainable materials in the world, but if your product is low-quality and doesn’t have any merit to exist other than the fact it has a brand associated with it, that drives waste and overconsumption and everything else. Hopefully, that’s on its way out.

“We may accelerate, as we’re able to keep the scale and give the appropriate level of design and quality control. But for now, we’re small, and we’re going to keep the product expansion slow and steady and try to maintain a very high degree of quality while we do it.”