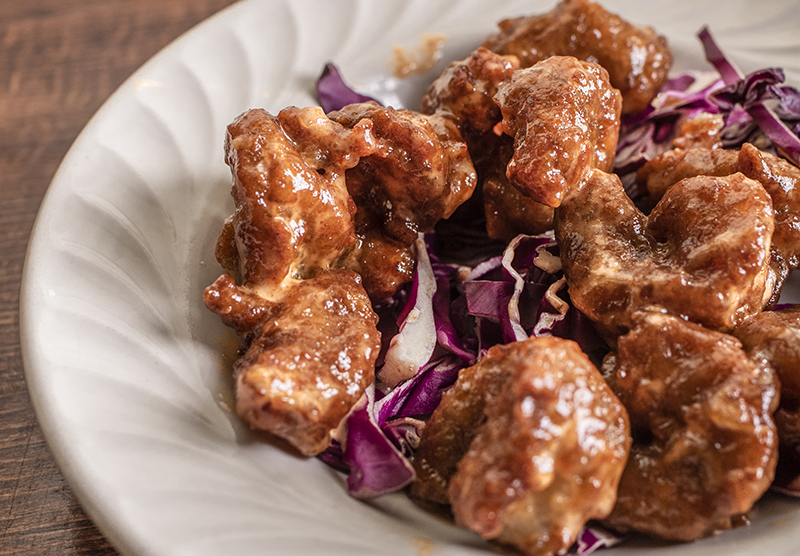 The genial owner of Mike’s Place in Conway, Coats grew up in south Louisiana and started cooking at the age of 14 in a little local grocery store. Years later, when compiling the menu for the Conway restaurant, fried green tomatoes didn’t initially seem to fit the casually elegant atmosphere.

“I was shocked when we first put fried green tomatoes on our menu. I hadn’t seen those anywhere else before, and I wondered if they’d do well,” he says. “It’s my number-one seller. Southern Living voted them the best in Arkansas, so we sell a lot of them.”

The appetizer is so good — along with the equally stellar Shrimp Brantley — that to even think about moving either off the menu is pure unadulterated blasphemy. There’s just no other word for it.

“Over the years, people get used to eating a certain thing and if your sales are up enough, you almost can’t take it off,” Coats says. “Fried green tomatoes and the shrimp — we can’t ever move those around.” 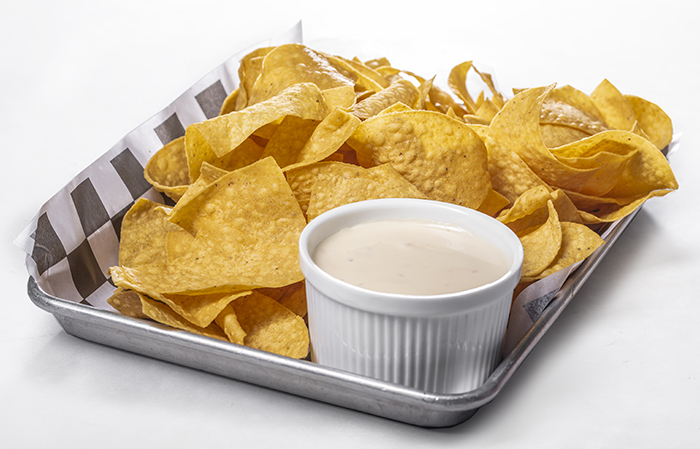 If it seems a stretch to have a bucket list of appetizers, you haven’t eaten the right ones. Sure, there are plenty of non-memorable meal-starters out there, stuff you know has been nuked in the kitchen and served under a cute name. That’s not the kind of thing we’re talking about.

We’re talking about the truly delicious, expertly made and freshly prepared. The kinds of dishes that you could — and, Coats says, many often do — turn into a meal unto themselves.

But more than that, appetizers are meant to prepare one’s spirit as well as one’s palate for the fast-disappearing art of the meal.

“Appetizers give people a chance to break down and talk before their meal,” Coats says. “It’s a homey deal, because you’re passing it between each other. I think people like that time to calm down a moment before they get into the meal. It’s contact.” 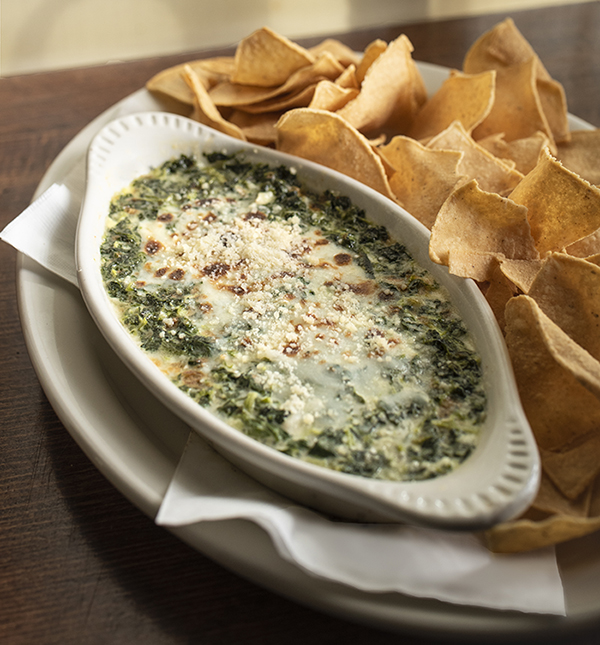 Appetizers are the very epitome of the phrase “more than meets the eye.” There are many terms to describe a meal precursor — finger food, sample, lagniappe, aperitif, hors d’oeuvre, antipasto, starter, canapé — and most of them we use interchangeably and incorrectly.

For example, an hors d’oeuvre is served before (and separately from) the meal while an appetizer is served to signal the start of the meal. Specifically, a canapé is a piece of bread or cracker with a savory topping served during cocktail hour. An aperitif is not a food, but a pre-meal beverage, alcoholic and dry, meant to stimulate the appetite. And a lagniappe isn’t specifically a food item either, but translates as a gift or bonus given to the customer.

Arcane differences? Perhaps. But I don’t make the rules, people, I merely point them out. If you want to talk and host dinner parties like a caveman, that’s on you.

In modern times, of course, the appetizer has morphed considerably. Your typical bar menu is largely, if not exclusively, appetizers — things like nachos, mozzarella sticks and sliders. However, a new breed of bars is upholding the letter and spirit of the dish with their innovative and quality fare.

North Bar in North Little Rock is one such establishment, walking and swimming like a tavern but quacking like a food-forward establishment that blurs the culinary lines between itself and its bar brethren.

“While we were working on a bar menu, we knew we didn’t want anything straight out of the box,” says Snee Dismang, co-owner. “I think the secret to our appetizers is, we focus on things that are tasty, quick to get out of the kitchen and different.”

Nowhere on North Bar’s starters lineup do these elements come together more completely than the fried Brussels sprouts. You heard me.

“It’s three simple ingredients on those flash-fried Brussels sprouts: adding honey, a little bit of sea salt and then some Parmesan cheese. That’s it,” Dismang says. “Even folks that don’t like Brussels sprouts have just changed their ways.

“Myself, for instance, the Brussels sprouts were a no-go with me. My husband tried to make it for me and I was like, no way. But after I tried it, I changed my mind completely, and I love them now.”

Believe it or not, Brussels sprouts represent about the midpoint of adventuresome eating at North Bar. To the tamer left side of the scale, you’ll find cheese dip and fresh, hand-breaded mushrooms; on the more daring right, chicken livers, chicken gizzards and prairie oysters, respectively. If you don’t know what that last item is, I won’t spoil the surprise except to say if you’re eating them raw on the half shell, you’re doing it wrong.

While the Athenians were known to serve what we would call appetizers, the trend didn’t really catch on because they failed to follow it up with a larger meal, resulting in hungry, unsatiated dinner guests. The dish can trace firmer connections to Russia, China and Scandinavia, depending on who you talk to, but it’s pretty well accepted the French perfected finger foods, as well as coined the very terms hors d’oeuvre and canapé.

In the United States, appetizers became a utility, particularly during Prohibition. PBS reports speakeasies would routinely provide small bites of easy-to-handle food to patrons to help mask their inebriation and therefore reduce attention to the establishment upon leaving. The same practice was adopted in private household cocktail parties, a tradition that remains to this day.

As with a lot of things, some corners of American culinaria, mostly chain restaurants, have taken this noble concept and turned it into something grotesque. This gives sites like Eatthis.com plenty of fodder for its Unhealthiest Lists and generally screws up life for the rest of us. I’m no food prude, mind you, but you have to admit when last year’s heavyweight champion — a mutant slab of Cheesecake Factory nachos — comes in at 2,900 calories, 3,900 mg (nearly 2 teaspoons) of sodium and a biscuit under 200 grams of fat, it’s time to think on our sins.

Three-course meals masquerading as a sampler plate are rapidly getting out of control to the detriment of society. RTS.com estimates 80 billion pounds of food is thrown away in the U.S. each year, and I’d wager a good chunk of that are deep-fried onion petals and half orders of artichoke dip.

Yeah, bigger is usually better, but we need to stop looking at appetizers like a challenge to our personhood. Helpful tip: If the plate it arrives on is bigger than your steering wheel, or you fall asleep during your entrée, you’ve probably gone off the appetizer rails.

In the end, it’s all about proportion. Done right, the little tidbit should not overshadow the rest of your meal, like something in the right-hand rearview mirror that appears small until it runs you over. Or, as my ol’ Grandpa used to say, “Don’t let your eyes be bigger than your stomach.” Wise words, indeed. 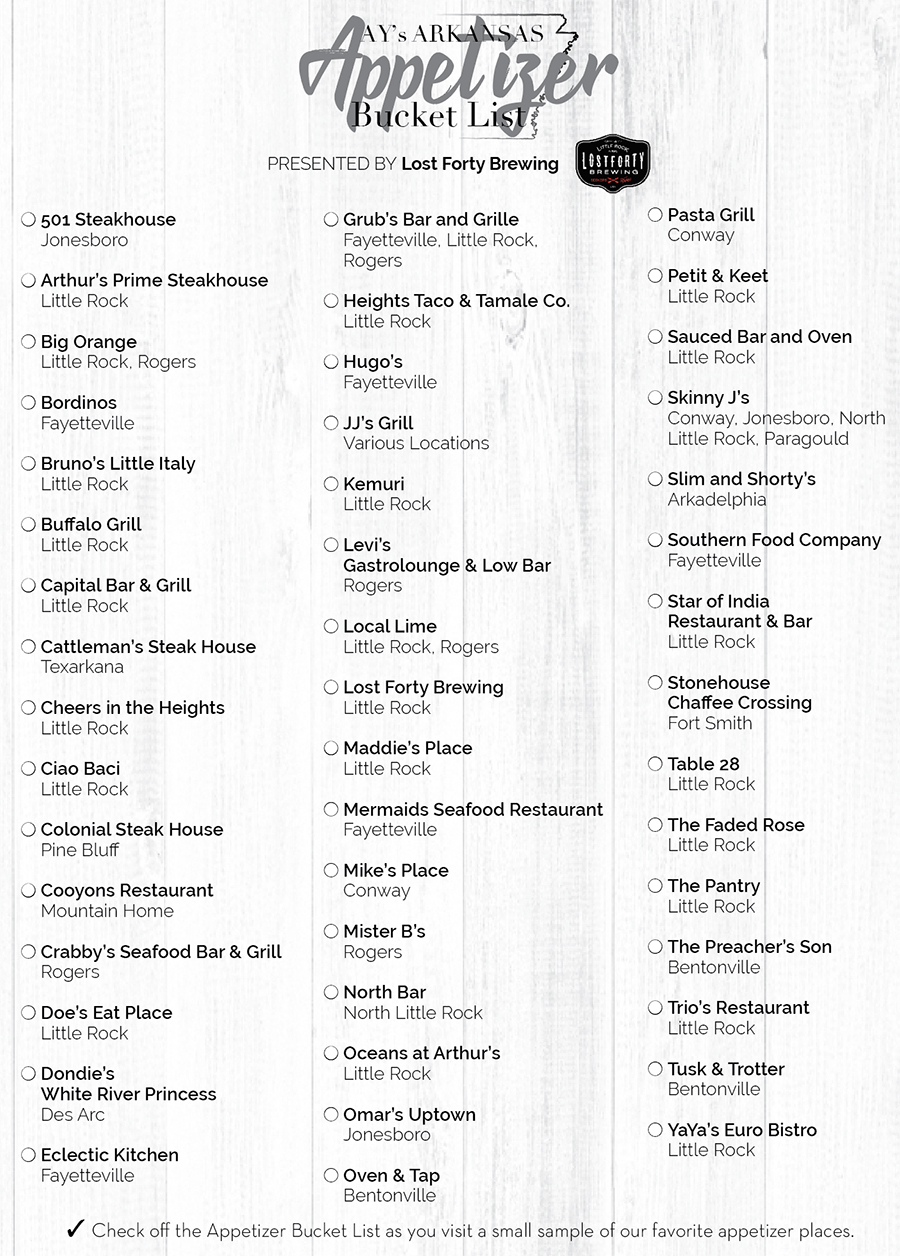