Lessons From a Cape 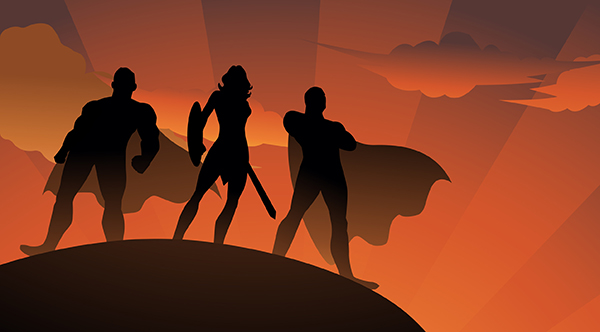 Lessons From a Cape

Martin Scorsese caused quite a riff in the film world when he said that superhero movies were not “cinema” and that in them, “Nothing is at risk.”

He’s wrong; let’s just get that out of the way. But it’s not easy to just say that of one of the best filmmakers in history. And then, I suppose, he’s also right. It’s complicated. I wouldn’t dare compare something like Iron Man to a masterpiece like No Country for Old Men, but I would argue that superhero flicks can be necessary, instrumental and, at times, better for the mind than “art” from an auteur.

Take Batman, for example — specifically, in most comic iterations and in Christopher Nolan’s film trilogy. He’s a person with no definitive superpowers and whose only real claim to fame is his surname — and that his parents were murdered in front of him when he was just a boy. He is forever burdened by a toxic revenge syndrome, paranoia and untreated grief. Bruce, er, Batman, more than likely suffers from PTSD, depression and who knows what else.

He’s flawed — deeply. For the most part, he’s found a way to channel his rage into doing good, but he also fails because of many of the aforementioned ailments. He fails when Robin dies in A Death in the Family; he fails when Bane takes over Gotham in The Dark Knight Rises. And, every time, he rises from the ashes of failure and devastating loss to find a way to persevere, to endure — to live. When I was younger, Batman taught me that it’s OK to be imperfect and damaged; we all are, so much so that even he is. From him, we learned that “a hero can be anyone,” and that “it’s not who we are underneath, but what we do that defines us.”

As a new father, lessons like these have an even greater weight now. The desire to be the right man for the job, to do right by my boy, is a desire unlike any I’ve ever felt. Among those thoughts, amid a mind laden with anxiety, is the fear of failure. But I find real solace in knowing that when (not if) I do stumble along my son’s journey, I can lean on my old friend in Batman. At a pivotal moment, the caped crusader can help me pass on the lessons that I might lack the eloquence to adequately do alone. Or, even better, when my 18-month-old eventually becomes an 18-year-old with a know-it-all attitude who’s outgrown lame lessons from Dad, I can simply suggest a movie night with the much cooler Batman and trust he finds resonance.

Deep talks about life and mental health can be awkward with adolescents; superhero movies, when chosen wisely, can break the ice and help families get past that first wall.

COVID-19 has caused an unprecedented amount of strife in all varieties. But, we should not forfeit the opportunity to learn from this time, no matter how dark the shadows have become. Mental health struggles in every age group are on the rise, but declining is the stigma that used to surround the topic. Let’s not take this victory, however small, for granted.

I thought a lot about loss — that of life, that of normalcy — when watching Marvel’s WandaVision earlier this year. (Spoilers ahead.) It’s a TV show built around a foundation of grief under the guise of “superheroes.”

It follows the characters Wanda Maximoff and Vision, who are in love. They live a literal sitcom life of happily-ever-after through the first few episodes. The only problem is: Vision is dead. He was killed right in front of Wanda in Avengers: Infinity War. As it turns out, her festered mental health afflictions caused Wanda to use her magic to put a Band-Aid on her problems. She accidentally creates a fantasy world in which he is alive, and they are together. However, she finds out that this “fantasy” is based in reality, and she has essentially taken an entire town hostage, causing pain and suffering to innocent civilians while she attempted to mask her own.

The series’ resolution forces Wanda to say goodbye to this facade, which also means saying goodbye to Vision and their children. She’ll be alone again. Within this climax came one of the most beautiful scenes I’ve ever seen.

Wanda: “It’s just like this wave washing over me again and again. It knocks me down, and when I try to stand up, it just comes for me again. … It’s just gonna drown me.”

Vision: “Because it can’t be all sorrow, can it? … What is grief if not love persevering?”

Life, at least while we are on this Earth, can be riddled with anguish, heartache and tribulation. But there is no pain without pleasure, no sorrow without joy and no grief without love. As you go forward, don’t be afraid to find lessons like this — for the whole family — in unlikely places.

And remember that it’s OK to not be OK. Even superheroes need someone to lean on from time to time.

If you or someone you know needs help — no matter how big or small — please utilize the resource guide here.