What happens when two dining powerhouses join forces? When it’s the legendary Louis Petit of Jacques and Suzanne, and the formidable Jim Keet of Taziki’s and 100 other restaurants, it’s the realization of a shared dream—Petit & Keet Bar and Grill.

[dropcap]L[/dropcap]ouis Petit defined fine dining for Arkansans with the debut of the legendary Jacques and Suzanne more than 40 years ago. The restaurant was located atop what is now the Regions Bank Building in downtown Little Rock.

While Petit’s experience was associated with fine dining, Jim Keet’s foodie pedigree spans a wide berth of states and dining options, from Steak & Ale to fast food like Wendy’s and Kentucky Fried Chicken, to family buffet and white tablecloth dining across several states, including the popular Taziki’s restaurants.

Petit and Keet are longtime friends. Now with their adult kids on board in the business, and as culinary partners, they are introducing Arkansas to their own style of polished casual dining.

“Use your southern accent,” Keet said jokingly to Petit. In compliance with the request and with his ‘southern’ French accent still evident, Petit stated, “I’m so happy to be home. Even though I’m not here, Little Rock remains home for me. This is where it all started.”

‘It’ is the legendary Jacque and Suzanne restaurant he opened in 1975. The definition of upscale dining, the restaurant was considered to be the state’s first fine dining option. For many Arkansans, it was an introduction to delicacies such as caviar and escargot as menu staples. The restaurant garnered a much-coveted four-star rating in the Mobile Guide.

Petit closed Jacques and Suzanne in 1986, to the dismay of loyal diners. And although there are many who miss the cuisine of the popular restaurant, Petit and Keet recognize the need to adjust with the public’s current dining tastes. “We can’t do Jacques and Suzanne again,” stated Petit. “It was wonderful at the time, but it’s gone. I understand, people are not waiting two hours for dinner to be prepared. It’s now considered insulting instead of preferred.”

Petit ‘retired’ to Florida with a small ‘r’ in 2003. He opened Louis Louis in Santa Rosa Beach with sons Philippe, Olivier and Louis. Later, Philippe and Olivier opened Piccolo’s and The Red Bar. In spite of his and his sons’ success, he still longed for Arkansas.

Louis Petit, the father of fine dining in Arkansas, is now a proud grandfather, as new restaurants continue with chefs trained by the first generation of chefs at Jacques and Suzanne.

“I had this dream, of coming back once more, which is amazing,” Petit said. He recalled that he would discuss this desire to return with his friend, and ‘vacation neighbor,’ Jim Keet, whose family spent time in Brighton Beach.  “We’ve always talked about having a restaurant together,” Petit continued. Keet told Petit that Petit still has such a good name in Little Rock that it would be a shame not to use it.

“You would not believe the number of people who stop me and say so you and Louis are doing this restaurant?” Keet interjected.

“But, I told Jim, I’m happy on the beach, so unless we could find the perfect venue . . . and then we found it,” Petit said.

The perfect venue is what was originally Restaurant 1620, opened in 1990 by Jacques and Suzanne chef Paul Bash and Scott Novicky, who also opened Spaulé, Graffiti’s and Purple Cow, with locations across Arkansas and Texas. The restaurant was eventually sold to Restaurant 1620’s chef, Evette Brady, who operated the award-winning restaurant for more than 14 years, eventually being joined by her nephew, Chef Tim Morton. Brady sold the restaurant four years ago to Little Rock businessman Rush Harding. He renovated the location, renaming it Savoy 1620, bringing on his son, Payne Harding, as chef. Morton joined them as a chef at Savoy 1620, as well as joining the Hardings as chef at Cache Little Rock in the Rivermarket.  With Harding closing Savoy 1620 earlier this year, the location became available to Petit and Keet for their new venture, the Petit & Keet Bar and Grill.

Standing in the middle of their new dining site’s construction, Petit and Keet are enjoying the moment. “I love this restaurant because I created it,” explained Petit. “It’s one of my children. So, coming back here was emotional. It’s wonderful. It really is. It’s a love.” Keet added that he, too, is one of Petit’s children—a proclamation that was met with much laughter from Petit. While Petit shares in the mirth, his serious tone returns. “If you want to be happy in life…if you cook for a living, it’s not a great life. If you cook because you love it, it’s amazing. We have both been blessed to be successful—not once—but many times.”

With a twinkle in his eye, he points to Keet saying, “I’m not as successful as he is.”

Family is entwined in their love of their business. “We have some things in common,” stated Petit. “I work with my three sons. Jim works with his two sons, Tommy and Jake. It makes our lives so much better, because we see them regularly, and they understand the demands of what we do.”

Keet beams at other inspiration for their partnership. “My sons and I have been wanting to do a restaurant together. I never thought they’d want to do it,” Keet said. “When they approached me, we were the first and only licensee at the time of Taziki’s; but we always wanted to do something that was ours.”

Keet clarifies Petit & Keet Bar and Grill is not going to be Jacques and Suzanne’s redux. “We don’t want people thinking ‘fine dining,’ but it will be the best polished casual dining with craft beers, a solid wine list and delicious food every time they’re here.”

Initially hoping for a December open, the date is now early 2017. “We’re tearing it all apart, giving it a different feeling with the most delicious food at a great price point, and lively fun atmosphere for both adults and families with a great bar, two private dining rooms, redo outside to bring it inside,“ explained Keet.  “When you walk into the restaurant in two months, you won’t recognize it. We’ll have local chefs, locally sourced foods. People in tune with the local dining scene we will recognize our staff and know their good reputations.” he said.

Petit notes that Keet’s restaurant experience is much broader than his in light of the various types of dining options Keet has been involved. To Petit, consistency, shown by the Keets, who operate numerous Taziki’s restaurants, is the key to success.  “We don’t want to be the best one day and then another day you’re not.  We want to be an everyday restaurant—casual, but elegant.”

The admiration Keet has for Petit is more than professional. “The two best people I’ve met in my life—and I started at KFC  (Kentucky Fried Chicken) when I was 15 years old—who are good at customer service is Louis Petit—Louis is the best—and my son, Jake.”

As president and CEO of the parent company for Taziki’s, Keet brought Petit in as a guest speaker at one of the company’s national 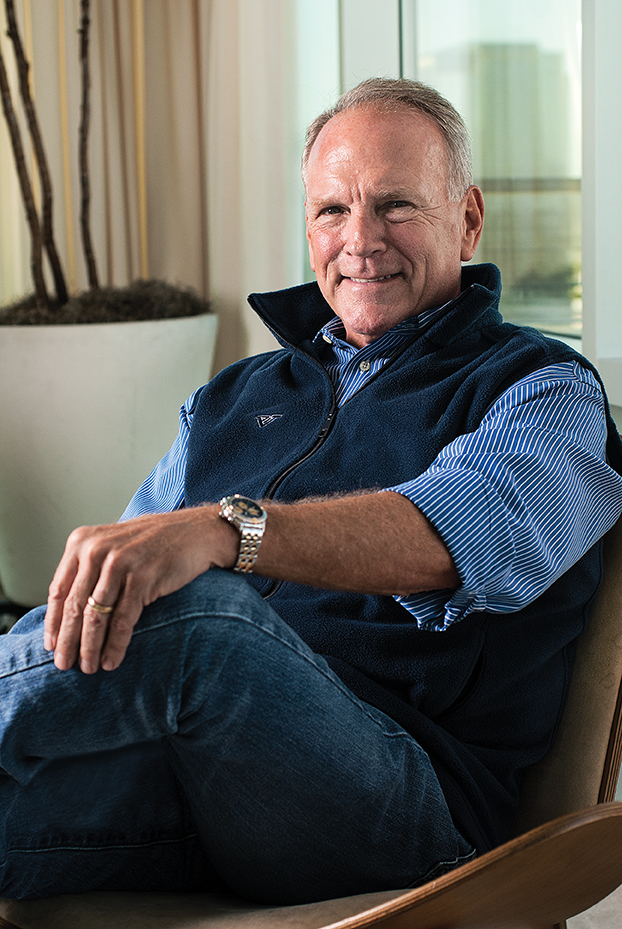 For more than four decades, Jim Keet has worked in, managed or owned more than 100 restaurants from fast food, to family buffets to casual dining to white tablecloths.

conferences, because “he embodies what extraordinary, true friendliness is with every guest.” Jake shares the same joy, Keet said. “He always has a smile on his face.  He truly cares about the guests’ experience.” Laughing, Keet quipped he’d like to think his son learned a bit of that from him.

Keet’s oldest son Tommy, the fourth partner, who according to Keet is a lawyer who doesn’t like ‘lawyering’, is the president of Taziki’s in Arkansas and Oklahoma. “He’s become a great businessman,” stated Keet. Stephanie, Jake’s wife, does a fantastic job handling all of the marketing and social media. Suzanne, Tommy’s wife, handles administration. It’s truly a family business. I’ve been married for 45 years to Margaret, known to friends as ’Doody’. We married when I was six!” he says to more laughter from Petit.  “My wife’s a reformed attorney, who helps with all of the legal aspects, along with my oldest daughter Chase, who helps with real estate issues.

For the culinary duo, excellence is a constant pursuit. “We share in a real passion for doing things correctly—delicious food, exceptional service for every guest, for every meal, every occasion and separating ourselves from others,” states Keet.

“Part of the secret of this business is you can never rest on your laurels. You’re only as good as your last meal,” explained Petit.  “It’s important to share your dream to the people who work with you. They have to see the future. It’s got to be a fun place to work, but you have to get every person working with you to understand, don’t let the success go to your head.  Yes, we are successful, but it can all be gone tomorrow. So, you better enjoy it.”

And, enjoying it they are. 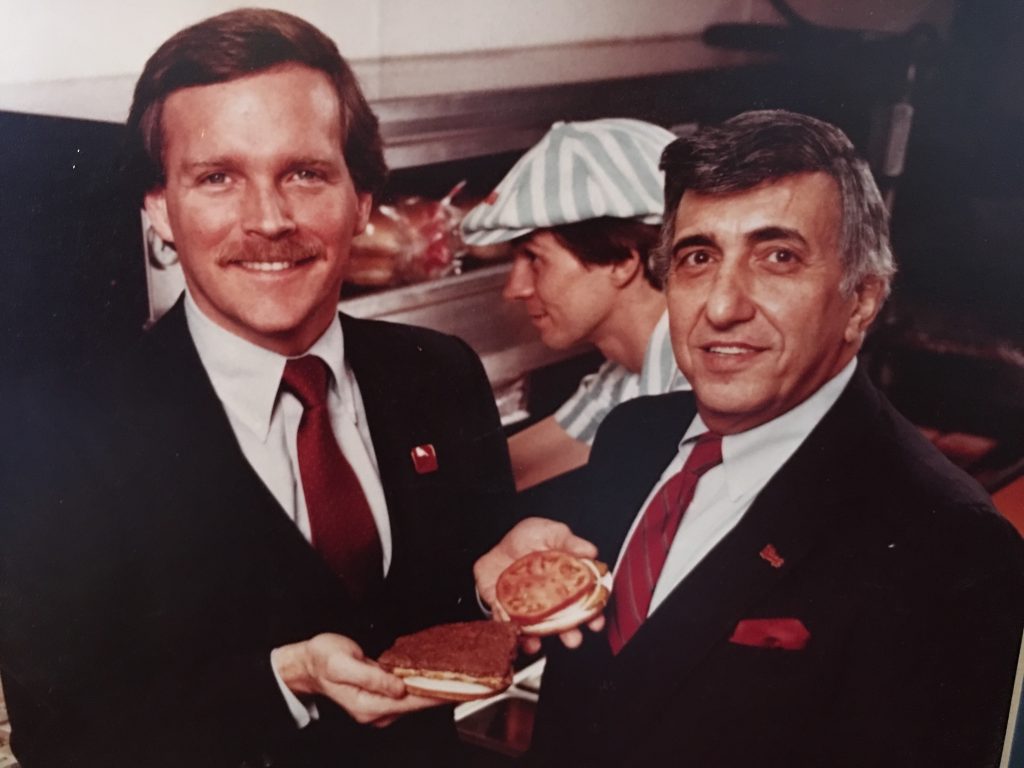 Keet, 1982, with business partner Jerry Hamra with the prestigious Founder’s Award, recognition for the best operated Wendy’s franchise in the world.