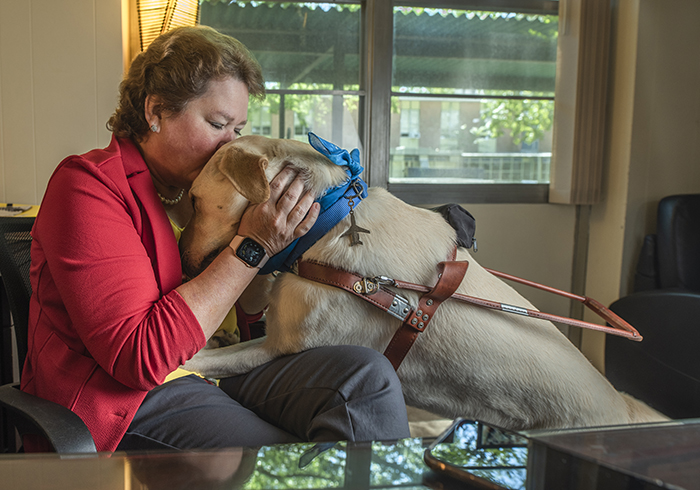 A cheerful face with a beaming smile provides a warm greeting at the World Services for the Blind headquarters in Little Rock. “Come on back,” the tender soul and president and CEO of the organization, Sharon Giovinazzo, invites. She serves as the guide down the hallway and into her office, her stride confident and resolute. One would be forgiven to forget that she is 100 percent blind.

She extends her right palm for a loving pat on the head of her service Labrador, with a name too perfect for words — Pilot. “We’ve got a corporate pilot,” she jokes, speaking of the pooch. “That’s how far we’ve come.”

Giovinazzo wasn’t always visually impaired. For the first 31 years of her life, she didn’t even register it as a possibility. But that year, her vision went from faintly fuzzy to completely gone in just seven months, a symptom of her multiple sclerosis diagnosis. It was hard for her to fend off the depressive thoughts, initially. She felt it a death sentence, no longer feeling like she had any marketable skills nor quality of life.

But she was wrong, a realization that she humbly and proudly admits today. 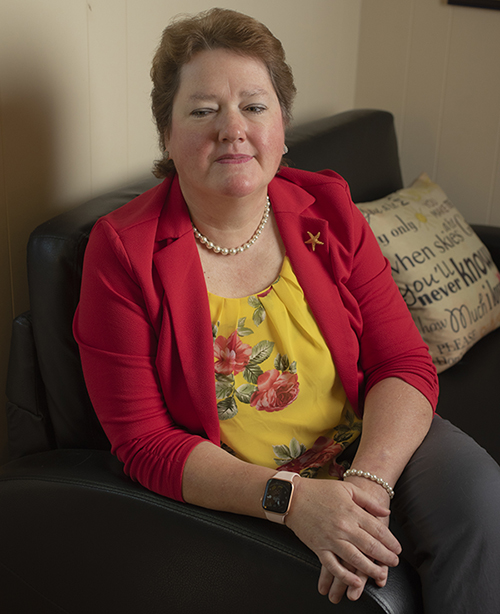 Giovinazzo in her Little Rock office.

“I remember so vividly, after I was given the diagnosis and my vision just kept on going down and down, carrying my computer up to the attic. I was like, ‘Well, I can’t use this anymore,’” she recalls, while today sitting at a desk with a computer to her right and an iPad and iPhone in front of her. “But, once you have that person who reaches their hand out to you to say, ‘There’s help. We can help you do the things that you did when you could see,’ that’s when you have that aha moment.”

Today, Giovinazzo and World Services for the Blind serve as that helping hand for the blind and visually impaired, specifically for the clients of the organization, which she lovingly calls her “starfish.” With a starfish pendant adorned on her red jacket, she fluently recites the popular parable based on the star-shaped sea creatures from memory, which speaks of the passion to help as many people as possible, regardless of how daunting the task appears.

One day, an old man was walking along a beach that was littered with thousands of starfish that had been washed ashore by the high tide. As he walked he came upon a young boy who was eagerly throwing the starfish back into the ocean, one by one.

Puzzled, the man looked at the boy and asked what he was doing. Without looking up from his task, the boy simply replied, “I’m saving these starfish, sir.”

The old man chuckled aloud, “Son, there are thousands of starfish and only one of you. What difference can you make?”

The boy picked up a starfish, gently tossed it into the water, and turning to the man, said, “I made a difference to that one.”

It’s a fitting analogy. There are tens of millions of visually impaired persons in the United States today, and, according to the National Federation of the Blind, 70 percent of that demographic is unemployed.

But Giovinazzo is not. She worked fervently to remain in the workforce, to make a difference, even achieving two master’s degrees after her diagnosis. It’s a path that she knows any blind person can walk, with the right guidance and additional support and understanding from the general public.

“I tell everybody that it took me losing my sight to gain vision,” she says.

But even though the organization has existed since 1947, has served more than 16,000 clients from not only here in Arkansas, but also each of the 50 U.S. states and at least 59 countries from around the world, it remains under the radar. World Services for the Blind is Arkansas’ “best-kept secret,” as Giovinazzo puts it. 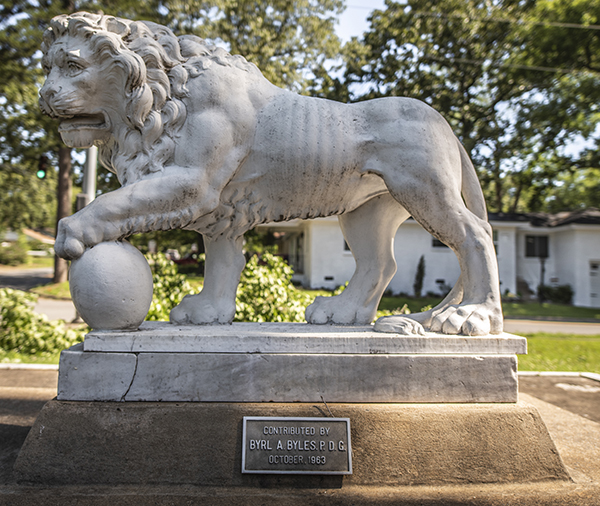 Beauregard the Lion, a statue that stands proudly outside of the organization’s campus.

Such behind-the-veil nobility was an honor for the leading lady and her staff of 34; they didn’t need the glitz and glam, rather, were comforted and content with being simply the hand that was there to guide when needed. But that’s not always a fiscally feasible endeavor, especially amid an ever-changing world and, this year, a pandemic.

According to Giovinazzo, the founder of World Services for the Blind, Roy Kumpe, originally forecasted that 50 percent of the organization’s funding would come from Lions Club International, which World Services for the Blind is still affiliated with. But, Lions Club membership numbers are largely on the decline in the United States. Here in Arkansas, two of the club’s storied state chapters are dissolving. One of those is the Grady chapter, which famously put on an annual fish fry fundraiser that was routinely visited by prominent Arkansas politicians, such as former President Bill Clinton, U.S. Sen. Tom Cotton and Gov. Asa Hutchinson, among many others. After 63 years, that event was announced as canceled for the foreseeable future in 2019.

Today, Giovinazzo juggles a $3.1 million annual budget that consists mostly of tuition costs, room and board and awarded grants, as well as various crowdfunding opportunities that range from individual donations to public events.

But operating a 70-year-old campus encompassing six buildings and 70,000 square feet means that “enough” is always more. During her tenure, as only the second executive of the organization to be completely blind, it’s amassed exponential growth. But keeping up, expanding not only the services of the vocational rehabilitation empire but also the physical amenities and operations, could be likened to a game of whack-a-mole.

Which is part of why she recently initiated a capital campaign to raise the monies necessary to continue providing high-quality care to its diverse clientele. The first phase of the campaign is focusing on updates to existing infrastructure and mechanical systems. Giovinazzo admits, behind a laugh, that a sales pitch to fundraise for new A/C units is not sexy, “unless you’re here living with an air conditioner that’s going to go down when it’s more than 100 degrees out.” 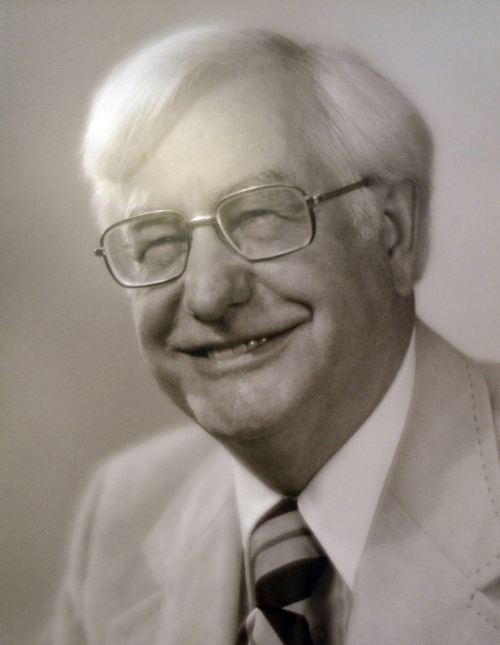 This effort, while also being a “best-kept secret,” has been challenging.

“So many people who have driven by here their entire lives, who see Beauregard standing on the corner, who have seen our sign, who have seen people walk up and down the road with canes, they have no idea what we do. That’s not always bad, but it is when you’re trying to tell the story of the impact that we have in the community.”

At that, Giovinazzo finds no better example of her and her team’s dedication to service than this year. In March, when the entire world came to a screeching halt as the COVID-19 pandemic spread across the globe like a wraithy wind, her mission was focused solely on her starfish. Around the country, like-minded organizations began shutting down entirely, displacing residents in the same motion. But Giovinazzo estimates that 50 percent of her clients are homeless; following suit would mean that all of them would have nowhere to go, some back into the troubles that World Services for the Blind had helped them out of — drug and alcohol addiction, poverty, unemployment, etc.

“Knowing that we had 482 cases reported in one day in the state of Arkansas, and 82 percent of them came from settings just like mine, that was reality,” she says of the initial days of the pandemic, when everything was shutting down in waves.

“I remember the day that I was going to lock down the campus and say, ‘You can’t go anywhere. You can’t leave campus.’ They all sat up in the auditorium, and the first thing I heard someone say was, ‘You’re not going to close. Are you?’ I said, ‘No, we’re not. We’re going to ride this out, and we’re going to be fine.’”

At that, Giovinazzo wipes away a few reminiscent tears that had welled up in her eyes and trickled down her cheek. “That wasn’t any pressure, whatsoever,” she jokes, laughing away the memory. “Still really emotional there.” 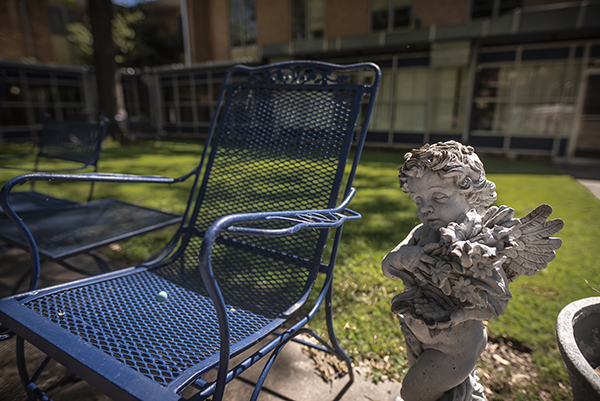 World Services for the Blind did just as she said it would, riding out the storm and even becoming a safe haven for displaced people with visual impairments from across the country.

“We became almost this shelter of a place, so much that counselors from all over the U.S. started calling us and saying, ‘You guys are open? We don’t know what we’re going to do with our people,’” she says. “Then, we ended up with more people who were enrolling in our online classes, because we worked really hard for the last three years to have a learning management system on board, to put all of our curriculum online where it was accessible for everyone, and they didn’t have to leave their home.”

She was battling a pandemic, in the heart of the capital campaign to raise money for the future progress of the organization, but that all fell to the back burner. People with any kind of disability are too often the first left behind, and the visually impaired community is no exception. Giovinazzo couldn’t let that happen on her watch. Helping as many people as she can is always her lodestar.

Sentiments of karma, juju or “what goes around, comes around” find plenty of relevance for the current state of the organization. Despite these speed bumps, the capital campaign continues as if there never were any. Its goal of raising $1.1 million by January 2021, so as to qualify for an additional $600,000 grant, is over halfway to fruition. To date, they need only $400,000 more to surpass that hurdle before moving on to the next one.

Giovinazzo projects that phase two of the campaign, which in total has a $3 million price tag, will revolve around upgrading the dorm space at the facility for its live-in residents.

“Visual impairment isn’t a death sentence because it’s going to be your mother, your aunt, your sister, your father, your grandma, your grandpa, your best friend who is going to experience it,” she says. “As we move into 75 million aging Baby Boomers, we’re going to see more of it. And there’s no reason why your quality of life has to change. All you need are the tools in your toolbox to be able to go forward. That’s what we do. And we’re pretty darn good at it.”

If you would like to learn more about World Services for the Blind or contribute to its fundraising campaign, visit www.wsblind.org.