With a Little Help from His Friends 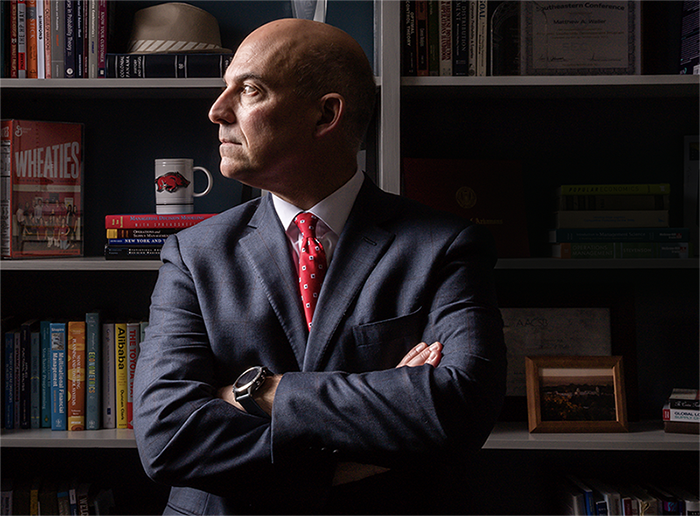 “The real hero is the man who fights even though he’s scared … The real man never lets his fear of death overpower his honor, his sense of duty to his country and his innate manhood.”
– Gen. George Patton speech to the 3rd Army, June 5, 1944

During one of the darker periods of his battle with rectal cancer, Dr. Matt Waller received a phone call from Don Bobbit, president of the University of Arkansas System. As much as anything, it was a call that saved his life.
“I was feeling really down. I even had considered resigning; that’s how bad I felt,” Waller says. “Don called me and said, ‘Matt, this will pass. You will be better. You’re doing a good job now. Think how much better you’re going to do when you’re feeling good again. Don’t give up.’
“I thought, he is just such a wonderful person. The president of the whole system; I’m like a nobody here, and he’s calling me and encouraging me. I’ll never forget him for that. He called me at least once a month on my cell phone.”
Today, Waller, dean of the Sam M. Walton College of Business, has the rare perspective granted to those who’ve teetered on cancer’s precipice and stood over it as a vanquished foe. Cancer-free for about a year, he’s working out again, even hopping on his bike occasionally to commute from Fayetteville to meetings in Bentonville. He’s savored every minute of the year-and-counting, particularly time spent with his wife Susanne and kids Sophia, Grant, Luke and Sarah.
He’s screened and tested more than the average person – always will be – and while no cancer patient is ever guaranteed anything, things look great. And even if they didn’t, Waller now knows how wide and deep his circle of support runs.
“I went in every day for radiation, Monday through Friday, and it makes you feel bad. It makes you feel down. And I was doing chemotherapy as well,” he says. “I’m telling you, the people at the university here were phenomenally encouraging to me. I felt like I had to tell the faculty, so I sent an email to the whole college, and I told them what was going on. I said, I’m going to do my best, and we’ll see where this goes. I got so many emails and letters and people stopping by. The support I received was incredible.” 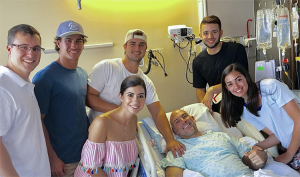 Matthew Waller, dean of the Sam M. Walton College of Business, recovers from surgery in June of 2017, surrounded by his students and family. Courtesy of Matthew Waller.

“Part of the reason I agreed to do this [interview] is because I hope that if other people are suffering like I was, that they could read it and be encouraged and know that they shouldn’t give up, that they should keep going and that there’s a good future ahead.”
Waller, 54, grew up in Kansas City and earned his undergrad from the University of Missouri. He got his MBA and Ph.D. in business from Penn State and moved to Arkansas in 1994. In the spring of 2016, he was appointed to his current post as dean of the business college, mere months before he started experiencing symptoms on a December beach vacation that led him to his doctor.
“I Googled these symptoms and based on that, I thought, if this is true, I’ve got rectal cancer,” he says. “Of course, when I read about it, it was a little scary, and I didn’t tell my family because I didn’t want to scare them, and I didn’t know if it was true.
“So as soon as we got back home the first week of January, I went to my general practitioner. She examined me and said, ‘Oh, you need to go get a colonoscopy right away. This doesn’t look good.’”
Waller’s hunch of rectal cancer was, sadly, correct. And what’s more, it had spread to lymph nodes and some other tissue. On the advice of his physicians, he immediately began chemo and radiation treatments with the intent of surgery later.
“I had always thought I would not want to do chemo and radiation, but they said you really need to because if we cut into it, it will probably spread, so we need to shrink it,” he says. “They gave me [chemo drug] Xeloda, also known as 5FU.”
At this, he lets out a hearty laugh.
“There are some people who’ve taken 5FU who have some funny things to say about it, as you can imagine. Once you take it, you know why it’s called 5FU.”
Despite the vicious illness and unpleasant medication, Waller developed an ironman reputation for being unflagging in his work routine, cancer or no cancer, treatment or no treatment. He carried that attitude with him entering the surgical phase of his fight which began May 2017 at Baylor Medical Center in Texas.
“You can ask anyone who was with me, when I was in the hospital, even though I took sick leave, I worked every day,” Waller says. “I mean seven days a week while in the hospital. I was working on my email until five minutes before they brought me into the operating room, and I was able to start working within hours of surgery. I preferred that. I love my work.”
Yes, but still, you ask, why? Was it the craving for control and normalcy? Was it finishing what you might not get the chance to later? Was it an escape, pure workaholism? Why push yourself like that?
“Being dean is a very difficult job. It’s very time-consuming. You have to really push hard because there’s just so much to do,” he says. “Of course, I didn’t know I was going to have this happen, right? So, I’d started all kinds of initiatives. I felt like if I quit, even though I was very tempted to a few times, it was going to cause a big problem for a lot of people. I just felt like I shouldn’t do that.”
Waller would ultimately enter the hospital three times, and it was during these procedures he encountered the worst stretches of his recovery. Following a colon resection, he developed a hematoma that grew so large it damaged the resection and required a second operation to repair it. He also underwent a temporary ileostomy, which reroutes body waste into a bag outside the body to give the colon a chance to heal. 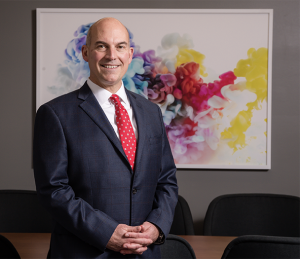 Even under the best circumstances, any surgery is rife with the potential for complications and Waller’s were no exception. He endured an infection and a bout with severe dehydration, each one hammering away at his already weakened body with intense, unrelenting pain. Still, he kept pressing forward.
“A lot of people didn’t even know I was in the hospital because I was communicating with them, talking to them on the phone,” he says. “In fact, I talked to a benefactor on the phone who gave a multimillion-dollar gift while I was in my hospital bed and he never knew. He doesn’t even know today that I had cancer or that I was in the hospital. I don’t even remember [the conversation] clearly.
“There was a time during my second surgery when I could not complete a sentence. I couldn’t form a word for five days because of the pain. This guy calls my cell phone, and I said, ‘Oh my gosh. I’ve got to do this.’ So I pick up the phone, and I’m talking to him. It was really weird; it was like my adrenaline just overtook me, and I was able to do it, but it wore me out so much that once I was finished, I just fell asleep.”
A year after the biggest fight of his life, Waller can’t fully comprehend, much less describe, why he’s still here today or share with others what he endured on that path. He can’t quite capture in words the fear he felt or adequately illustrate how the savage disease wracks body and mind. Heck, he can’t even remember some of the fight at all, so intense was the razor pain clawing at his guts and from which every cell screamed unrelentingly for release.
But for everything he doesn’t know about his journey back from the brink – back from moments that threatened to buckle his will and turn him over and under in a slow, agonizing death roll – there are other things he understands today more clearly than he ever could’ve imagined.
“Sitting in the room where people are getting chemo or radiation, you meet people who are suffering terribly,” he says. “Sometimes they’re in horrible pain, and sometimes you quit seeing them anymore. It’s just a terrible, terrible thing.
“The good thing about all this, I will say, I am much more compassionate than I used to be. I had never been in the hospital before, and I had never suffered from sickness, really. Now, when I hear about people going to the hospital, my heart is moved. I take it very seriously. I hated it when I went through it, but in hindsight, I think it made me a better person.”

Breaking the Mold: Lee Ann Jolly Succeeds in Academic and Fitness Fields
May 5, 2021
Go to Top
Never Miss An Issue!