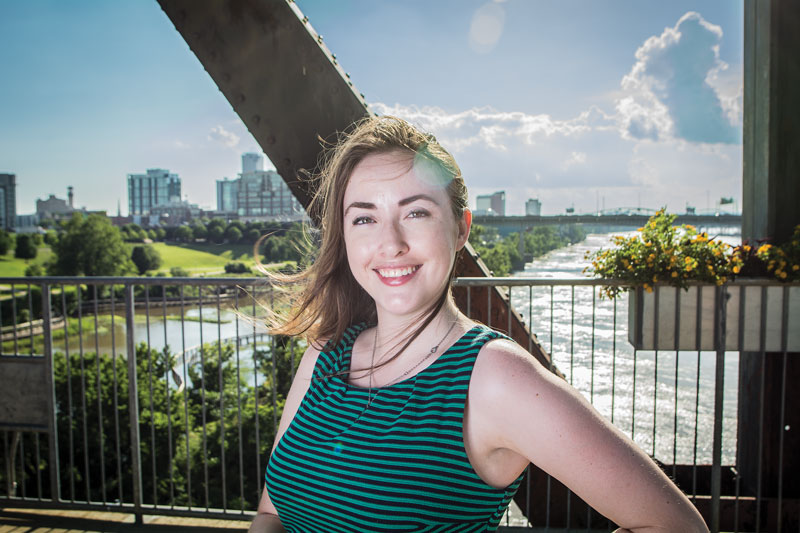 [dropcap]I[/dropcap]t was an important race – the biggest of her life so far. Ousting veteran Little Rock City Director Joan Adcock from her position would have been a big win for Molly Miller. At just 28 years old, Miller saw the need for a progressive candidate in the city and she didn’t hesitate to jump into the race.

A few months later, her supporters – and many around the city – were shocked when she withdrew.

In an act true to her character and the transparency of her campaign, Miller revealed that anxiety and mental health issues were her reason for stepping aside.

Miller, a native Oklahoman, came to Arkansas to attend Hendrix College in 2007. She stayed in state and received her master’s in public health at University of Arkansas for Medical Sciences. She went on to attend the Clinton School of Public Service and earned another master’s degree – this time in public service.

Throughout her time in school, Miller worked on different campaigns, even serving as vice president of the Young Democrats for a few years. She had no intentions to jump into public service right out of school, but one evening she attended a neighborhood meeting about the I-30 expansion issue. “I had just bought a house that is very close to I-30,” says Miller.

“People were frustrated with the issue and felt officials were being kind of wishy-washy,” says Miller. “I was also getting more and more frustrated about the public vs. charter school issue in Little Rock and so many other local issues.”

Instead of being an activist, Miller decided to run against Adcock in the 2016 race. “I had a background in political fundraising and I had a strong network of support from progressive groups,” she says.

Fundraising went well; Miller brought in around $20,000 for her campaign.

Miller hired consultants to help with her campaign. She has struggled with anxiety and depression most of her life. “I learned really early to always have my happy face on when I’m around other people,” says Miller.

The consultants told Miller to change her appearance and she began to feel controlled. “They would say, ‘You look too young, you need people to see you as being older and more professional. Your hair is too long so you need to cut it short, you need to wear more makeup because it will make you look more grown-up.’ I felt like, ‘I’m 28, I’m grown.’”

“I just didn’t feel like I was able to really express my opinions on things the way I wanted to,” she says. “I had to be very politically correct, tow the line, stay in the middle on every issue. I felt like I couldn’t be my authentic self and that was really important to me.”

In addition to running the campaign, Miller was working full time and keeping solid relationships going with her boyfriend, friends and family. But on the inside, a storm was brewing.

“I’ve always been anxious and as an adult I would drink as a coping mechanism for stress, anxiety and depression,” says Miller. “As my stress and anxiety level rose, the more I would drink.”

As the stress and depression escalated, Miller began taking medication for her anxiety, but she did not quit drinking. “As you probably know, you’re not supposed to drink when on anxiety medication. And with the amount I was drinking, I felt like I was losing my mind,” says Miller.

“The day that I finally broke, I was sitting at work and I had been staring at my computer trying to do work – or trying to at least make it look like I was doing work – so that I could just get through the day. I was trying to stop myself from having an anxiety attack or panic attack. I couldn’t stop myself, even with deep breathing. I finally, I just got up and I was like ‘I can’t do this anymore. It’s just too much.’”

Unsure of what to do next, Miller’s thoughts turned dark. She felt she had ruined the opportunity for anyone else to get into the campaign or to get her name off the ballot. “I’d imagine I was crossing the street and it wouldn’t be so bad if this car hit me – not killed me, but put me in the hospital so that I had at least an excuse to drop out or to not be actively campaigning.”

Things continued to escalate and the thoughts of self-harm worsened. Finally, Miller had a breakdown and reached out to her boyfriend to help her. “I was afraid if I was alone I would hurt myself.”

She knew things weren’t right and decided to go to The BridgeWay and seek inpatient services for a week.

Doctors at The BridgeWay fixed her medication issues and she credits group therapy and the structure there for calming her and getting her back in the right mindset.

After returning home, Miller began drinking again. She drank even more than before because of the continued stress of the campaign. “I knew that I couldn’t keep campaigning,” she says. “I knew I couldn’t, something had to give.”

She made the difficult decision to withdraw four weeks before the race. “I was very honest that I was dealing with mental health issues and that I didn’t feel like I could do the job even if I was elected, and I definitely couldn’t continue campaigning. I had a lot of guilt and shame.”

Miller began drinking more. “When it was at my worst, I was drinking probably half a bottle of wine a night and taking medications that do not work if you drink. They have very bad side effects,” says Miller. “A week after the elections, my boyfriend and I went to Memphis for his birthday and I decided I was going to make it really special. I wanted everything to be great because I wanted him to only have good memories of me because I decided I was going to kill myself.”

“I can’t explain why that was the decision I came to,” says Miller. “The whole weird thing is that I was very cognizant of ‘this is not a normal thought pattern.’ I knew I had to tell someone and I finally told him.”

Miller returned to The Bridgeway and they adjusted her meds again. “I refused to admit that I actually had a drinking problem because, to me, my drinking, it wasn’t a problem for me because I hadn’t lost anything other than my mental health,” she says. “I hadn’t lost a job, I was very high-functioning. My family didn’t know. My best friends didn’t know.”

She finally admitted to her alcohol abuse and a social worker urged her to go to rehab. She started an outpatient program and came clean with her family. “It was really hard for me to admit that I had a drinking problem that was contributing to all of these mental health issues,” says Miller.

“I did drink once while I was in the program, and that convinced me that I had a drinking problem that needed to be dealt with in order for me to get back to my full mental capacity.”

Miller is still dealing with depression and anxiety and sobriety. “They’re all not easy things to deal with,” she says. “They don’t just go away. I wish it was that easy, there was a switch that said ‘You’re going to be happy and carefree and you’re not going to ever want to drink.’ Even when you take antidepressants you still get into ruts.”

Miller cites stress and lack of positive coping mechanisms as contributing factors to her anxiety. “All my coping mechanisms were negative. I was just drinking, overeating or just sleeping all the time or taking my stress out on other people. None of those things are healthy. One of the things that I’ve worked on since then is really developing positive coping skills.”

Miller feels one positive change is that she is more patient and nicer to her family and friends.

As part of her recovery, Miller started a blog to promote a more open discussion about mental health and about substance abuse. “It’s cathartic for me to write about things like this, but also to create a space where people can be vulnerable and actually think and talk about how they’re feeling and their own problems or whatever,” says Miller. “When you are vulnerable with other people, other people feel they can be vulnerable with you and ask for help. That’s one of the reasons I have made it a point to be really open and honest since the campaign about everything that’s gone on.”