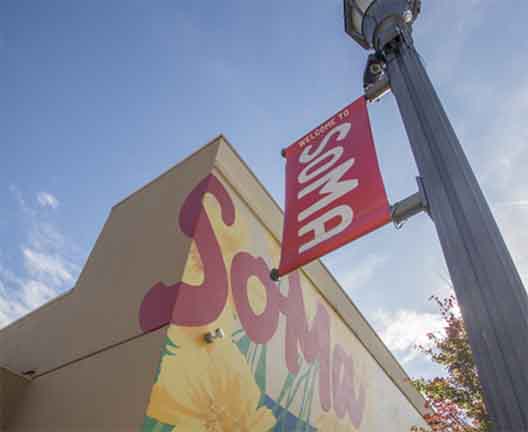 Little Rock is expanding the bounds of an existing entertainment district and creating a new temporary district in the South Main (SoMa) neighborhood.

The City of Little Rock board of directors has approved expanding the River Market Entertainment District’s boundaries. The district has been expanded to the south by one block, stretching from Rock Street to River Market Avenue.

Originally, the bounds of the district encompassed a four-block area that includes “all public places lying within (1) Block 1 of Pope’s Addition in the City of Little Rock and (2) 30 feet of each side of the centerline of the following blocks of the following streets in the City of Little Rock: 300-600 blocks of President Clinton Avenue, 100 block of North Rock Street and 100 block of St. Vincent Plaza, also known as the 100 block of North Commerce Street,” according to the ordinancecreating it.

“The River Market Entertainment District launched in 2019, and added an important entertainment component to one of our most popular downtown areas” Little Rock Convention & Visitors Bureau (LRCVB) President & CEO Gretchen Hall said in a statement. “This new law creates consistent operating hours making it easier for our District restaurants, bars, and shops to promote. Additionally, it allows guests to enjoy an adult beverage in expanded outdoor areas within the district. Today more than ever, we continue to look for added ways to promote and support our hospitality industry partners as we navigate these unpredictable waters,” she added.

In addition, the board of directors have created a temporary district stretching from 12thto 17thblocks of Main Street in the SoMa neighborhood that will operate from 11 a.m. to 10 p.m., seven days a week.

This temporary district is slated to last for eight weeks.

“We were happy to work with the restaurant owners in SoMa to help create this temporary entertainment district as a way to increase the viability of the SoMa outdoor dining room,” Gabe Holmstrom, executive director for the Downtown Little Rock Partnership, said. “As we are all aware these are unprecedented times, and we appreciate the city’s board of directors’ flexibility to assist us as we help support our local businesses,” he added.

In the entertainment districts, individuals aged 21 years or older are allowed to carry alcoholic beverages in public places and participating locations. However, to take alcohol outside of a point of purchase, individuals must have a wristband that they receive with their official entertainment district cup. Drinks are not allowed to be taken from one bar or restaurant to another.

In 2019, the Arkansas State Legislature passed Act 812, which allows cities and towns to create entertainment districts with the purpose of promoting hospitality and tourism. According to the act, an entertainment district is a “contiguous area located in a part of a city…that is zoned for or customarily used for commercial purposes and contains any number and any combination of restaurants, taprooms, taverns, entertainment establishments, hospitality establishments, music venues, theaters, bars, art galleries, art studios, tourist destinations, distilleries, dance clubs, cinemas or concert halls.” These districts may be permanent or temporary.

Both Fayetteville and North Little Rock established its own entertainment districts in June.

Mountain Home became the first Arkansas city to establish an entertainment district after the legislature passed Act 812 and was followed by El Dorado.