Keep On Runnin’: Little Rock Marathon Still a Go for 2021 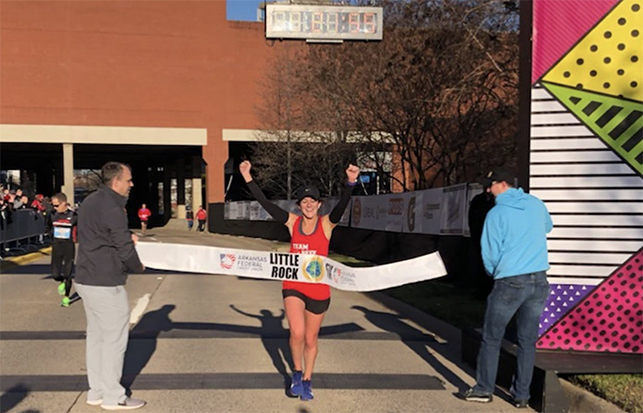 To know Geneva Lamm and Gina Marchese, co-executive directors of the Little Rock Marathon, is to know eternal optimists. For nearly 20 years, the duo has led the signature springtime road race through brilliant sunshine and ice showers, all while watching the event grow to mammoth proportions.

And if things hold as planned, they will even have navigated a global pandemic with hardly a break in stride. The 2021 Little Rock Marathon Weekend, famed for its friendly nature and Frisbee-sized finisher medals, will is slated for March 6 and 7.

“As of yet, we are on,” Marchese said. “Especially with the vaccines coming into play as early as next March, it’s plausible that we will be running.”

The proclamation comes as music to the ears of Little Rock Parks and Recreation, which benefits from proceeds of the event. Since its inception in 2003, the marathon has donated over $1.25 million to Parks and Rec of which it is a division, but receives no public funding. It’s also good news for the local economy which has been reeling from lost tourism revenue through most of 2020. Marathon statistics report the race weekend typically yields roughly $6 million in local spending.

And, the decision is very good news for runners who in 2020 saw one 5K, half- and full marathon event after another either canceled or adopt a virtual format where the distance is run solo over the course of the runner’s choice. Marchese said the announcement to proceed has been met with nothing but enthusiasm from the running community.

“They’re positive. They’re happy. They’re ready to run an organized event. People are champing at the bit,” she said. “We got approval to host our Creep ‘N Crawl Half Marathon and 5k in October and we had 600 people in the 5K and 325 in the half.”

Marchese said the runners showed their appreciation by following the events’ safety guidelines to the letter.

“You arrived and you got your temperature checked in your car before you even got out. Then, you were directed to go park your car and stay in your car until you’re called to your corral,” she said. “The half marathon went off first and that was much easier to manage with 350-ish people. That was at 4 p.m. and then, at 4:30 p.m., we had the 5K. It was amazing. Everybody followed directions and it was wonderful.”

These races served as good practice for the much larger Little Rock Marathon event, which includes four distances for adults and a kids’ mile. Marchese said all will be on the docket, but with some changes in the name of safety and convenience for the runners. For instance, numbers will be curtailed to maintain social distancing and still keep things moving. Marchese noted the October race headcount, modest compared to the marathon, took a lot longer to go off due to required spacing.

“I mean, the Austin Marathon just cancelled. They have 25,000 people. Well, they would have had start lines that were two miles long, if they did it properly. That’s not feasible in many locations. Now, we could have done that; we could have had people line all the way down Cantrell, all the way from downtown to Dillard’s if we wanted to. But that’s stupid. You’re going way too far just to get to the start line.”

Other safety measures include runners wearing masks until crossing the start line and then putting it back on after crossing the finish line, and cutting back on the size of the race expo. Live packet pickup will still be allowed, with stringent safety precautions in place.

All of which, Marchese said, are small prices to pay for the privilege of having a race to begin with. She said for everything that looks or feels different for the 2021 race, organizers are working to preserve the lively spirit of the event. And, she made an appeal to the community to help make that happen.

“The moral support of the community is the lifeline of the runners. It’s the heartbeat of the race and it matters,” she said. “Even though our numbers are going to be smaller, that makes it even more important that people come out and cheer them on.”

“I will tell you, every organization is trying to raise money and this is a very difficult year to do so, so we won’t be paying for as many things that as we have done in the past at the event. We’re gearing back to our early days of the race and we’re going to be more vanilla, instead of a rainbow. We’re having to tighten the ropes significantly. So, crowd support matters.”

“But while you won’t see a spaceship spinning in the air or a mirror ball that’s the size of the moon or a board game with Olympic-sized Connect Four, we hope people will still come to this race. People love our southern hospitality; the hotels are kind and it’s affordable. And then, you get this big, giant medal. Yeah.”