Gearing Up: Little Rock Rangers Are Ready for 2019 Season 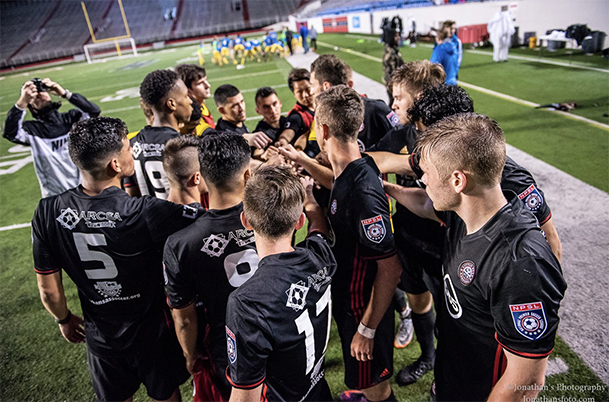 Spring is just around the corner in Little Rock, and while winter has not quite left the city, the anticipation for warmer weather has been growing for most Arkansans. Who can blame them?  Arkansas is called the Natural State for a reason and you can find most Arkansans taking advantage of everything the state has to offer. You can grab your hammock or bike and set out on any of the beautiful trails around the city or visit one of our 52 state parks. You can rent a kayak with Rock Town River Outfitters and see the Arkansas River like most haven’t or grab a few craft beers with friends at any of the local breweries like Flyway Brewing Co. The most anticipated activity, however, is what the historic War Memorial Stadium brings in…The Little Rock Rangers.
The Rangers are Little Rock’s very own local soccer club who compete in the National Premier Soccer League (4thtier of the American soccer pyramid) and are made up of majority collegiate players. 2019 will be the club’s fourth season in existence and sure to be the best one yet after coming off a historic 2018 season where the club finished with a long list of achievements. The Rangers ended the regular season with a 7-3-0 record after establishing a 5-game win streak by outscoring their opponents 7-1 with 4 shutouts. The Rangers became Heartland Conference Champions before traveling down to Laredo, TX to face the undefeated and nationally ranked No. 1 Laredo Heat in the South Region Semi Final where the Rangers came out victorious in overtime. This win would move them onto the South Region Final in Miami where they were defeated by Miami FC 2, who ultimately went on to become the 2018 NPSL Champions. After their season ending in Miami, the Rangers finished out as the nationally ranked No. 5 club out of 100 teams. If you listen closely you can still hear the excitement as you drive past War Memorial Stadium but what’s the mindset of the coaches, players, and fans as we close in on the 2019 season?

“This is the largest turning point for soccer in Arkansas.”
Jason Rector, Vice President of Operations

One could only imagine the amount of pressure that could be surrounding the organization to capitalize on the success of their previous season. “Absolutely, although last year’s success was a great accomplishment, it does add pressure to continue to win and be as or more successful this year.  As the head coach, it is also an opportunity to look for ways to improve and be better,” Will Montgomery, Head Coach of the Little Rock Rangers, says.“But, as far as the team, it will be my duty to keep them relaxed and to concentrate on performing.”
The players have also recognized the pressure as the team prepares for the new season.“I am excited and looking forward to the start of the season. The previous season motivated me to want to be as ready as I can be for the 2019 season,” Sabelo Hlongwane, Little Rock Rangers player who is returning for his second season, explained.“I would have to say that the pressure is on the entire club but as players, we are looking to use the pressure as motivation and inspiration. The desired goal is to defend our title.”
Along with the pressure to build off the success of the 2018 season, there comes quite a bit of expectation surrounding the club as well. Most of this expectation is focused on the fans and for Jonathan Wardlaw, President and Founder of the Rangers, he“wants to see attendance grow in 2019”.  He later added,  “My goal is always to try to continue growing our fanbase. I leave everything on the field to the coaches and players. My focus is always to figure out how to put more fans in the stands and hopefully our success on the field will help with that. We had a pretty good media following at the end of last year and I hope we can pick up where we left off.”  With a venue like War Memorial Stadium, a growing soccer community in the city and the incredible early success of the club, the organization and supporter groups feel very positive on the growth of attendance for the new season.“I’m eager to see tangible growth of the fanbase, both in terms of actual numbers in the stands at War Memorial Stadium on match days and in social media engagement,” Ryan Stallings, founder of Rangers supporter group, the Red Watch, says.“I’d love to see the Rangers average 3,000-3,500 fans in attendance per match this year. This would represent healthy growth, and show both the front office staff, and the players on the pitch, that their great work is deeply appreciated,” he added. The Rangers have finished each of the last three seasons in the top 4 of average attendance in the NPSL. 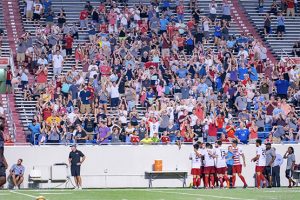 “We are looking to start playing friendlies in early April with the conference schedule kicking off in early May.”
Jonathan Wardlaw, President and Founder

The excitement is continuing to build leading into the new season however the most desired achievement to look forward to is the US Open Cup. On January 30th, US Soccer released the clubs who have qualified for this year’s tournament and after the success of 2018, the Little Rock Rangers are definitely in!
It was the talk swirling around the organization and fans as last season progressed deep into the playoffs and now it is official, the Rangers will play in the US Open Cup. The US Open Cup is the most pristine and oldest soccer competition in the U.S. that is still being played today.“This is the largest turning point for soccer in Arkansas, “ Jason Rector, Vice President of Operations, says on the significance of qualifying.“No team from Arkansas has ever qualified so to become the first with a club going into their fourth season is huge!”
2019 will be the 106th edition of the knock out tournament that is set up in a single elimination format. Last year there were a total of 97 clubs competing from each tier of US Soccer. The tournament is more geared for the professional side, being the MLS and the USL, however the lower amateur clubs also are given the opportunity to compete should they qualify.  “The chance to compete against the best clubs in the country, possibly against professional Major League Soccer teams is an enormous achievement for our club and an experience our players will cherish forever,”Ante Jazic, Technical Director, explains. There were 55 amateur teams who competed in the tournament last year. The MLS clubs typically do not enter the tournament until the fourth round giving the lower level clubs the change to battle it out with each other before reaching later rounds but it very possible you could see an amateur vs professional match up. Since 2000, a club from the MLS has won the tournament.

“I’m eager to see tangible growth of the fanbase, both in terms of actual numbers in the stands at War Memorial Stadium on match days and in
social media engagement.”
Ryan Stallings, Founder of Rangers supporter group; the Red Watch

If the 2019 season is anything like the last season, Little Rock and the state itself is in for an exciting year of soccer that you will definitely want to be apart of. Season Tickets for the 2019 season are on sale now at www.littlerockrangers.com/tickets. You can also sign up for the Rangers’ newsletter on their website, so you are update with everything revolving around the club or follow them via Twitter and Instagram at @lrrangers and like/follow their Facebook page.