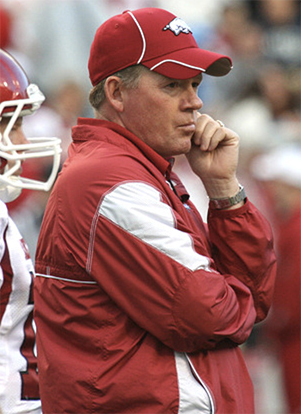 Petrino’s scheduled appearance on Monday, Sept. 9, will mark his first public appearance in the state since his April 2012 firing after it was revealed he had hired his mistress to a position on the football support staff. Under Petrino, the Hogs finished the 2010 and 2011 seasons ranked in the top 10.
Club meetings are held at Embassy Suites in west Little Rock with the exception of the season kick-off lunch with current head Hog Chad Morris, scheduled for Tuesday, Aug. 20, at the Statehouse Convention Center in downtown Little Rock.
The remaining 2019 club schedule is as follows:
For more information, visit LRTouchdown.com.
READ MORE: Hogs vs. ASU is Closer Than You Think
Image courtesy of Wikimedia Commons
By Tyler HaleAugust 6, 2019
Share this post
Share on FacebookShare on Facebook TweetShare on Twitter Pin itShare on Pinterest Share on LinkedInShare on LinkedIn Share on WhatsAppShare on WhatsApp