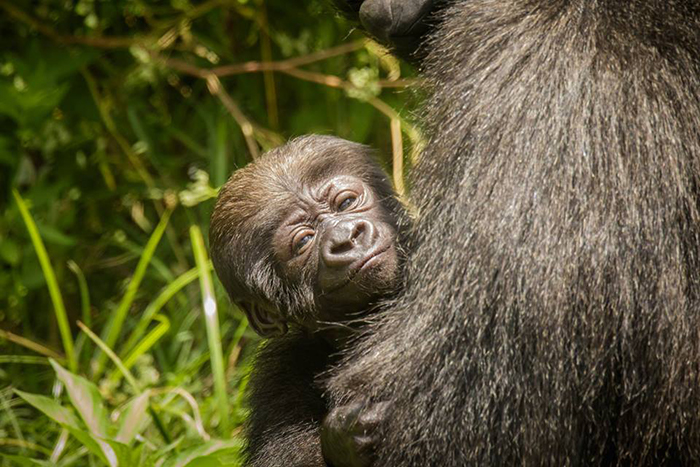 The Little Rock Zoo recently welcomed a newborn baby gorilla, and they’re asking for your help naming him!
The baby was born on June 20 to Sekani, a female Western Lowland gorilla, and Kivu, a male Silverback gorilla. Susan Altrui, zoo director, says the birth came at the recommendation of the Species Survival Plan ® for the Western Lowland gorilla.
“The gorilla is also an AZA SAFE (Saving Animals From Extinction) designated species, targeted with special collaboration efforts between AZA member organizations to save the animal in the wild,” Altrui says.
When an animal is born at the zoo, staff members do not interfere unless there is a medical emergency. The mother takes the baby, and sometimes staff members don’t even see the infant for days. Therefore, it is difficult to determine the gender right away.
A few days after the gorilla was born, staff members were able to get a glimpse and figure it out. The Little Rock Zoo then hosted a gender reveal party to officially announce the exciting news to the public.
“Keepers stuffed blue tissue in white cardboard boxes with question marks drawn all over them, and placed them all over the gorilla yard. The public gathered to watch, and the gorilla family was let out into the yard to tear into the boxes and reveal the gender of the baby,” Altrui says.
Keepers often place items like cardboard boxes in animal habitats as enrichment for the animals, Altrui says, and the gorillas certainly seem to enjoy tearing through them.
“Big sister Adelina, Sekani’s second baby born at the Little Rock Zoo, tore into one of the boxes first and revealed the secret.”
The keepers have chosen three names to pick from — Sangha, Bukavu and Azingo — and you can cast your vote here: https://www.surveymonkey.com/r/8CFB672
Voting will be open until midnight on July 27, and the name will be announced during the zoo’s Summer Freeze event on July 28.