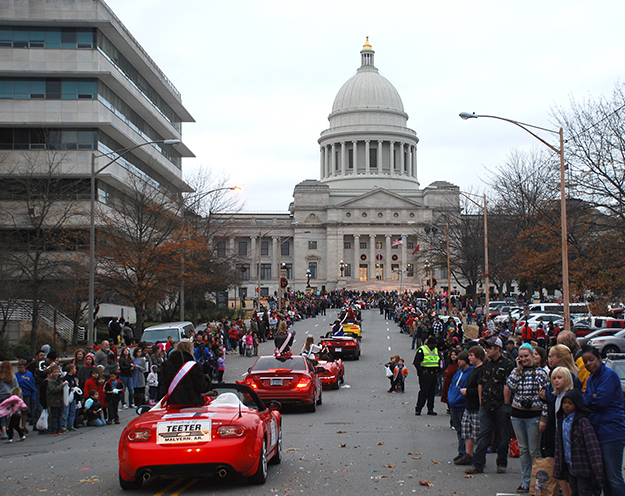 The Little Rock Convention & Visitors Bureau (LRCVB) has announced the return of the Big Jingle Jubilee as a holiday street fair for its 50th anniversary after a hiatus in 2020.

The street fair will take place on Capitol Avenue between Victory Street and Cross Street in Downtown Little Rock on Dec. 4 from noon to 5 p.m. Holiday and food vendors will be set up in the State Chamber of Commerce office parking lot. Santa Claus will be making his appearance in the vendor area to meet and greet all kids — including those that are kids at heart.

Continuing traditions of the past, the annual holiday parade will lead up to the lighting of the State Capitol. The office of the Arkansas Secretary of State has hosted the lighting since 1938, and this year will include the tradition of holiday lights and fireworks.

Gretchen Hall, LRCVB president and CEO, says the annual lighting of the State Capitol has always been an important holiday tradition in Arkansas.

“Whether it’s a parade or a street fair, the Jubilee represents a chance for Central Arkansas residents to come together in an inclusive atmosphere and celebrate the holidays, just as it has for 50 years,” Hall says. “And the lighting of the State Capitol for the holidays is something every Arkansan should see in person at least once.”

Central Arkansas high school marching bands are invited to register to submit a video of their best halftime performance here. This year, the winning band will have the opportunity to perform the National Anthem to kick off the National Junior College Division 1 National Football Championship. The nationally televised game will be held at Little Rock’s War Memorial Stadium on Dec. 17 at 7 p.m. Second and Third place winners will receive a promo code for each band member and staff to receive a free ticket to the football game.

Food trucks and holiday vendors are invited to register for the street fair competition.