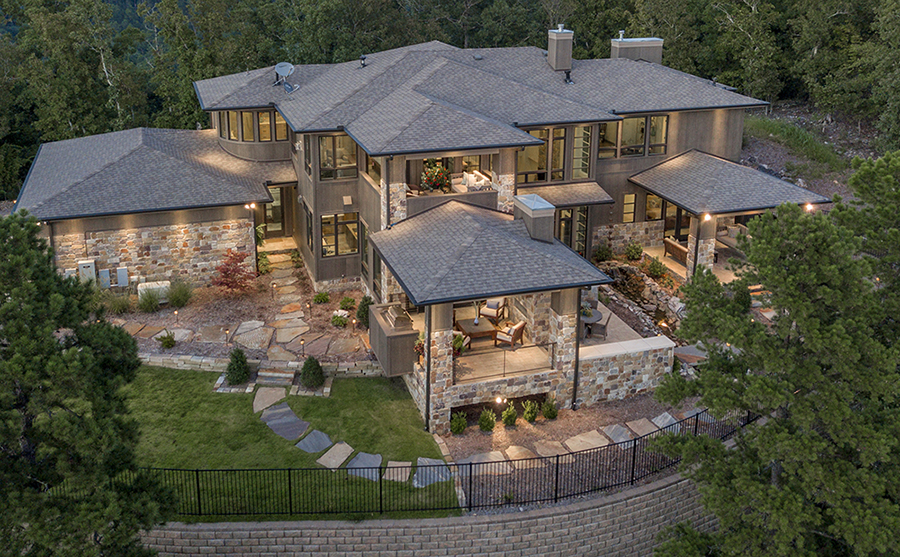 Patty and Keith Wingfield are certainly no strangers to the home business. After all, Patty’s father was one of the founding members of the Arkansas Home Builders Association in the early 1950s, making the shift into appraising in the 1960s to focus on commercial appraising. About the time Patty and Keith were married, he was the developer of a large single-family subdivision in Sherwood. “He understood so much about the entire real estate and construction industry,” she says. 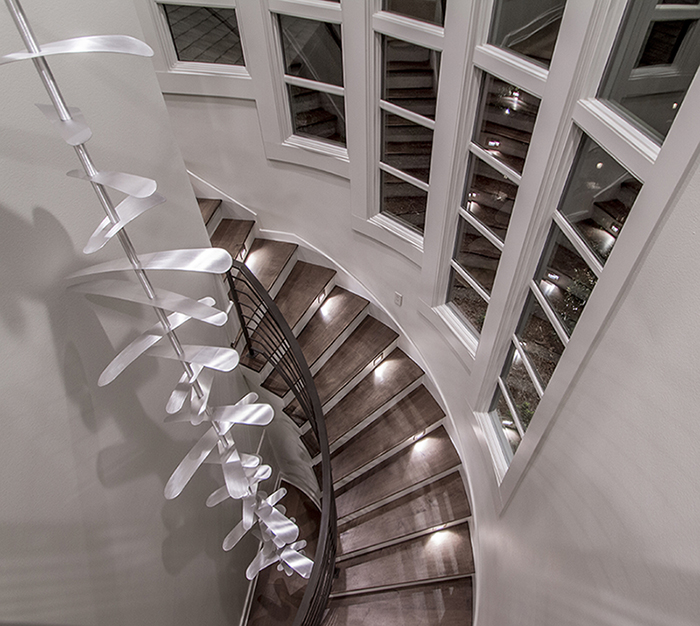 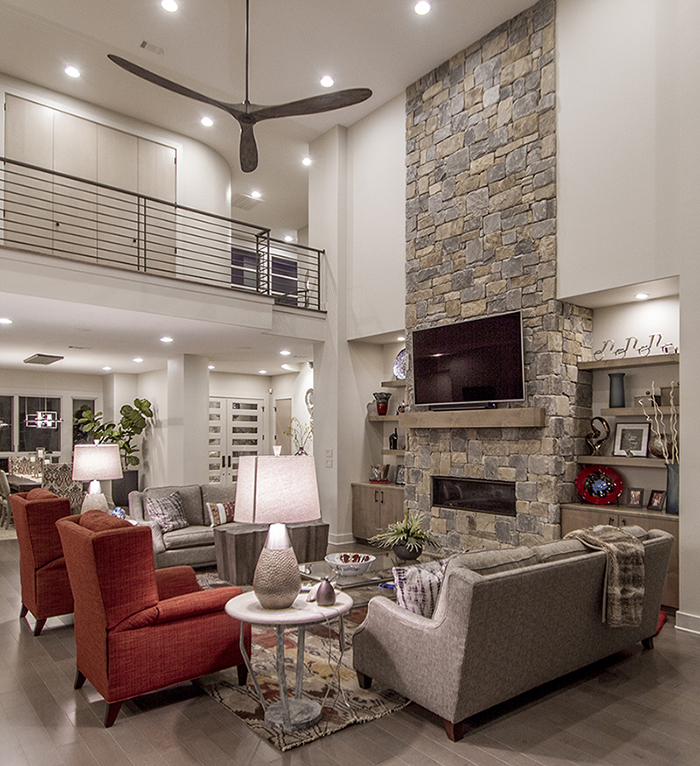 “We were not strangers to home building,” he says, crediting both his and Patty’s homebuilding family background. “We built our first house for ourselves in 1983, and our second in 1997. You can’t do that unless you have some experience or help.”

These days, we all know “going green” is of utmost importance, and River Rock focuses on custom home building with an emphasis on energy efficiency. “Energy is not a clichéd topic for us. I mean, we don’t just talk the talk. We walk it — all the way,” Keith says. “We understand the building science of energy efficiency where others really don’t. We energy model and test all of our homes. That sets us apart from every other builder.”

What also sets the company apart is its in-house 3D design capabilities that enable the team to give clients a unique experience where they can virtually walk the space of their dream home before it becomes reality. 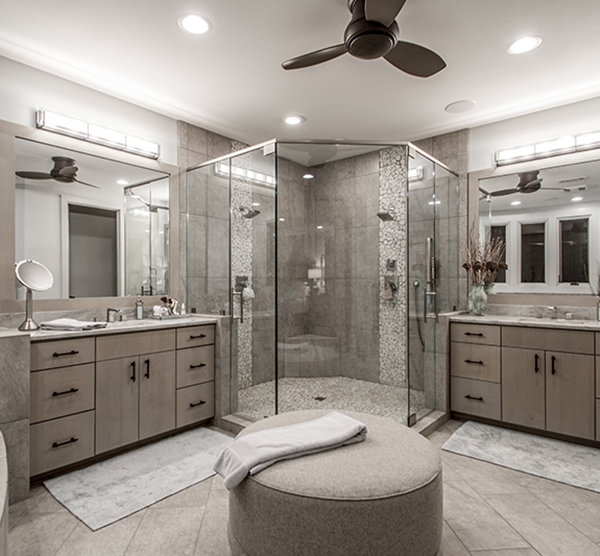 The team, also composed of project manager and designer Ryan Renard as well as office manager Christin Hayes, showcases its building mastery with the Ferndale home featured here — or “little slice of heaven,” as homeowners Mary Jane and Mike Cole like to call it.

Once you arrive and soak up the spectacular view from the very high ridge that looks both north and south, it’s clear to see how it gets this name. 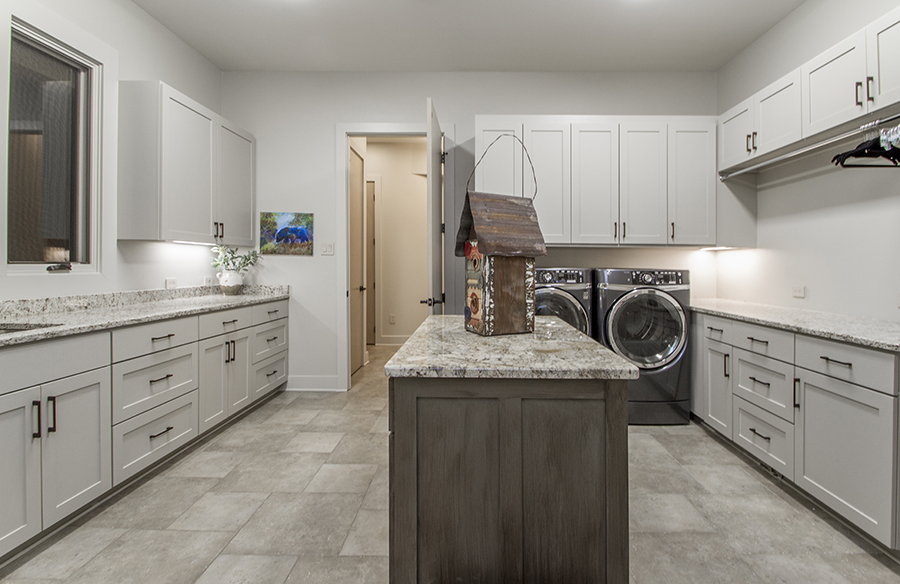 “When Mike met me to look at the site and the plans, the first thing I said was, ‘We need to change the plans to fit the ridge,’” Keith says. “We did, and still have some topography challenges to deal with now. It was a challenge just to go on the roller-coaster road to get to the top.”

The entire project took about 19 months, but as Keith says, “you have to see the environment to understand that.” The team could only bring in fill materials in half loads and concrete in 6-cubic-yard bunches. “The logistics were really problematic throughout the project,” Keith adds.

The tough logistics led to one of the home’s greatest assets of all — the exterior. The landscaping has many features that highlight the scenery from the outcropping of rock placed on the embankment of the cut in the ridge to the peaceful running stream and small pond. The view at sunset is simply stunning and really sets the house apart. The owners wanted a stone-and-wood siding look but with a modern exterior. So, the team combined natural stone from Schwartz Stone in Scranton, Arkansas with a new reverse board and batten siding product from Louisiana Pacific called Smart Siding. The Smart Siding came pre-finished with a wood stain and the reverse board and batten mirrors a cool, lapped horizontal siding. The thin veneer stone was cut into various rectangular shapes and then tumbled to take off the sharp edges. The blend of the two products looks like nature pulled it all together.

But the home isn’t just all natural in its looks. It is sustainable at its finest. 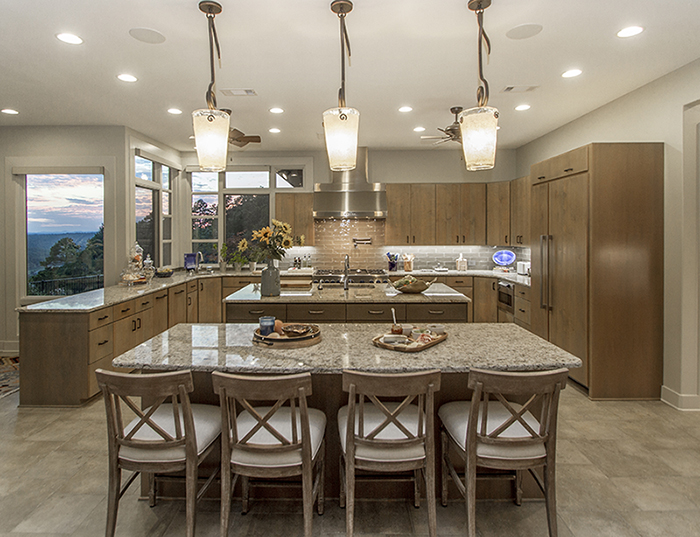 “If it’s not sustainable, River Rock doesn’t do it,” Keith says. “We use high-performance materials like the Smart Siding, which is an engineered wood (sustainable) siding with a 50-year warranty. The stone is a natural product and extremely durable.”

The entire building assembly from the foundation to the tip of the roof is foam filled to provide the maximum efficiency to the walls and attic.

“This home is built to be a high-performance home with all the materials selected to be some of the best available,” Keith says.  The team used an exterior sheathing product manufactured by Huber Engineered Woods called Zip-R. It has an integrated moisture and air barrier membrane that is attached to the exterior surface of the sheathing. In addition, a half-inch closed-cell foam board insulation is laminated to the interior side of the sheathing, providing a thermal break between the wood studs and the wood. “This thermal break not only adds the wall R-value but substantially reduces the thermal transfer that a wood to wood connection allows,” Keith points out.

“[River Rock] specializes not only in supreme energy efficiency but also in the most difficult of job sites,” Keith adds. “Other builders might run from a steep hillside, but we really run towards them. It’s a challenge, but I employ professional engineers, surveyors and geotechnical engineers to make recommendations on how to build a foundation and structure.”

Once inside, the mesmerizing two-story living room includes a circular stairwell that wraps around the elevator, creating a gap from the circle to the flat wall.

“It’s two stories tall, and the artwork that hangs in this gap is really cool,” Keith says. As a bonus, the semi-circle is formed on the exterior as well and is visible in the front elevation as a circular feature of the home.

LED bulbs in 62 recessed cans in soffits and overhangs provide long-lasting and efficient exterior light at night. “We used LED throughout the home. It’s the only way to go,” Keith says.

Additional chandeliers and pendant lights make for a modern and elegant ambiance throughout. The interior features subtle hues of mostly white and light greys brought to life by both Patty and interior designer Carol Lantz. The interior doors and kitchen cabinetry were stained to look weathered. 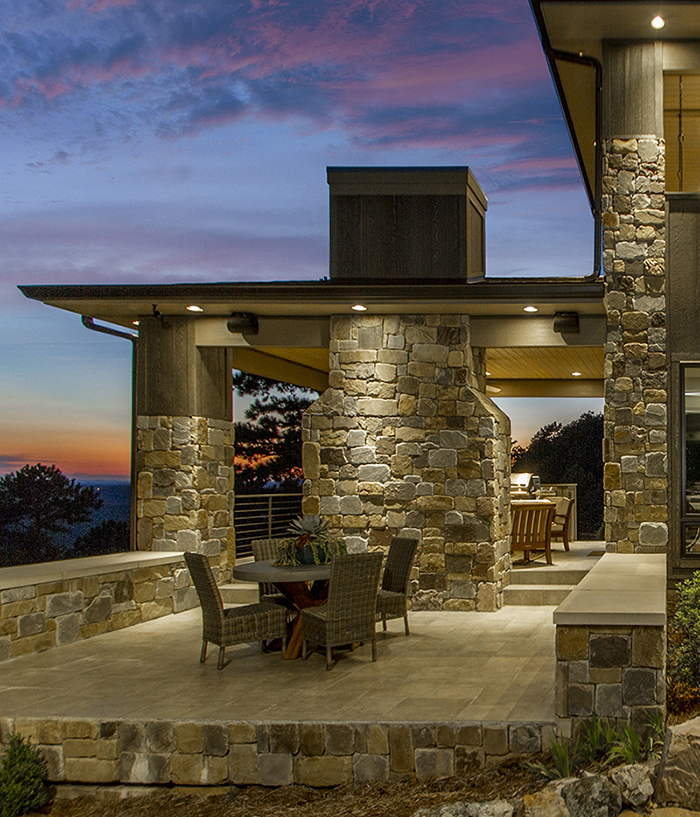 “It was difficult to get the actual weathered look, but I really think they turned out well after some replacement cabinet and interior doors were installed,” Keith says. “What most customers don’t know is that lighter stains go into the wood differently from wood to wood, even in what should be the same manufacturer. That’s because wood varies in nature from tree to tree even though it’s the same species.”

Prefinished hardwood and tile envelop the entire space, including several porches with whimsical daybed swings. “This home is the Cole’s oasis. There are so many relaxing areas in this home, both interior and exterior,” Keith says. “Even the laundry room is spacious because Mike likes to do the laundry, and he wanted room to spread out.”

“I often say that we are married to the client during construction,” Keith says, “and in some cases forever. We have to work together to achieve a common goal much like a husband and wife work together to make a good marriage.

“Our ultimate goal is always the same on every project, and that is to make the customer happy. We want customers to have the home of their own dreams.”