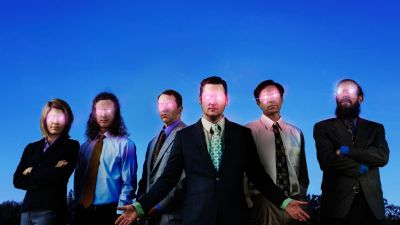 Sarah Woolf of Follow the Woolf has your guide to Arkansas’ music scene. This week, go see Kenny Chesney, The Creek Rocks and other great artists.

Wednesday 7/18
Sinners & Saints with John Burnett / Four Quarter Bar 415 Main St. NLR / 8-11 /  If you’re happy and you know it, or you need to forget about a bad day this two-man band from Charlotte, NC, is for you.  “Weather they’re crooning about heartbreak or tearing it up with joyful abandon, you’ll feel happier for having listened.”  Local guitar favorite John Burnette opens.
The Rad Trads / Stickyz Rock N’ Roll Chicken Shack 107 River Market Ave, LR / 8-11:30/ $5 / These guys are currently on tour supporting Lake Street Dive, had an off night and are here in LR helping celebrate Lagunitas 3rd anniversary of availiblilty in AR.  Come on out and grab a pint and here the sound Past Magazine says “With a killer driving groove, New York Soul Rebels The Rad Trads truly show how tight they are as an ensemble while having fun at the same time.”
Thursday 7/19
Monsterboy Listening Party / Cregeens Irish Pub 301 Main St. NLR / 7-10 /  Come join Chris Long (aka Monsterboy) and his wife & music partner Veronica Wirges as they showcase their new material and play a live performance.  Monsterboy has been busy making a name for himself on the indie alternative pop music scene with a showcase at  Bonaroo Music Fest and a trip to South by Southwest.  Central Arkansas music fans might know him as the lead of the old power pop band The Flaming Death Fairies, or his acoustic sets around town, now come hear his latest and greatest project Monsterboy. www.monsterboylives.com
Friday 7/20
Bluesboy Jag at Sounds of Unity/ Unity of Little Rock 2610 Reservoir Rd Little Rock / 7-9 / $10 / Little Rock Americana folk duo Ten Penny Gypsy performes with Little Rock’s own cigar box bluesman Bluesboy Jag for a special early night of great classic blues.
Arkansauce / Revolution Music Room 300 President Clinton Ave LR/ 9-11:30/ over 21 $8 under $10/ 18 and up / This four piece genre-hopping string band has been making the Arkansas music scene dance since their formation in Fayetteville in 2011, now with a third album under their belts they bring their one of a kind sound of powerful harmonies, improvisational guitar, banjo, and mandolin leads, with a foot stompin bass, and heart-felt songwriting back to Little Rock.   Lovers of bluegrass, newgrass, and a good time, this show is for you. http://www.arkansaucemusic.com
Rodney Block Collective / South on Main 1304 Main St. LR / 9:30 / $15.  Come join the Rodney Block Collective as they celebrate their friend and Rodney Block music groups operations and management ,Patrick “Junebug”Pettus Jr. This will be a night of GREAT jazz, and R&B with live performances by The Rodney Block Collective, Bijoux, DJ Hy-C,  R&B Crooner J-Phil and other guest for “Junebugs Jam Session.”  To reserve seats call 501-244-9660.
Alvin Youngblood Heart / White Water Tavern 2500 W. 7th St LR / 9:30-12:30 / $10 / This Grammy award winning cosmic blues man and his band bring their one of a kind sound back to the White Water Tavern.  Known as one of the world’s foremost practitioners of country blues he doesn’t forget the 60’s & 70’s guitar rock of his youth, combine those things with a little bit of western swing and vintage country, and you’ve got a sound like no other, the sound of Alvin Youngblood Heart.  The great bluesman Taj Mahal once said “The boy has got thunder in his hands.”
Big Dam Horns / Four Quarter Bar 415 Main St. NLR / 10:00 / $7 / What a great way to end a Summer Friday night then with one of Little Rock’s Favorite Party bands, The Big Dam Horns.  Those horns will be raising the roof as they play some of your favorite dance songs from the 70’s – today. If you’ve seen them you know, if you haven’t don’t miss out.  Got the late night munchies Four Quarter also has one of the best kitchens in Central Arkansas open till 1:30 am.
Saturday 7/21
Wayne ‘The Train’ Hancock & Scott Biram / White Water Tavern 2500 W. 7th St. LR/ 8:30-11:30 / $15 / The king of Juke Joint Swing since his debut in 1995 with “Thunderstorms and Neon Signs,” Wayne ‘The Train’ Hancock comes to the White Water for a show of that special house rockin hillbilly boogie sound. www.waynehancock.com  Opening the show is THE one-man-band Scott H. Biram.  To quote the man “My music is the bastard child of Punk, Blues, Country, Hillbilly, Bluegrass, Chain Gang, Metal, and Classic Rock.” With just a stack of amps, a ’59 hollow body Gibson, and a stomp board he puts on a show you gotta see to believe.  http://scottbiram.com
The Body with Lingua Ignota and Or / Stickyz Rock N’ Roll Chicken Shack 107 River Market Ave, LR / 9-11:45 / $10 advance $12 day of show / The Body the a doom-metal duo of Chip King and Lee Buford from Portland, OR continue to defy what it means to be a “heavy” band, they are known for their intense, abrasive live shows, “whose waves of dissonance create an abiding dread or an overwhelming sense of terror.”  Their current album title is an exert from Virginia Woolf’s suicide letter, “I Have Fought Against it, But I Can’t Any Longer,” with themes of loss, desperation, and loneliness.  https://thebody.bandcamp.com  They are joined by Lingua Ignota from Lincoln, RI http://linguaignota.bandcamp.com, and Or out of Little Rock https://ororor.bandcamp.com
Adam Faucett and the Tall Grass / Four Quarter Bar 415 Main St. NLR / 10:00 / One of Arkansas favorite singer songwriters Adam Faucett brings his long awaited, much anticipated fifth and critically acclaimed album It took the Shape of a Bird to the Four Quarter Bar for the North Little Rock album release show. He will have CD’s T-Shirts, and now VINYL.  One of my favorite quotes about Adam comes from Paste Magazine, “Nothing can prepare you for the sound that comes out of his mouth when he sings – or bellows – his stellar songwriting.  It is a soulful power beyond belief.”

Thursday 7/19
Modest Mouse / Arkansas Music Pavilion 5079 W. Northgate Rd / 7:30-10:30 / $39.50-$61.50  / Alternative Rock favorites Modest Mouse bring their infectious sound to the Arkansas Music Pavilion.  Formed in 1993 in Issaquah Washington they released three albums before their fourth & breakthrough album in 2004 Good News for People Who Love Bad News which includes their hit song “Float On, “ and has sold over 1.5 million copies and earned them 2 Grammy nominations.  Since then the band has released two more albums, both have landed in the top 5 of the Billboard 200.  The Arkansas Music Pavilion continues to knock it out of the park with great shows. www.modestmouse.com Tickets www.buy.amptickets.com

This week The Murphy arts district announced the line-up for the 31st annual music fest, and you do not want to miss it!  Coming to Eldorado October 18-20 for 3 days 3 stages, and 16 acts of great music are:  Toby Keith, Justin Moore, Bret Michaels, Morris Day & the Time, Sheila E, Lita Ford, Sammy Hagar & the Circle, George Clinton & Parliament Fukadelic, Carly Pearce, Jimmy Allen, and special late night shows from none other than Cardi B and Gucci Mane.  For more info and tickets visit www.eldomad.com
Read more about last weeks lineup here »