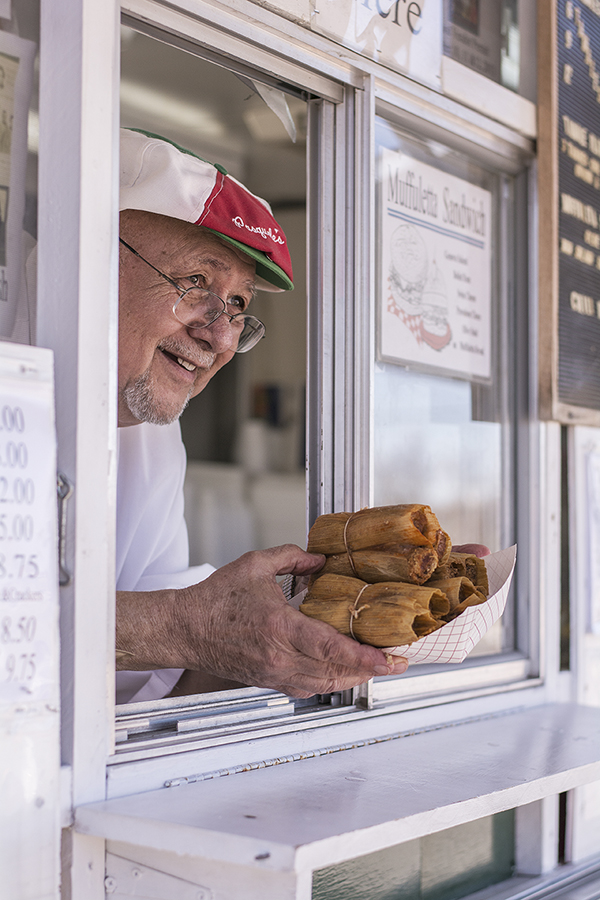 by Josh Conley
In a small trailer on Highway 49 in Helena, Joe St. Columbia stands over a simmering pot of red broth filled with tamales, tied into threes and stood on end to simmer. They’ve been simmering for six hours and are nearly ready for the lunch crowd that will arrive soon. Now in his eighties, Joe prepares his tamales to the same recipe that his grandfather, an immigrant to the area from Sicily, developed in the late 1800s. As he fills, rolls and simmers his tamales, he feels an unmistakable connection to the roots of his family and the history of his home. Smiling, he tells me, “This tamale has survived world wars, the Great Depression, my generation and now onto the next generation, too.”
The tradition of hot tamales in the Delta is far from a secret. It has been recorded through documentaries, countless articles, historic markers and song. The humble tamale’s origins in the region are often discussed and debated, yet if you ask any tamale maker how they suppose the tamale found its way into the canon of Delta cuisine they will all tell you the same thing: We learned it from Them. For some, the them they are referring to might be Mexican migrant workers who came to the area to work the fields and traded the recipes to their peers. Others claim the tamale to be a derivative of African, or Caribbean, or even Native American traditions. In the case of Joe St. Columbia’s grandfather, it was a cultural exchange, “They taught him how to make tamales, and he taught them how to make spaghetti.”
Regardless of the food’s origins in the region, it has become an integral part of the culinary vernacular, and the recipes continue to be passed down. Delta tamales differ from those found anywhere else. Slight variations occur from kitchen to kitchen, however they are often filled with pork, feature a dough which uses corn meal instead of fine ground masa powder, and, most notably, Delta tamales are simmered in cayenne leaden pots rather than steamed. Tamales throughout the Delta are long and slender unlike those of Mexican tradition which tend to be a bit thicker. In some kitchens, the traditional corn husk is exchanged for waxed paper. Typically, the tamales are tied into bunches of three and sold by the dozen. Though cheap to produce, the food is hearty with plenty of carbs and protein to sustain you through a day of labor – leading to its popularity throughout the agriculturally-focused region. 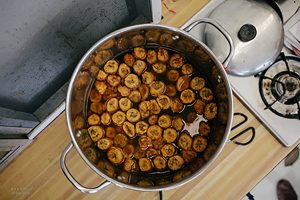 Delta tamales are simmered in cayenne leaden pots rather than steamed. Photo by Averell Mondie.

While the Delta hot tamale is most frequently associated with the state of Mississippi, we are lucky to have many outstanding examples of the tradition on the Arkansas side of the river. These stands represent a tradition of the tamale trade once so common throughout the landscape of the Delta. While the tamale stand might not be as prevalent throughout small towns in the Natural State, some have endured and today you can easily get your hands on a dozen (or two) of these tasty bundles of our culinary history.
Rhoda’s | Lake Village, Arkansas
In an old white shack under a grove of walnut trees in Lake Village sits Rhoda’s Hot Tamales and Pie’s. Just across the river from Greenville, Miss. (home of the Delta Hot Tamale Festival and many renowned tamale institutions), Rhoda Adams and her family have been serving their chicken and beef tamales to locals and tourists alike for over 40 years. Originally selling her foods for her church, she quickly became a local phenom. In true Delta fashion, Miss Rhoda, as Adams is affectionately referred to, produces a spicy tamale with a greater moisture content and spicy broth, much like those found in Mississippi. While the tamales alone are worth the trip to this south Arkansas town, don’t miss the half-and-half pecan and sweet potato pie while you’re there.
Pasquale’s | Helena, Arkansas
With a dedication to freshness and tradition, Joe St. Columbia has become famous throughout the region for producing a fantastic tamale which people from all around come to experience. Drawing more on the Mexican tamale tradition, Joe’s hot tamales feature a thicker masa, and an overall more toothsome product. The secret, or more accurately, one of the secrets he tells me, is in the broth the tamales simmer in. Joe tells me that he uses a handful of Italian ingredients to add a nuanced level of flavors to the final product, just like his grandfather did. Joe usually sells out very quickly, so be sure to arrive early.
Lackey’s Smokehouse Restaurant | Newport, Arkansas
Though Mary Lackey’s Newport tamale stand is no more, her original recipe lives on at Lackey’s Smokehouse Restaurant. The recipe, which calls for chicken and a heavy hand of cajun spices, was nearly lost to the ages but rescued by the owners of Lackey’s Smokehouse. With plenty of heat, we are all lucky that these tamales are still being plated and served in the Natural State. Word has it that Miss Lackey has given her approval to the new place, as well.
The Tamale Factory | Augusta, Arkansas
The Tamale Factory off of Highway 33 in Augusta is not nearly as old as some of the Delta’s more renowned tamale stands, but it continues to contribute to that incredible legacy. It was opened by George Eldridge, owner of Little Rock’s famed Doe’s Eat Place, who had for years shipped in tamales from Greenville. Here, beginning at 5 a.m., each weekday morning, the Delta tamale is made and refined.