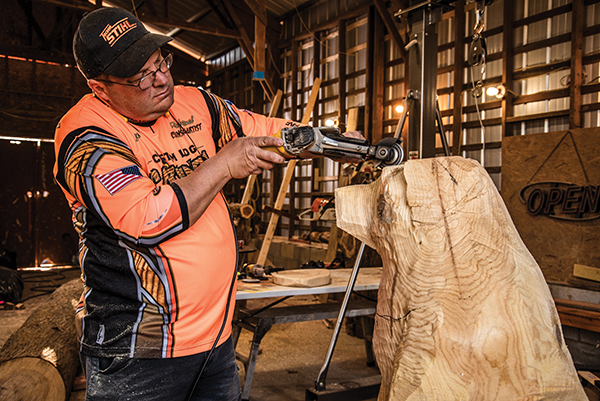 Few people come to something as naturally as Lee Halbrook took to his craft. The North Little Rock native has the artistic acumen of an Arkansas Bob Ross; but instead of paintbrush strokes begetting trees from happy little accidents, Halbrook wields a chainsaw and shapes awe-inspiring sculptures from solid wood.

“I guess it really all started when I was six years old,” Halbrook says over the phone as he makes his way out of town to see about his next project. 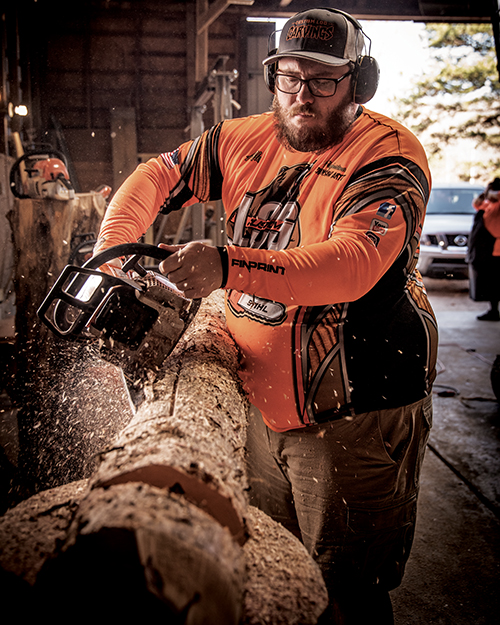 Inspired by having seen someone whittle away at a small piece of wood, Halbrook asked his father for a pocket knife. Rightfully hesitant to put a blade in the hands of a child, his father declined.

So, Halbrook found the closest alternative. A piece of chalk from school would be much easier to shape with the sort of tools he could get his hands on, so that became his medium. He started whittling chalk into figures and selling them to classmates for quarters. He probably didn’t realize at the time that doing so would be the start of a fulfilling career.

He sold out of his inventory, and Halbrook asked his father to take him to the store to buy more chalk. Not knowing what his son had been up to, the elder Halbrook was surprised, and impressed, to learn that Lee had not only found a way to make carvings from what he found around him, but also that he was able to earn enough money to buy the supplies he needed to make more. 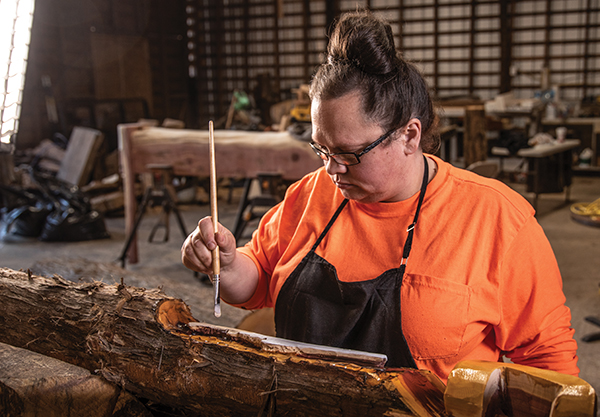 They went straight to the store to buy more chalk. And that Christmas, Halbrook was gifted his first pocket knife.

It would be a few more years before Halbrook jumped into the trade with both feet. He spent more than a decade working as a dental technician, working with tools that helped him hone his attention to detail. He would then take his natural artistic ability to the field of taxidermy, working as what might be referred to as a “finished artist.” Working full time in that role, he was tasked with making his subjects look alive again. There, too, he would apply his skills to wood mounts, gun stocks and other projects that kept his creative juices flowing.

It wasn’t until a call came from a friend and neighbor that Halbrook would take his skills, and his vision, to another level. 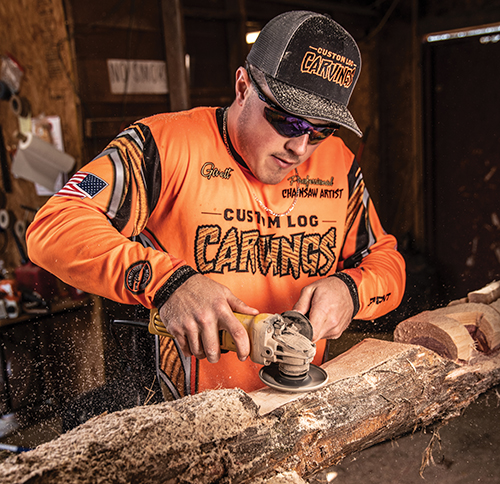 “I had a friend call and ask if I might be interested in working on this stump in her yard,” he recounts. “Her father had passed away a little while back, and it had been a wish of his to have that stump turned into an eagle.”

“Well, that’s just fine,” he thought. But he didn’t have a chainsaw. And he had never carved with one, either.

“I agreed to do it,” he says. “And the price would be one chainsaw to do it with.”

And as had been the case with just about everything else he had tried thus far, Halbrook proved to be a natural at chainsaw carving. Like Michelangelo chiseling away at a block of marble, Halbrook’s new chainsaw unlocked a beautiful eagle from inside an old stump.

His work on that inaugural chainsaw carving caught the attention of the community. He soon had another commission. This time it was from the city of North Little Rock.

In a 2018 interview with KTHV-Channel 11, Terry Hartwick, then director of North Little Rock’s Department of Parks and Recreation, said he saw Halbrook’s stump-turned-eagle and was in awe. “I saw Lee doing some eagles and so I drove up to him, introduced myself, and I told him I was going to make him famous,” Hartwick told a reporter at the time.

Hartwick tasked Halbrook with turning a dead tree at the Burns Park Golf Course into their own “putter boy.”

“If you’re familiar with Pinehurst, you’ve probably seen or heard about putter boy,” Halbrook says of the iconic bronze statue, also known as “The Lad,” that has stood at the historic Pinehurst golf course for more than a hundred years. “Well, they wanted me to carve our own putter boy at Burns Park.” 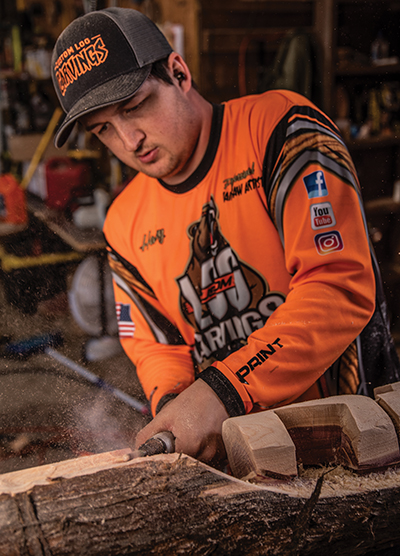 And that’s exactly what he did, turning a tree waiting to be cut down into North Little Rock’s very own iconic golfing lad. It took 88 hours in total. “Putter boy has gotten more comments than you can ever imagine,” Hartwick said in that THV11 interview. “People love putter boy.”

Somebody, perhaps, loved putter boy too much.

Not long after the masterpiece was complete, Halbrook’s work was vandalized, and the vandals stole lad’s hands and club. Halbrook calmly told reporters following the incident, “I don’t hate them for what they did. … I feel sorry for them.” And then he went to work restoring the work of art.

Hartwick kept Halbrook busy, tasking him next with crafting a sign for North Little Rock’s historic Old Mill. Halbrook made a sign out of a tree that included an ornate drawing of the Old Mill. It was then that his skill began to catch the eye of others outside of the region, and he began working on commissions for clients from across the globe.

That was in 2018. And in the time that spanned from then and today, Halbrook continued to spend most of his working in taxidermy and relegating chainsaw carvings to part-time activities. But a few months back, he got the call, and the invite, to pursue his passion full time.

Halbrook was invited to set up shop full time at Pickles Gap Village, a unique roadside shopping village that pays homage to German immigrants and settlers along Highway 65 in Faulkner County that features a fudge factory, flea market, knife shop and more.

For an artist like Halbrook, it was the studio he needed to thrive. It was a no-brainer. There, he’d join forces with Alex Ward and Don Nichols, the three of whom make up Custom Log Carvings.

At Pickles Gap, Halbrook has been honing in his skills — not that they ever needed it. In recent months, he’s turned large pieces of wood into elaborate sea turtles, elegant birds, and even a few SEC mascots. Over the holiday season, he brought to life a wooden Tom Hanks as the conductor of the Polar Express. 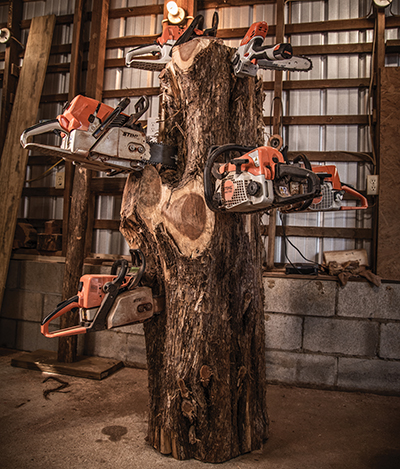 Each new project is an adventure for Halbrook. Part of what makes him so special is that he sees the finished product in a raw chunk of wood well before he makes his first cut. “I can look at a piece of wood, and I can see in it what I want to carve,” he says. “It’s already there. I just have to get it out.”

Unlocking his vision from each piece of wood he works on is incredibly fulfilling for Halbrook. But none of his works to date have been more fulfilling, he says, than what he was able to create for Easterseals Arkansas in Little Rock.

Easterseals Arkansas is a nonprofit organization that provides critical services, education, outreach and advocacy so that people with disabilities can live, learn, work and play in their communities. A tree in the courtyard of their facility off Highway 10 in west Little Rock had died, and they reached out to Halbrook to see what he could do.

“That is, by far, the project that most resonates with me still today,” he says. “I told them, ‘I would like to turn this into something from Winnie the Pooh.’ I could see it: Pooh at the bottom, holding up Eeyore; Tigger doing a handstand on Eeyore’s head, with Piglet propped up on his feet at the top. They couldn’t see it at first, but they said, ‘OK, do it.’” 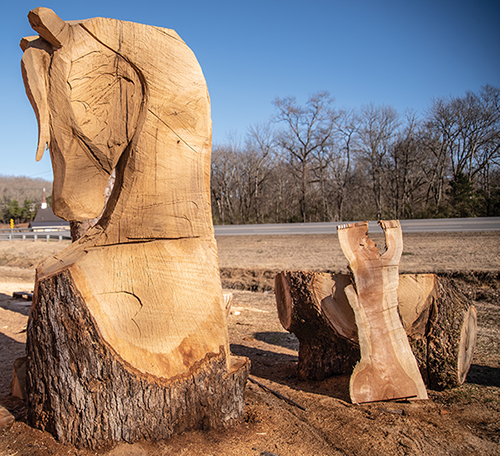 And he did it, bringing to life the beloved A.A. Milne characters from hard, dead wood. As he was cleaning up his work and collecting his tools, the administrator who had commissioned the work stopped him. Unbeknownst to him at the time, Halbrook had an audience while he worked on the cartoon carving.

“She said, ‘I’ve got some things for you,’” he recalls. “She handed me several drawings and cards from the kids who had been watching me the whole time through the window, thanking me. I get choked up even thinking about it because that was special to me. I cherish those, and that was by far the most special work to me.”

While he’s modest over the phone, it takes no time to realize that Halbrook is no fly-by-night chainsaw carver. He’s an artist in every sense and across many mediums. Scroll through his Instagram or his Facebook and one would find incredible sketches, relief carvings, etchings and more. It’s a wonder it took as long as it did for this career to find him. 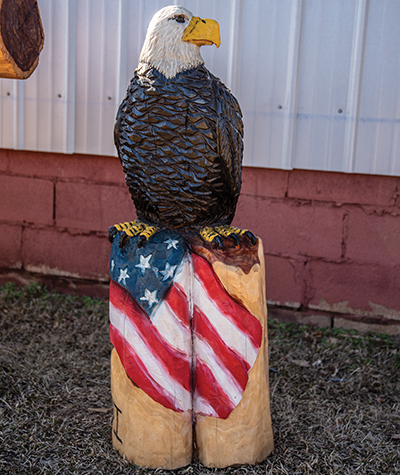 And now that he’s settled into his new place of business at Pickles Gap, Halbrook is just as much mentor as he is artist. Now considered one of the best around at his trade, Halbrook is passing on his knowledge to the next generation of chainsaw carvers, teaching them how to turn dead wood into living art that they can sell and make a living.

Halbrook encourages anyone, whether they be in the market for a piece of art or interested in taking up the trade, to come see him. You wood knot regret it.