By Dwain Hebda  // Photos by Meredith Mashburn and Jamison Mosley 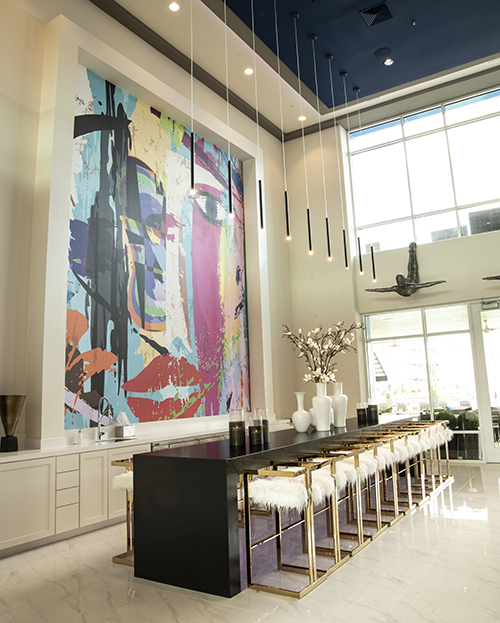 For Heather Graves, community director for The Pointe Bentonville, it’s all about the details.

She and her staff serve one of Northwest Arkansas’ most exclusive apartment complexes where each unit in the luxury development bursts at the seams with amenities. Nothing is built to be average here, not even the water closets.

“Our bathrooms are insane!” Graves gushes. 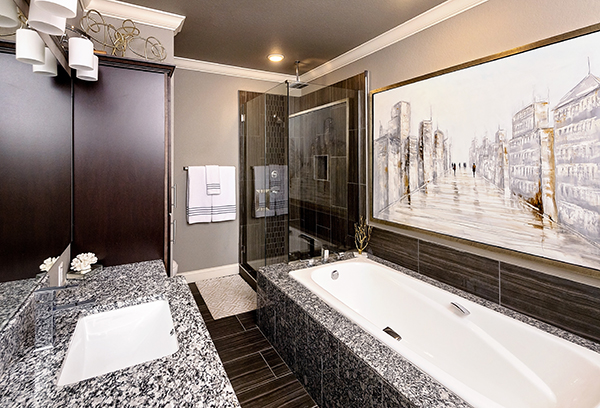 The Pointe Bentonville is part of a hot trend in Arkansas’ multifamily living market, the luxury apartment home. Built to deliver the resort experience, the stylish Bentonville development offers features that redefine apartment living. First opened in 2017, The Pointe was an immediate hit, creating a long waiting list that fast-tracked additional construction to get more units open this year.

“Every property manager’s goal is to build a community,” Graves says. “When you go to other apartment communities, you get together with your neighbors maybe once a month. Our residents are seeing each other weekly at our events. So, they’re really able to form those relationships. COVID is cramping our style a little bit right now, but I’d still say what really sets us apart are our events.” 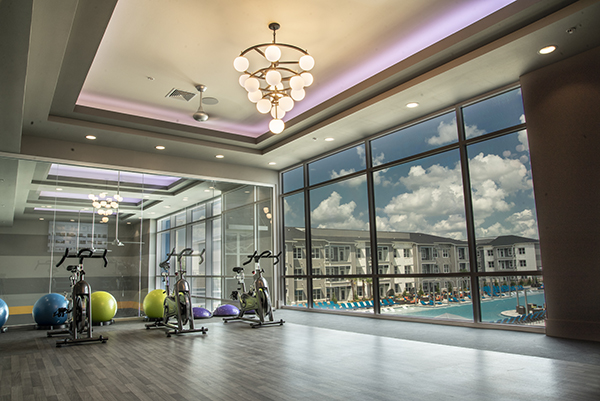 Activities are a way of life here, as The Pointe Bentonville and developments of its kind feature entertainment as part of the experience. The development is located in one of the city’s most happening neighborhoods offering dining and attractions within easy distance. The Pointe’s stately clubhouse offers a variety of activities and serves as the center of life in the community.

“We’ve got everything from a wine room to a poker room to a movie theater, and we’re really known for our Thirsty Thursday events,” Graves says. “We’re also different in that we have an on-site concierge. And, our clubhouse is open late, so our residents are able to access our amenities every day until 10 p.m. That’s a really big selling factor.”

The Pointe Bentonville, along with other sparkling, amenity-laden living options popping up in Arkansas of late, is part of a national trend in multifamily living that has dominated the housing market over the past five years. According to Yardi Matrix, a real estate data and research organization, 75 percent of new apartment construction in 2015 were of the high-end luxury category, up from 46 percent in 2012.

The trend showed even steeper growth through the first half of 2018, per RentCafe, where 87 percent of new builds fell into the luxury category, led by Texas and Oklahoma at 88 percent and the eastern metropolis at 87 percent. Midwestern and western states averaged 82 percent in the luxury range and New England/Northeast 81 percent. 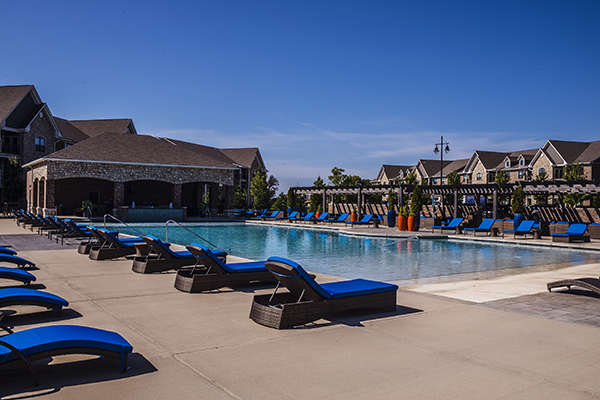 In Southern states including Arkansas, eight out of 10 apartment buildings were of the high-end variety. But unlike other states, Arkansas makes that luxury relatively affordable.

“We’ve definitely raised the bar. By no means is this a standard apartment complex. People are surprised because they get an opportunity to live very well for not a lot of money,” says Garry Mertins, who designed The Pointe North Hills in North Little Rock. “I met a couple from Russellville who said, ‘We sold our house. We can live here for $1,500 a month. We’ve got three bedrooms, three baths, a garage and WiFi, cable and we’re only here six months out of the year. The other six months we just lock the door and forget about it.’ 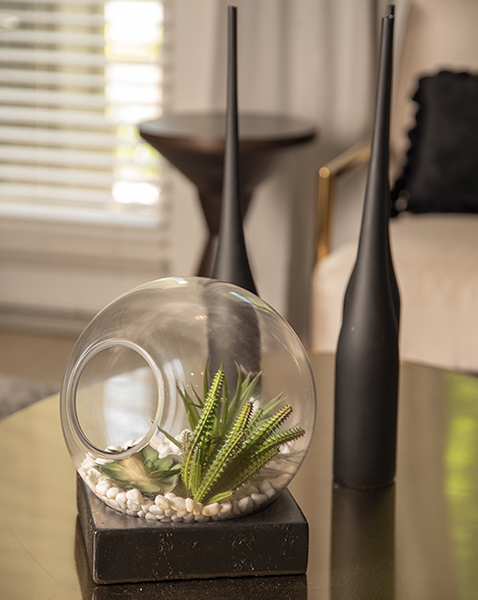 “I just moved some clients up to New York about six months ago; they’re spending half their time there, half their time in Little Rock. We found a place in New York City that’s very similar to [The Pointe], it had two bedrooms, two baths, living room, dining room, kitchen — for $10,000 a month.”

The grand North Little Rock property is attracting all shapes and sizes of tenants, from young professionals to families to seniors. Mertins says residents are drawn to the high-tier appointments in the apartment homes themselves and the wide range of programming and community amenities available, all under one roof.

“We set this up for really high-end resort living disguised as a nice apartment complex. You literally don’t need to leave once you get there,” Mertins says. “We have a luxury clubhouse that offers a big conference room available for the tenants to use and a 30-foot bar where they can gather.

“We have a huge workout facility with Hammer Strength equipment, top of the line. We also have a virtual workout room. And then, we have kind of a ‘Zen room,’ which is sort of a study room with sofas, desks and chairs. We also have the largest private swimming pool in Arkansas.” 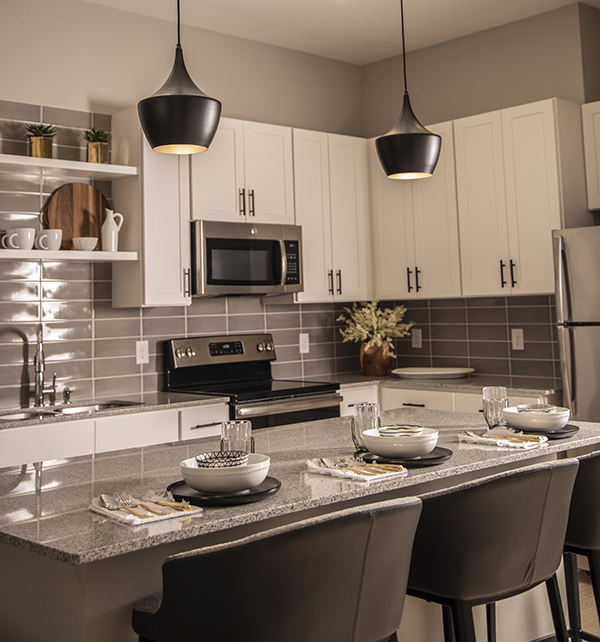 The newest of Little Rock’s high-end properties, The Fitzroy Chenal provides a stylish enclave near one of the fastest-growing commercial sectors in Little Rock. Veronica McKnight, leasing manager, says proximity to area shopping and services have driven demand for the two-year-old property.

“Tenants are looking for work and play nearby,” she says. “One of the top things we get asked about is controlled access — we’re a gated development, so that draws a lot of people in. Plus, we’re new; all of those features really draw people to our property. 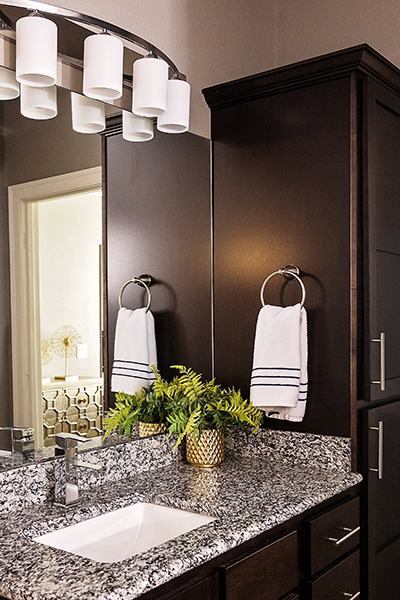 “We have a waiting list now for our three-bedroom units. Normally we’re at 100 percent occupancy overall, but right now occupancy is at 97 percent, which is still good.”

The Fitzroy boasts dramatic street appeal, so much so that prospective tenants are surprised to find out how much value they get for the money.

“Utilities are included in the rent, pretty much everything except for electricity and cable,” McKnight says. “Plus, the buildings were built to be very energy-efficient, so that helps keep the electricity bill down.”

Management goes to great lengths to ensure residents are taken care of, day and night. The Fitzroy offers a concierge service until 9 p.m. nightly and features 24-hour courtesy officer, maintenance and housekeeping. And even COVID – 19 has had a tough time putting the brakes on the property’s social agenda, thanks to an experienced staff who have created events that can be enjoyed responsibly.

“We’ve been doing a lot of virtual events; we had a wine pairing event where we went live from our wine room,” McKnight says. “We actually dropped off wine kits and cheeses to our residents so we could all do that together. We even had a quarantine party where the residents who have the courtyard and pool view could come out on their balconies and dance with us.”