There’s something about the feeling of seeing all of your hard, nose-to-the-grindstone work finally come together enough to glimpse the finished product. For local country singer and performer, Donnie Lee Strickland, that shiny thing over the horizon is just the beginning, and it started with years of hard work.

Before finding himself in Arkansas, Strickland was a theater performer in the American Music Jubilee show at the Rudy Theater in North Carolina, which is where he learned one of the most important lessons for his career in music.

“That show taught me a lot about performing, a lot about face presence and harmonies, and developing a good ear, and also singing from [my] heart.” Strickland says. “It’s easy to get up and sing, but you have to sing from your heart, you know, your gut. That’s taken years to learn and years to do.”

It’s the heart behind the music that carried Strickland through a year of performing in Branson shows and ultimately, carried him here to continue his career in the Natural State. So, while it’s taken time to grow his fan base here, he takes each and every chance to connect with them.

“Everywhere we go, we embrace a new audience that has maybe never heard of me or never seen me, but then they come to the show or follow me on social media and see what we’re doing. They stay connected and they come next time and they bring friends or they bring coworkers,” Strickland says. “Performing local and at home where you live, it’s taken me 5 years to gain these local, Arkansas fans and I worked hard at it and I respect it and I value everyone that’s here and I value the friendships. I call my fans friends, because everyone that shows that much interest in me and wants to support me and love me – they’re friends. They’re family.” 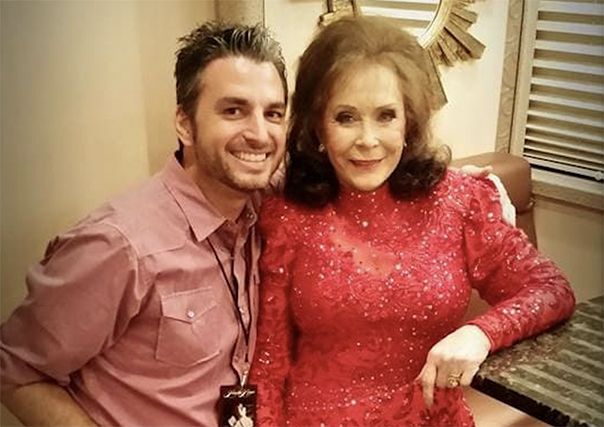 In the last two years, Strickland has had the opportunity to perform all over the state. He says you can travel everywhere and see things and meet people, but there’s nothing quite like “the home crowd.” Through growing his own home crowd, Strickland has come across a number of opportunities to connect with his Southern community.

He and his team participate annually in the Christmas 4 Kids Bus Tour in Nashville.

“It’s like trick or treating, but instead of going to houses for candy, [kids] go to buses for pictures and autographs,” Strickland says.

He’s also been a part of helping with recent flood relief efforts in Arkansas including volunteering with Triton Relief at the Perry County fairgrounds cookout to feed flood victims and first responders as well as performing in the flood benefit concert at the Rialto in Morrilton.

“I’m very tenderhearted, so any charity that does good for the better, I want to be a part of it. I want to help out,” Strickland says.

Strickland’s tenderheartedness has even led him to some of his greatest accomplishments as a musician thus far, including the release of his new single in honor of his recently passed grandmother, “I Just Want To Go” written by Shane Thornton, Jim Wallis & Allan Bisbee.

“I heard this song probably two years ago and I contacted the songwriter and begged him for the song – it really hit home for me,” Strickland says. “I thought, if it hits me like this, then it’s gonna hit other people because everyone has someone in their life, a loved one, that has passed away.”

The video is currently Strickland’s most-viewed on his YouTube channel, surpassing 1,000 views.

“You’re kind of taken more seriously when you have got that kind of resume, so we’re very blessed and lucky to do what we do as an independent act,” Strickland said.

He and his team recently submitted a performance video to KSSN 96 for their Homegrown Country Show’s 10th anniversary concert contest. The five acts with the top votes by mid-September will perform on the Steve Landers Dodge Main Stage on October 12 at the Arkansas State Fair before the Craig Morgan concert. They’re also working on a new album that they hope to be released by the first of the year, along with some other shows.

“We’re in the works of putting together something that’s like an ultimate country music show that would take you from the 1960s up to current all in one show,” Strickland says. “We’re also in talks of doing a Conway Twitty and Loretta Lynn show.”

With a great team and a good attitude, the hard work seems to be coming to fruition and the goodness keeps falling right into Strickland’s lap.

“For the first time, I’ve been offered to work with a lot of great musicians… One of the guys who wrote a big hit for Rodney Adkins, he sent me a handful of songs,” Strickland says. “To have those people believe in me and give me a chance at their songs is just… it’s very overwhelming at times. I look around and I wake up and I can’t believe it, it’s all happening so fast, but I’m glad to be busy, I’m very blessed to be working as an independent artist and the future right now… it looks good.”