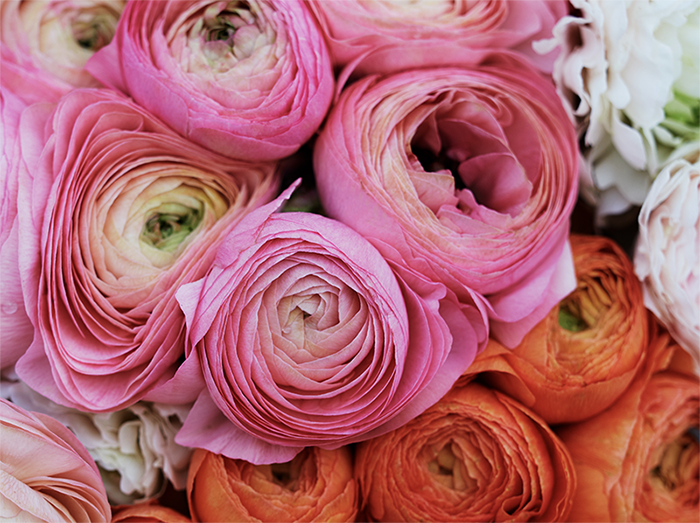 By Joe David Rice
Howard Hurst knows a thing or two about flowers and overseeing a florist business. He is, after all, the third generation to run Tipton & Hurst, Arkansas’ largest flower shop. His grandfather, Joe Hurst Sr., established the business with partner David Tipton way back in 1886. Today, its staff of 75 dedicated employees works from five locations in Central Arkansas.
With Valentine’s Day fast approaching, I asked Howard for some advice on choosing the right flowers for one’s Significant Other (or S.O.). “The number one mistake people make when buying flowers,” he says, “is not really knowing who you’re buying for.” By that, he means to pay close attention to your Valentine’s favorite color, scent or variety. “Slow down and spend some time thinking about what he or she might want, and then place your order well in advance.” And, according to Howard, if you don’t do your due diligence and simply grab whatever’s left over at the last minute, your S.O. will see right through the pretense. “If you care about your love life,” he says, “you’ll make a genuine effort to send the right message.” And that’s what flowers are meant to be: a reflection of one’s sentiments. 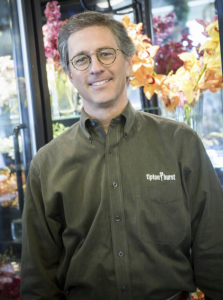 Howard Hurst of Tipton & Hurst is the grandson of Joe Hurst, who, in 1886 started the floral company with friend David Tipton.

In a typical week, women will purchase 60 percent of the flowers sold at Tipton & Hurst. But during the Valentine’s frenzy (and Valentine’s Day is easily the single busiest day in the floral trade), men will buy 90 percent of the flowers and fully half of those will be red roses. Howard has had the occasional male client purchase 10 dozen red roses at once, but he’s still not sure if the customer was trying to impress the woman – or make up for a past transgression. Even though he’s in the business of selling flowers, Howard cautions men to choose wisely and not go overboard, but to be attentive and thoughtful.
Well into its second century, Tipton & Hurst is one of the 25 largest florists in the country, importing flowers from around the world. Its roses come from South America and Europe, orchids from Thailand, carnations from Israel and tropical flowers from South Africa and Hawaii. This global network has resulted in some surprises. The eruption of a volcano in South America several years ago created havoc when the resulting overcast conditions seriously delayed the blooming of acres and acres of flowers which were scheduled for shipment to the United States.
Asked for keys to his company’s success, Howard is blunt: “If you don’t have good people, you’re dead. Surround yourself with talented and passionate people who’ll take care of customers.” Many of his colleagues are long-time associates. A good example is Freda Rice, who’s now been with Tipton & Hurst for 34 years. She began as a clerk and is now “Flower Distribution Manager,” the company’s chief buyer who deals with growers from around the globe.
Over the decades, the Tipton & Hurst team has delivered millions upon millions of flowers with only the rare mistake. When one order was inadvertently given to an ex-wife a couple of years ago, she quickly grabbed the arrangement and hurled it to the sidewalk, clearly venting her frustration to the stunned messenger. Wanting to make amends, Howard showed up a short while later with another beautiful vase, hoping the lady would accept his sincere apology for the error. Shaking his head, Howard tells me it immediately suffered the same fate as the original delivery. Just last month, he climbed into a company car and personally carried an order to a customer in Pine Bluff. It wasn’t necessary for the president of Tipton & Hurst to do that, but his gesture meant a lot to the family. He shares an observation he’s learned throughout his career: “You’re only as good as your last delivery.”
Despite the infrequent setback, Howard enjoys his job, noting the satisfaction of helping people through some of the biggest moments of their lives. It’s not unusual to have customers representing the second and even third generations of their families. At the same time, he wants any budding florist (pun intended) out there to realize that it’s a tough business. “There’s a lot of easier ways to make a living,” he says. Dealing with a fresh and perishable product can create lots of pressure. And during peak times – such as Valentine’s Day – he and his colleagues have been known to pull the dreaded all-nighters.
The Tipton & Hurst crew is proud of its community support. They’ve been involved with Tabriz, the Arkansas Arts Center’s biennial fundraiser, since its inception, along with contributing to many other non-profits in Central Arkansas. And the staff just completed its responsibilities for Gov. Asa Hutchinson’s inaugural gala, a job that kept many of them up until 2 o’clock the following morning. Howard is quick to remind me that he and his associates have been hired to assist with inaugural galas for both Republicans and Democrats.
Even with the occasional long hours, Howard feels good about the future of Tipton & Hurst. The Internet portion of the business continues to grow and prosper.
Experiments are now underway to allow the firm to locally produce some of its own flowers, using a “Farm to Vase” approach. As to whether or not a fourth generation will eventually take over, Howard has told his children to avoid that decision until they’re in their thirties.
I’d be remiss if I didn’t mention that Howard’s wife, Stacy Hurst, works in the Hutchinson administration, serving as director of the Department of Arkansas Heritage. Before her appointment to that position, she was heavily involved in the Tipton & Hurst operation where her managerial skills were put to use. In fact, when Joe Hurst Jr., first met his son’s fiancée, he immediately recognized her talents. “She’s perfect for you,” he said. “She’ll keep you organized and on track.” His father, of course, was right, and Stacy’s been a vital member of the team ever since.
Howard assures me that Stacy will definitely get flowers on Valentine’s Day, although he didn’t tell me what kind. But he did mention that his favorite flower is ranunculus.
READ MORE: This Valentine’s Day, Try a Galentine Party!