For The Love Of Money

Story and photos by Frank Fellone 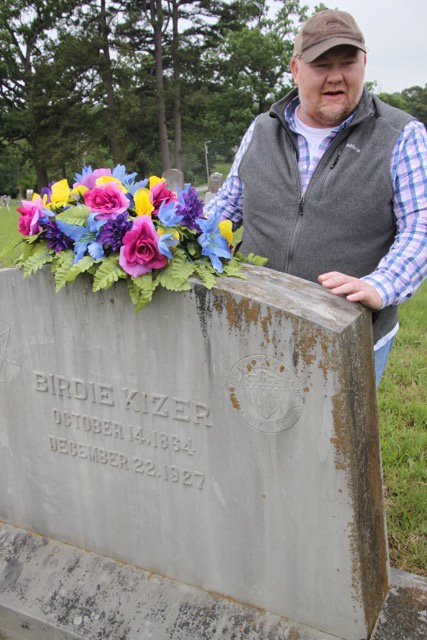 Come along on the John R. Kizer murder tour, a Danse Macabre for a man who killed 10 people and then himself.

He did it all for the money. Except for the last, the suicide. That was for fear.

Our tour guide is John Allen French, 35, this Black River town’s burliest florist. He loves everything about Pocahontas, but especially its history.

And history records that Kizer killed these 10 people:

His first wife, Birdie Brooks, a widow married to Kizer for eight years until her death.

Elmer Anderson, a rancher whose wife, Martha, was coveted by Kizer. After Elmer’s death, Kizer proposed to Martha. Lucky for her — she declined. 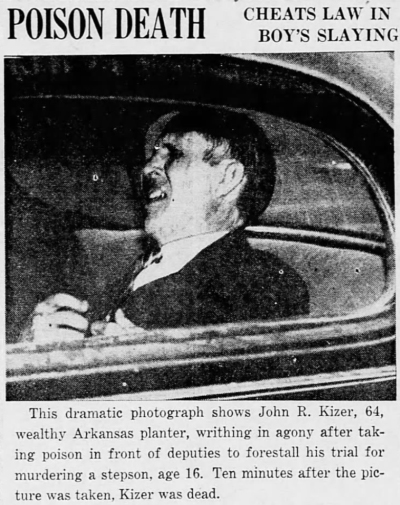 Mr. and Mrs. Robert Riggs, farmers and relatives. She was his niece and died first. Her husband died after Kizer willed all his possessions to Riggs, who unwisely reciprocated.

Lizzie Robinson and Willa Brown. Aunt Lizzie was a distant relative of Kizer’s. She suggested he take care of the two little old ladies. Aunt Lizzie’s proposition was that whatever was left of their estates would go to Kizer after their deaths.

Rozena Bonner Arnold, John Kizer’s last wife, a widow whose husband had left her farmland and other valuable property; her parents, Mr. and Mrs. M.E. Bonner; and her son, Bonner Arnold.

All these unfortunates were killed from 1925 to 1936, likely by poison administered by Kizer as medication. Kizer was the first county agent of Randolph County, a prominent, respected businessman, and a veterinarian at a time when veterinarians weren’t always licensed and routinely treated people as well as animals.

Most of Kizer’s victims were diagnosed — by him — with malaria. A local doctor may have been complicit with some of the diagnoses, his palm greased by unusually large fees. Invariably, Kizer insisted on swift embalming and burial.

That’s the back story. The murder tour starts on a warm day in mid-May at the historic Randolph County Courthouse on the square in Pocahontas, where Kizer was headed while in police custody on the last day of his life. Across the street, at the county clerk’s office, Kizer’s handwritten last will is kept.

That’s the penultimate stop. Now the first, a few blocks from the town square. It’s a meadow, stretching into the distance, called Kizer Field. It’s where residents paid Kizer to allow their cattle and goats to graze. It’s also where airplanes would land and take off, fliers giving rides for a nickel.

Kizer, generous in spite of his other faults, would pay for kids who didn’t have a nickel.  He never had children of his own, instead marrying women who did. French described Kizer as tall, a man who wore a big hat, and who was always dressed up as befitted a businessman who owned a pool hall, a movie theater and plenty of land. French gestured expansively away from the field and toward a neighborhood. 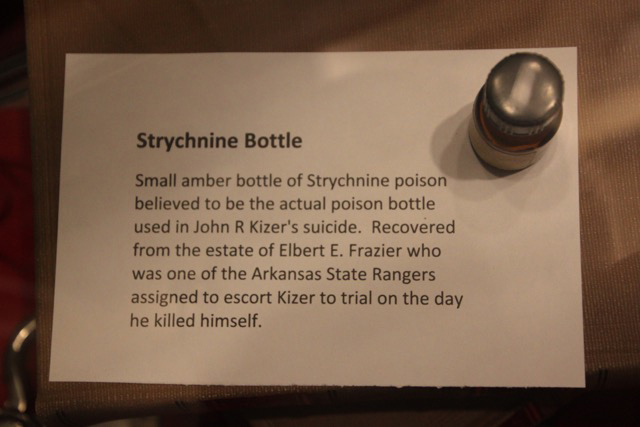 The bottle of poison Kizer supposedly used to commit suicide.

The next stop is the house Kizer built for Birdie, his first wife, an imposing woman whom French contends Kizer must have loved, because of the memorials Kizer had made in her name. Love or not, this house — dilapidated and overgrown now — was where Kizer injected Birdie with a poison that made her arm swell to a horrible size and led to her death. That she was murdered must have been inconceivable to the townspeople. Birdie and John, French says, “were a Pocahontas power couple.” Her death came shortly after her doting husband bought an insurance policy on her life.

Others perished in this house, French says.

Now over to the red-brick First United Methodist Church of Pocahontas. Here is proof of Kizer’s love for Birdie. Inside the church is a stained-glass window in her loving memory, and so inscribed. At some point over the decades, French said, John Kizer’s name came off the window.

“In my mind he really loved Birdie,” French says. “But he wanted so bad to be rich and powerful. He grew up dirt poor and strived to be important.”

Back through the town square. On one corner is an office of Edward Jones Investments. Back in Kizer’s day it was the Arkoma Café, where a local woman with serious suspicions accosted two insurance agents who were selling multiple policies to Kizer — policies which covered numerous of his relatives who died before their time.

Down the street is a parking lot, once the site of the Randolph Hotel, in the basement of which was the Little Flower Hospital. It was here where Kizer’s body was taken. Townspeople, French says, looked in the windows to see the body as it twitched.

The saddest stop is the Masonic Cemetery, where many of Kizer’s victims are buried. Here are Birdie’s grave and headstone, the latter topped by a floral arrangement.

“I keep flowers on her grave,” French says.

Another part of the cemetery has the bodies of Rozena Bonner’s parents and a grave with a bright new headstone. “Bonner Arnold Kizer,” it says. “Aug. 26, 1920. Oct. 21, 1936.” In the center is a football and the letters PHS — Bonner was a football player at Pocahontas High School.

“There had never been a funeral in Pocahontas like there was for Bonner,” French says.

It’s here that French pulls out two long, thin, L-shaped metal rods. He’s dowsing for graves. Hold the rods out loosely in the hands, he says. If the rods cross, a body is buried there. The dowsing seems to work.  Now hold one rod perpendicular to the ground. If it moves one direction, the body is male; in another a female. French judges one grave, previously unmarked, to be Bonner’s. French says he and a friend had the headstone made for what they believe is Bonner’s grave.

The next stop is the office of County Clerk Rhonda Blevins. Clerks’ offices are treasure troves of local history, and Randolph County is no exception. It takes a few minutes of searching before Blevins finds a file from the 1930s. Inside are legal documents of John R. Kizer, including his will, written in pencil on lined notepaper. In the will, Kizer bequeaths all his possessions and property to his five brothers and sisters. The will is dated Nov. 19, 1936, the day of his death at age 65.

The law finally caught up to Kizer. For his safety, he was held in the Greene County Jail at Paragould, as the people in Pocahontas were much too agitated. On Nov. 19, he was to be driven to Pocahontas under custody. At Walnut Ridge, the group stopped so Kizer could get a shave at a barbershop. He asked for something to drink and took a soft drink into a bathroom. Fourteen miles later, at the courthouse in Pocahontas, whatever poison Kizer may have taken effect. Newspaper photos show him in the back seat of a car, grimacing in pain. He was carried into a doctor’s office by police, including Arkansas Ranger Bert Frazier, and died.

That brings us to the final stop, the Randolph County Historical Museum.

Inside a glass display case is a small glass bottle believed to be the bottle of strychnine Kizer used to commit suicide. The bottle was donated by Elbert Frazier of Jonesboro, son of Ranger Bert Frazier. The elder Frazier was one of the original Rangers, who later became the Arkansas State Police. He was later police chief of Jonesboro.

Elbert Frazier says the bottle came from a box of “odds and ends” of his father’s career. The younger Frazier gave the bottle to the district office of the state police, and it found its way to the museum.

Why did Kizer kill himself? French believes it was fear of being lynched. He’d seen the lynching of a man who killed a Randolph County deputy sheriff.

“He wanted to be rich and powerful,” French says. “That’s the only thing that makes sense to me.”