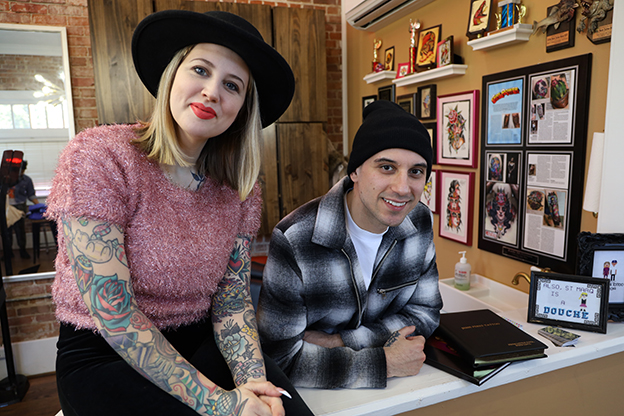 Katie McGowan’s collection of tattoos is dazzling. The 33-year-old tattooing reality show veteran and elite artist displays multiple piece of artwork on her body, all from the neo-traditional school of design. That is, a fresh take on an old-school art form.

“I remember when I was really little, I would draw just on random pieces of paper,” McGowan says. “I remember asking for these Rose Art sets where they put in a pack of colored pencils, sketch pad and some water colors, some markers. They were probably $10 or $15 in the early ‘90s. They were just the best gift; I would mess with it and tear it up.”

“I would always redraw cartoons I’d watch – Rugrats, Bart Simpson, all of that – and redraw them a million times until I got it perfect. I remember Bart having like nine spikes of hair on his head. Just really trying to study it, like, can I make these look exactly like how you see them on TV.”

McGowan’s obsession with ink is an apt representation for her shop, Love Spell Tattoo, which she opened in July with her 27-year-old apprentice–turned–business partner Jesse Perez. There are older, more established tattoo parlors in Little Rock; bigger ones and harder-edged ones, too. But there’s no shop anywhere in the state quite like Love Spell Tattoo’s brightly-lit space on a corner in the bustling Stifft Station neighborhood. 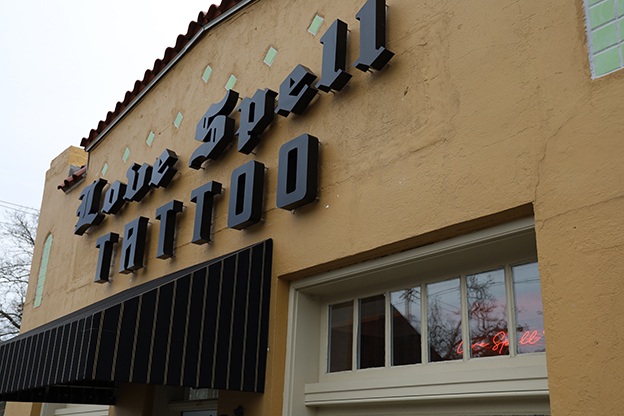 There was a time when tattoos were so countercultural, you could only find them in the rougher parts of town – near piers, biker hangouts and low-rent neighborhoods where the whiff of danger lent a certain cred to the ink. But in recent times, tattoos have shed much of their taboo and with that, shops have begun to branch out to better reach their rapidly-expanding audience.

“When people come in here, they typically have seen our Instagram,” says Jesse. “They’ve seen the work we do and they come in here and they’re like, ‘I want to be tattooed by Katie,’ or ‘I want to get tattooed by Jesse.’ I don’t see it as a specific gender or ethnic or anything like that, me and Katie just have such different styles.”

Love Spell is a prime example of everything that’s evolving in the world of tattooing. It’s rare to find a woman-owned shop and while the number of female artists is growing, they are still far outnumbered by men. Despite its tiny size, Love Spell also checks gender, racial and ethnic diversity boxes such that anyone who walks through the door finds something in common.

“It was important to me to open my business with a minority,” McGowan says. “I feel that it really reflects on our clientele, honestly. This is the most diverse clientele I’ve ever been lucky enough to experience and I’ve been working in tattoo shops since 2005. I feel really grateful for it because that was one of the goals for opening the shop.”

“I think part of it is the location, which was really intentional. We wanted to create a space where everybody feels comfortable coming through here.” 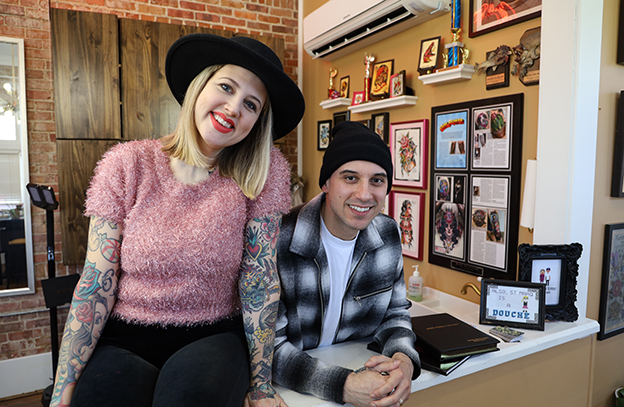 At first glance, McGowan and Perez appear radically different but upon closer inspection there’s more commonality here than meets the eye. Both grew up in Arkansas; McGowan in Conway and the California-born Perez around central Arkansas. Both showed an early aptitude for drawing and both fell in love with tattoos at an early age.

“I grew up with very gangstery uncles,” Perez says with a wry grin. “All my dad’s family is from LA and I always grew up looking at them and that big Old English (script). I grew up very chicano, lowrider, just that style of life always interested me. I grew up by a tattoo shop in Hot Springs and I remember riding my bike up in there and taking pictures and stuff on the wall. I just always thought the art from was cool. But it seemed impossible, like, how am I going to make a living, you know?”

Unlike Gowan, whose path into tattooing was fairly linear, beginning in college with a Conway shop, Perez detoured into other professions before finding his true calling. He was involved with running his parents’ Hot Springs taco truck and was enrolled in school at UAMS. One day he realized just how unhappy he was doing what he was doing.

“I didn’t really like school; I wasn’t good at it. Good enough to pass, but I didn’t enjoy it,” he says. “I hadn’t drawn since high school – I did four and half years of college and didn’t take a single art class – and then one day I was like, ‘Man, I think I can still draw.’”

“I challenged myself; I said I’m going to do this one drawing and if it comes out good, I’m going to go ahead and go for tattooing. Either that or I’m going to become a plumber. It came out pretty damn good.”

McGowan, who’s appeared several times on the Ink Masters reality show franchise, was a known commodity in town working in another shop by the time Perez, bolstered by his fateful drawing, walked in looking for an apprentice opportunity. It was a request not taken lightly in tattoo circles; tattoo schools do exist but are frowned upon within an industry steeped in tradition and pride of craft.

“It’s really hard to get an apprenticeship,” McGowan says. “As far as the state is concerned, an apprenticeship ends at a certain point and you just become a licensed tattooer but really, it’s like you never stop learning.” 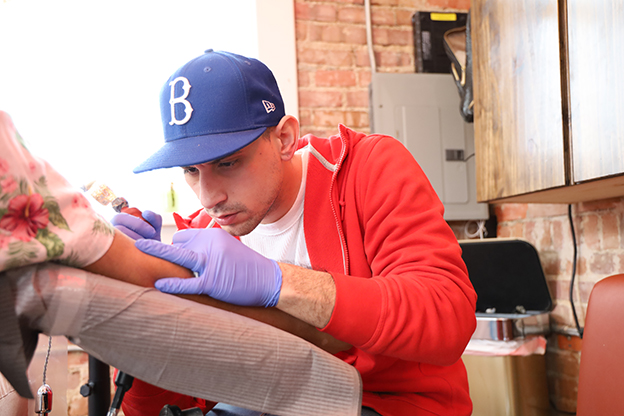 “There’s something really sacred about a one-on-one apprenticeship within a trade, within a craft. And there’s something about really developing that one-on-one relationship and spending hours together until you’re basically family. You’re spending so much time with that person and seeing what they do. When you’re with somebody and getting a one-on-one education you really have those opportunities to absorb everything. There’s something so special about that.”

“When he came into the shop that I was working in, he brought in a portfolio of drawings and you could just tell the natural ability was there,” McGowan says. “What he liked to draw was really different from what people do in this area, which was appealing as well.”

The two got along famously – Perez nicknamed McGowan his “Tattoo Mama” – and when McGowan started seriously considering going out on her own, she approached Perez to come along with her. Love Spell was the result.

“I was getting close my 10-year mark in tattooing and I was like, OK, I was really lucky to have a little bit of a local following before I went on TV. Once I did Ink Masters it just kind of exploded,” McGowan says. “I got to the point where I wanted to keep 100 percent of my money and also create a space where I have a little bit more control over the style and the energy of the space, the music that’s playing, all of the little nuances of a tattoo shop.”

“Plus, just being a female business owner was really important to me. It was a huge goal of mine in this industry that’s so male–dominated, especially within central Arkansas where you don’t see a lot of female tattoo shops for one, and just female–owned businesses in general.” 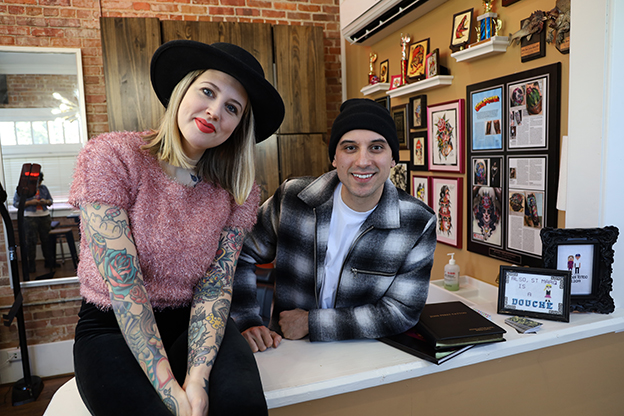 The shop already has 10,000 followers on Instagram; spending a little time here it’s not hard to see why. Love Spell is as approachable as a spa, and as chatty as a salon. The artists’ schedules are full; patrons are drawn by the quality of the work and the cheerful ambiance, which reduces the intimidation factor especially among newcomers.

“What I think is really wacky is how underestimated bedside manner is in tattooing,” McGowan says. “At some point in time for whatever reason, people who tattooed or owned tattoo shops thought it would be cool to be the hardass, like, ‘Yeah, I guess I’ll tattoo you, sit on down.’ I mean, I get it. But if you genuinely care and are kind with your clients, if you have good bedside manner, that really goes a long way.”